A Tribe Called Red to play Sault in May 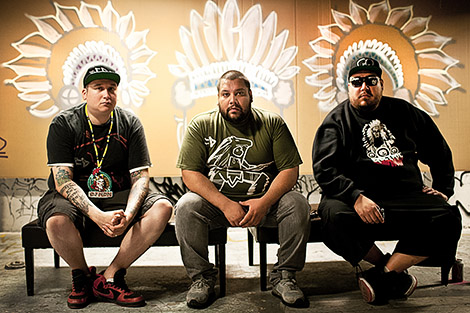 SAULT COMMUNITY
CAREER CENTRE
**************************
SAULT STE. MARIE - The Sault Community Career Centre in partnership with the Sault College Native Student Council, are proud to present A Tribe Called Red as the marquee performance on Saturday May 3, 2014 at the Passport To Unity Multicultural Festival.

This one off performance at Passport To Unity will be the group’s first visit to Sault Ste. Marie, and to have them performing at this year’s festival is a fantastic addition.

What was once an underground following has now poured out into the mainstream arena, most notably with their recent nominations for Breakthrough Group of the Year and Best Electronic Album of the Year for the 2014 Juno Awards.

Melody Chislett, president of the Sault College Native Student Council is thrilled that the group’s first performance in Sault Ste. Marie will be held at the brand new Student Health and Wellness Centre on the college campus, and can’t wait to open the doors to welcome everyone to what will be an awesome show.

The music world is standing up and taking notice, and the results have been staggering.

Their self-titled album, released in March 2012, was long-listed for Canada’s prestigious Polaris Music Prize and included in the Washington Post’s top 10 albums of the year.

Their second, and most recent full-length album was released in May 2013, Nation II Nation was nominated on the shortlist of the Polaris Music Prize as one of the 10 best Canadian album of the year and four APCMAs (Aboriginal Peoples Choice Music Award) for best group, best producer, best album and best cover art.

By taking traditional elements of their culture, they have added their 21st century spin that has catapulted the group to worldwide recognition.