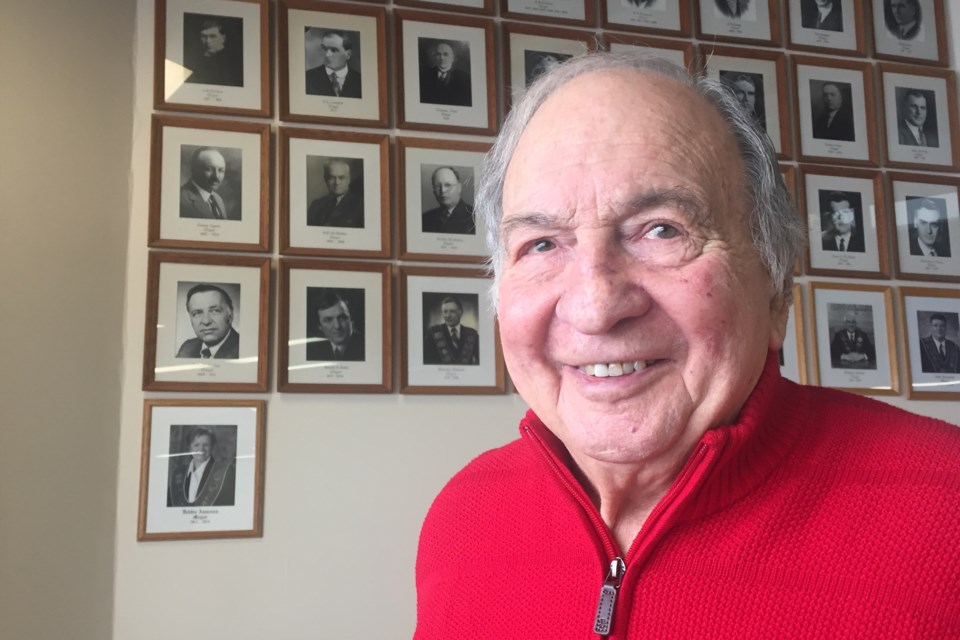 Ever since then, he's been a member of the committee of adjustment, an all-citizen group that makes highly technical decisions on minor deviations from the city's zoning bylaw and grants permission to alter or change lawful non-conforming uses of land, buildings or structures. It also decides on applications for changes to land configuration in the form of consents.

"You're looking very well, sir. I haven't seen you in some time. I congratulate you on your good health," said Joe Bisceglia, a venerable local lawyer who appeared before Gualazzi's committee Wednesday, seeking an easement across Mark Berlingieri's Northside Volkswagen dealership at 878 Great Northern Rd. to allow water, sanitary and storm sewer services to 854 Great Northern Rd. and 778 Great Northern Rd.

At the end of Wednesday's committee of adjustment meeting, members acclaimed the 91-year-old Gualazzi to a further two-year term as chair.

Known to friends and knowledgeable hockey fans as 'Sonny,' Gualazzi was inducted in 1993 into the Sault Ste. Marie Hockey Hall of Fame, recognizing his career with junior hockey teams in Galt, the Sault and Stratford, as well as time with Soo Indians.

He talked with SooToday after Wednesday's meeting about how he was recruited to the Ontario Hockey League from the Soo Indians.

"Fred Cox came here. He was a scout for Galt and he talked to Erzi Giuliani. We had a semi-pro team in Sault Michigan called the Soo Indians. It was part of the Soo Greyhounds and the Sault Indians. They wanted me to go there [Galt]."

"I was of the age to play Junior A. I went down and played for the Galt Red Wings. At that time, we were the affiliate for the Detroit Red Wings hockey team. At that time, here were only six teams in the OHL and Tim Horton was playing for St. Mike's. It was quite a league and quite an honour for me, from Sault Ste. Marie, to be able to play in the OHL with only six teams."

Brian led the OHL in scoring with 75 goals for Soo Greyhounds in the 1978-79 season.

"Brian was selected in the National Hockey League draft in 1979 by the Minnesota North Stars and played professionally in Salt Lake City, Utah before returning to law school," says his biography on the website of the Feifel Broadbent Gualazzi law firm.

"Although he had many achievements in hockey, he continues to be remembered for being the person responsible for Wayne Gretzky wearing the famous number 99. Brian was already wearing number 9 when Wayne arrived in the Soo; therefore, he was forced to wear a new number, and number 99 was created," the website states.

"Michelle is certainly the backbone of the committee of adjustment and has been over the years. We all rely on her and her help."