Margaret Cooper’s first encounters with the religion were were the liner notes of a Seals and Croft album and an ad a local newspaper that read ‘Baha'i faith’ and a phone number.

On Sunday, Cooper, along with other members, celebrated the 200th birthday of the religion’s founder, Baha'u'llah, at the Ermatinger Clergue National Historic Site.

Cooper was actually born into a protestant family in Thessalon and in her teenage years she became a Catholic.

“I guess I’ve always been kind of searching for a religion, a way of life that would speak to me,” she said over the phone.

In 1970, she recalls the Schmalenberger family had moved from Saskatchewan to Thunder Bay and after establishing a Baha'i community there, came to the Sault to do the same thing.

One of their newspaper ads stuck in her mind and when she saw a Baha'i event at Algoma University that screened a film about the religion featuring Seals and Croft, she decided to attend.

“It was a cold January evening and about 10 people showed up other than the Baha'i’s,” she said. “They talked about principals of faith and the founder of the faith. It was just interesting so I started going to regular once of week meetings at Schmalberger home. I had lots of questions… I had to be convinced.” 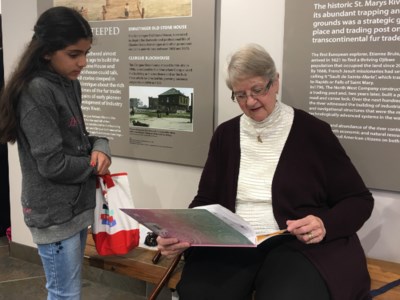 The longest-running Sault Baha'i follower, Margaret Cooper, looks at the writing of a young Ba'hai member at the Ermatinger Clergue National Historic Site on Sunday for a special 200th birthday celebration of the religion's founder, Baha'u'llah. Photo courtesy of George Alkhoury

Two particular Baha'i ideas resonated with her – the idea of ‘progressive revelation’, meaning that God doesn’t just give his message once but continually reveals it through prophets including Mohammed, Jesus, and Moses, and the idea that there is only one God and one human family.

The religion has a lot of unity and world peace, she said.

In October 1971, Cooper and her husband Anthony (who passed away in 2009) became followers of the faith.

Her description of the original 70s group, mixed with the pop/folk music connection, and a relatively unknown Easter religion makes the group sound sort of hippyish.

Cooper agrees, but says they weren't.

“It was a very lively community with a lot of young people in those days… The whole mood of life was different, (it was the) 70s, it was a kind of freer time,” she said. “Nowadays every thing is so serious, it’s just not as much fun… Now the world is so — there’s horrible things going on. When I watch the news, I call it the disaster channel.”

After morning prayers they would often go for a hike, they would have an annual baseball game on Mother’s Day, and they just had “more of a spirit of life and fun in general,” she said.

When the group started out there were maybe 30 people. There are fewer now, said Cooper.

People have come and gone from the Sault for work, and while there is a youth group, the average age is older as well, she said.

People in the community may be aware of the group as they are often in local parades and do community service projects like donating items to Pauline’s Place or the Soup Kitchen, or helping out at nursing homes.

The small group may still fall under some people’s radar.

“It’s always a surprise to find out that hardly anyone has been paying attention, on the other hand, some do,” said Cooper.

With notes from George Alkhoury