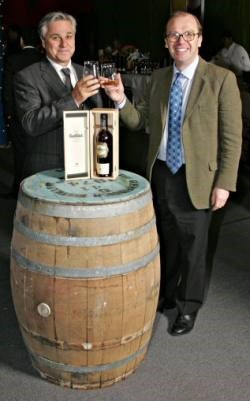 Willow Park's acquisition of the rare cask of 1975 Glenfiddich Single Malt Scotch Whisky marks only the second time a cask has been released in Canada.

Last year, Willow Park purchased a 1974 Glenfiddich cask, one of a very few casks from the Glenfiddich private reserve that have been sold worldwide.

Previous casks have been acquired for the launch of the Queen Elizabeth II, the Crown Prince of Denmark's wedding and Concord Airline's inaugural flight.

"Cask 84 has matured since 1975 in an oak cask in the traditional dunnage warehouse at The Glenfiddich Distillery in the Highlands of Scotland," Mr. Gordon said. "It has yielded 350 bottles at 49.1 percent alcohol by volume. The whisky has a rich complex aroma with oaky-fruitiness, hints of sherbet orange and subtle tannin and leather notes. The rich aroma delivers an equally rewarding taste with a beautifully silky mouth coating texture," explained Mr. Gordon.

The acquisition and sale of the 1975 Glenfiddich vintage cask has already attracted the attention of buyers from as far as South Africa because of its rarity and vintage.

Each bottle comes with the number of the cask hand printed on the label along with the signature of Master Blender, David Stewart.

Attractively packaged in a wooden box, bottles of this rare whisky are available for sale exclusively from Willow Park Wines & Spirits in Calgary for $600 a bottle.

William Grant & Sons Ltd. is an award-winning, independent, family-owned distillery established by William Grant in 1886 and is still controlled by fifth-generation family members.

The company distils some of the world's leading brands of Scotch whisky, including the world's favourite single malt Glenfiddich, the handcrafted range of The Balvenie single malts and a number of other premium spirits including Hendrick's Gin and the Icelandic vodka, Rekya.

For more information about Glenfiddich, go to: www.glenfiddich.com