Preliminary construction work could begin later this year on a $227 million demolition and reconstruction project at the Soo Locks. Stanley Jacek, area engineeer with the U.S. Army Corps of Engineers, told a meeting of the Sault Ste.
0
Mar 30, 2002 12:00 AM By: David Helwig 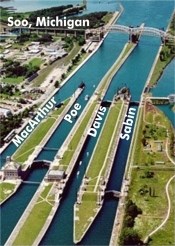 Preliminary construction work could begin later this year on a $227 million demolition and reconstruction project at the Soo Locks.

Stanley Jacek, area engineeer with the U.S. Army Corps of Engineers, told a meeting of the Sault Ste. Marie (Ontario) Transportation Committee on Thursday night that cofferdam construction on the Davis and Sabin locks could begin in 2002.

That would mean permanent closure later this year of the two locks, built in 1914 and 1919, Jacek told SooToday.com.

The two old locks will be demolished and replaced with one new lock capable of handling 1,000-foot vessels. To see a preliminary design for the new lock, click here.

A cofferdam -- a watertight enclosure from which water would be pumped to expose the river bottom -- is a necessary preliminary step, allowing demolition and construction to take place in a dry environment.

$3 million approved for preliminary work in 2002

The massive infrastructure project was originally approved by the U.S. Congress in 1986, but construction has been delayed by problems reaching a cost-sharing agreement with the Canadian Government and the half-dozen U.S. states expected to benefit from the project.

The Canadian Government has indicated it will not participate, Jacek said. User fees were initially considered but were prohibited under a U.S. statute passed in 1991.

However, the funding wrinkles are expected to be ironed out this year and $3 million has been allocated in 2002 for planning, design and construction preliminaries.

The cofferdam design work is scheduled for completion this year, and if sufficient funds remain, tenders will be called and construction could begin in 2002, Jacek said.

The U.S. Army Corps of Engineers has also received $3 million to dredge the approaches on the Upper (Vidal Shoals) and Lower (Little Rapids) St. Mary's River.

Thousand-foot vessels need 30 to 32 feet of water, but the current depth of the Davis and Sabin locks is 23 feet.

The dredging work started last year and is scheduled for completion in 2002, Jacek said. The exact alignment of the approaches is also being re-thought since September 11, he told the committee.

Why they want a new lock

The U.S. Government currently maintains four locks in the Sault. Here are the statistics:

Of the four U.S. locks, Davis and Sabin are the oldest and closest to Canada. Despite their 1,350-foot length, they're neither wide nor deep enough to accomodate thousand-footers.

As a result, Sabin has not been used at all in recent years and Davis is used only rarely. Seventy percent of the Soo's tonnage now goes through the much-larger Poe lock, Jacek said.

"If we have any problems, we have big trouble on the lakes," he told committee members.

All Great Lakes are expected to rise during the next month, he said.

A report provided by Jacek to Rowswell indicated that the Lake Superior outflow into Lake Huron through the St. Mary's River is predicted to be about four percent below the long-term average for March.

To receive free, real-time Email updates of SooToday.com's exclusive coverage of local news, just send an Email with "SUBSCRIBE" in the subject line to helwig@sootoday.com.