Chimney swifts are little birds that look, for all the world, like cigars with wings. They're listed as a threatened species in Canada. But you'd hardly know it here in Sault Ste. Marie. 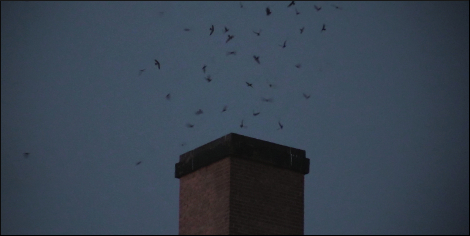 Chimney swifts are little birds that look, for all the world, like cigars with wings.

They're listed as a threatened species in Canada.

But you'd hardly know it here in Sault Ste. Marie.

This time of year, dozens, hundreds or even thousands of chimney swifts can be easily spotted downtown most any clear evening.

All these threatened birds roost in a single chimney on Queen Street.

That chimney (shown), on the roof of the main post office, is considered one of the top three places in Canada to view these sharp-winged birds with high-pitched chirps that ensure they're usually heard before they're seen.

The birds typically show up between 8:30 and 9 p.m., swarming above the post office before finally dropping into the chimney.

Most nights, a gaggle of birders and scientists is nearby, counting the birds and recording their curious chimney-stuffing behaviour.

Until now, the presence of the swifts has been little known outside a handful of hardcore local bird enthusiasts.

All that is about to change.

Next Sunday, May 24, the Sault Naturalists will host their first-ever Swift Night Festival.

"We'd like people to come out and witness the event in the evening," says organizer Valerie Walker.

Participants are asked to gather at 8 p.m. near the cenotaph on the front lawn of the Sault Ste. Marie Court House.

Members of the Sault Naturalists will be present to hand out literature and answer questions about chimney swifts.

The night before, observers counted 1,500 birds.

Other nights, as many as 2,000 swifts have been counted.

First seen at courthouse in 2005

Ralston had heard on the Internet about a program in Texas called Swifts Night Out.

He started listening for the unique song of chimney swifts here in the Sault.

"I started hearing some. Not many....I found 11 of them going into the courthouse building."

The following year, 2006, Ralston was seeing hundreds of swifts dropping into the courthouse chimney.

He kept observing the birds and between the fall of 2008 and the spring of 2009, he noticed something new.

Herring gulls were starting to attack the little birds.

They hung around the chimney and pulled swifts from the air.

Why the swifts crossed the road

In 2013, the courthouse chimney was capped and the swifts crossed Queen Street to the post office.

In 2014, Sault Naturalists persuaded the Ontario government to remove the chimney cap, but  the birds never returned there, preferring their new digs across the street.

Ralston's decade of observations and video of the Sault's swifts is now being studied by researchers interested in swift behaviour.

"I'll be looking at how many swifts are going into the roost each night over the last 10 years," says Jennifer Foote, assistant professor of biology at Algoma University.

Not  many birds are able to keep up with the jerky flight of the aptly-named swifts.

The Sault appears to be the first place in the world where herring gulls have been seen attacking them.

The gulls, Foote says, seem to use their wings to push the air, knocking the smaller birds off balance so they can be plucked from the air and carried off someplace where other gulls won't follow and try to steal them.

Swifts, in turn, are known to collectively use their own wings to create a booming, thunder-like noise when disturbed.

Why are swift populations declining?

The chimney swift population has been in steep decline over the past couple of decades.

This, Foote says, is true of most aerial insectivores - birds that pick insects out of the air.

"They've declined quite a bit in number, but there seems to be a healthy population using this chimney, though we aren't sure where they're actually nesting," Foote tells SooToday.

"These are migratory birds. They're on their way to their nesting grounds. They're using the chimney as a roost, temporarily, until it gets warm enough to go and breed individually in separate chimneys or trees."

"There's been a steep decline in insects since the use of DDT. Chimney swifts used to eat largely beetles, rather than small flies. Those declined drastically with the application of DDT to the environment. The swifts that survived are those that ate smaller insects. But they have less energy and take more to catch. So it's probably harder for the population to grow back to a healthy number."

"We're hoping it's going to run for two to three years. This is the first year."

"We're going to be using that data to look at how the population size has changed over time, whether the chimney swift population here is increasing or decreasing," Pearce tells SooToday.

"We'd really like Sault Ste. Marie residents to come down and have a look at their own species at risk right in their own backyard."

The following is excerpted with permission from a 2013 Environment Canada publication, The Chimney Swift: Coming to a Chimney Near You.

**************************
The Chimney Swift: Coming to a Chimney Near You
The summer skies over our cities and countryside would be less lively without the zany aerobatics and joyful chirping of these small, dark-coloured birds.
All can enjoy watching Chimney Swifts. The onlookers are treated to a real performance by the birds at dusk, when an entire flock will swoop and swirl for a while above a chimney before settling inside for the night.
The bad news is that the Chimney Swift’s population has plummeted in recent decades to the point where it is now designated as threatened in Canada.
The good news is that you can help.
What are Chimney Swifts?
The Chimney Swift nests in dark places, safe from predators and inclement weather. Before Europeans arrived in North America, the bird used to nest in large hollow trees and, sometimes, in rock crevasses.
For decades now, however, the Chimney Swift has usually built its nest in stone or brick chimneys, which is how it got its name.
Each spring, the Chimney Swift arrives in Canada between late April and early June to breed.
Chimneys are used initially as collective roosts.
Pairs then disperse to nest, with one pair per chimney, with their nest glued to the inner wall.
The nesting period lasts from mid-May to mid-August.
Both parents share responsibility for incubating the eggs and feeding the chicks.
Once the young are independent, the family can return to a collective roost during the night.
The Chimney Swift leaves for its wintering grounds in South America between early August and early October.
Ravenous appetite and boundless energy
The Chimney Swift is an insectivorous bird with an insatiable appetite and tireless energy.
Have you ever seen one perched?
Surely not, because it spends its days on the wing catching insects.
A single Chimney Swift can consume over a thousand insects a day without ever coming to rest.
Besides, even if it wanted to perch, it could not.
As its family name - Apodidae, or feetless - suggests, the Chimney Swift has very short feet that prevent it from walking or perching horizontally like other birds.
It can only perch vertically.
Easy to recognize

The Chimney Swift makes its presence known in the skies: the high-pitched chirping of its incessant chatter is all the louder because the bird rarely flies alone.

Its long, narrow, pointed and curved wings make it look like a little boomerang -  a boomerang, however, without any sense of direction, as it zooms and zigzags at top speed, constantly changing its direction.

Unlike swallows, for which they are sometimes mistaken, Chimney Swifts can be distinguished by their streamlined body and very short, non-forked tail.

The Chimney Swift, which was once very common in populated regions of Quebec, is now in serious trouble.

This is why the bird is now legally protected as a threatened species.

Chimneys that swifts can actually use are increasingly rare.

Many traditional chimneys have been destroyed or are equipped with a cap that blocks access, and fewer new chimneys are constructed because of electric heating.

In addition, the interior diameter of most of these chimneys is now too small (under 30 cm), and the interior wall is made of metal, so the bird cannot use it for roosting or nest building.

Should this species return to hollow trees to compensate for the loss of suitable chimneys?

Some individuals may, perhaps.

The problem is that deforestation over the last two centuries has significantly reduced the number of suitably large trees.

Lastly, in addition to habitat loss, the insect populations that provide food for the Chimney Swift have also changed.

Insecticides are considered the main cause.

"I bought this property to turn it into an inn. I had to do a lot of renovations, especially to the chimney, but when I learned that a bird species that is threatened in Canada was nesting there, I changed my plans to protect the swift pair. Today, I’m happy to know that these birds are still nesting in my chimney. Better yet, observing the birds is now an activity I offer to customers at my inn." - John Graham, owner of La Vieille École, a bed and breakfast in Grandes-Piles in Mauricie, Quebec.

A Chimney Swift nest will not damage your chimney and is not known to cause fires or pose health risks.

The Species at Risk Act protects Chimney Swifts by prohibiting people from killing, harming, harassing, capturing or taking the birds.

The Chimney Swift is also protected by the Government of Canada’s Migratory Birds Convention Act, 1994 and the Migratory Birds Regulations, which prohibit the harassment or killing of juvenile or adult migratory birds, as well as the destruction or disturbance of their nests or eggs.

If your residence can accommodate swifts, you can help the species recover.

Learn more about the species by visiting the Species at Risk Public Registry at www.sararegistry.gc.ca

Keep the opening to your chimney free of any obstructions.

Grills and caps should be avoided.

If your chimney has previously been used by swifts, keep it, even if it is no longer used for heating.

Consider the possibility of keeping trees on your property that could meet the swift’s needs, particularly if the tree trunks are hollow, which is often the case for trees with their tops cut off.

Reduce your insecticide use to a minimum.

To get help or advice, or to become involved in protecting the species, contact conservation organizations in your region.

During the nesting period, which runs from mid-May to mid-August, do not have your chimney cleaned.