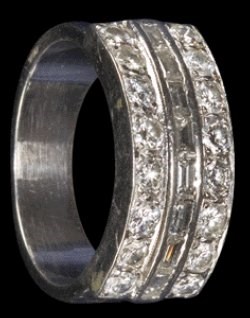 BEVERLY HILLS, Calif. - Elvis Presley's diamond-and-platinum wedding band from his marriage to Priscilla will be among over $2 million worth of exclusive TV and movie memorabilia to be auctioned on Thursday, December 14 and Friday, December 15 by Joseph Maddalena and his
internationally-renowned Profiles In History, the number one company in the world for live and simultaneous Internet memorabilia auctions.

The general public can view the Elvis ring in the location where the notable marriage took place during a special exhibit, beginning Thursday, November 16, at The Aladdin/Planet Hollywood Resort and Casino in Las Vegas.

"The marriage of Elvis and Priscilla Presley was the most significant wedding in the 20th century. There was Charles & Diana and, of course, Paul & Heather. But there was only one Elvis Presley. This is the opportunity of a lifetime to view this ring in the very place Elvis was married. The fact this ring then comes to public auction is just beyond words. This is truly a once-in-a-lifetime opportunity to own a true piece of pop culture history." - Joseph Maddalena

Elvis Presley's wedding band is decorated with eight baguette-cut diamonds within a border of sixteen fill-cut diamonds, and has an expected sale price of $100,000 - $150,000.

Elvis unveiled the ring at The Aladdin Hotel in Las Vegas on Monday, May 1, 1967, the day he wed Priscilla in a ceremony that celebrated one of the most famous marriages of the 20th century.

In addition to the Elvis ring, featured items from Profiles In History's upcoming Hollywood memorabilia auction will be on display at The Aladdin/Planet Hollywood Resort and Casino.

About Profiles In History

Profiles In History is the nation's leading dealer of original historical letters and manuscripts.

Collectors and history buffs alike will be captivated by Profiles In History's outstanding array of historical letters in every field: American Presidents and statesmen; Revolutionary and Civil War soldiers; scientists and inventors; celebrated authors, artists and composers; aviators and explorers; sports heroes and Hollywood legends; as well as many others who have left an indelible mark on history.

In 1995, Profiles In History expanded into the world of entertainment memorabilia auctions.

Now, over 25 auctions later, it has become the preeminent auction house specializing in Hollywood memorabilia including props, costumes, artist's sketches, posters and autographs from film, television and rock n' roll.

All items to be auctioned are available for review in a full-color catalog obtainable through Profiles In History's Beverly Hills' office, or by visiting the company's website at ProfilesInHistory.com

About The Aladdin/Planet Hollywood Resort and Casino

The property continues to operate as the Aladdin Resort & Casino during the extensive renovation process.

Upon completion of renovations, the property will be
re-branded and renamed the Planet Hollywood Resort & Casino, a Sheraton hotel.

The Aladdin is also home of award-winning Elemis Spa and the Aladdin Wedding Chapel.

The Aladdin is a member of Starwood Preferred Guest program.