What Am I Doing This Weekend? Belsito at the Downbeat

At the risk of being entirely self-serving (or incredibly opportunistic), I am letting sootoday.com readers know what I am doing this weekend.
0
Sep 17, 2004 8:48 AM By: Chris Belsito 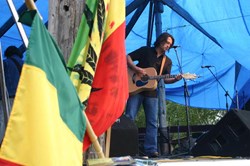 At the risk of being entirely self-serving (or incredibly opportunistic), I am letting sootoday.com readers know what I am doing this weekend. What do people expect when they ask an artist to volunteer to maintain content on a local media source's arts page? To create some illusion of seperation, I will write about 'me' in third person.

This weekend, September 17th and 18th, local recording artist Chris Belsito (www.chrisbelsito.com) and his band will be taking the stage at the Downbeat Lounge on Queen Street. Belsito, a local singer songwriter with three albums under his belt and a fourth soon to be released, is one of the few acts in Sault Ste. Marie to play three sets of almost entirely original material.

With approximately 600 or so songs under his belt, Belsito has been solicited in the past to submit songs for artists like Anne Murray and Celine Dion. His material has also proven to be a cost-effective means for independent film directors to incorporate original music into their movie soundtracks.

Belsito's most recent cd, Turbulence, is available at The Rad Zone in the Wellington Square Mall, CDPlus in the Cambrian Mall, and number of other fine locals retailers who have offered to support local music.

PS If you want to read less about Belsito, send in your arts news to arts@sootoday.com.