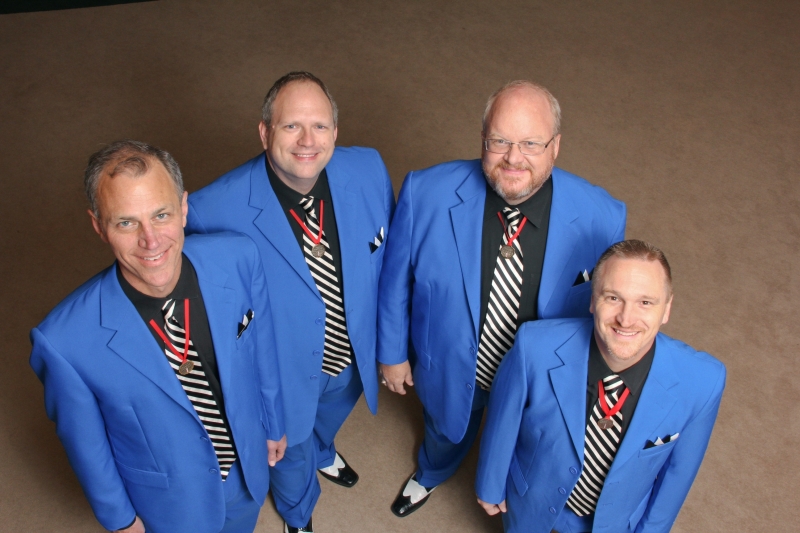 The Northland Barbershop Chorus of the Sault, Ontario Chapter of the Barbershop Harmony Society is proud to announce its 51st Annual Show will be presented Saturday, April 11, starting at 7:30 p.m. at the Kiwanis Community Theatre Centre.

Background: Vinyl Records Among the favourite kinds of songs sung by the Northland Chorus are those of the late 50’s and early 60’s.

Not only are songs from this era particularly fun to sing, they seem to connect in a personal way with our audiences - even those whose members include people too young to remember vinyl records.

Thanks to YouTube and iTunes, music from just about any era is now readily accessible to people of all ages.

The songs being featured on tonight’s show were first popular during the height of the vinyl recording era, the decade from 1957-1967, long before the more modern formats of 8-track tapes, cassettes, compact discs and mp3 digital files were ever dreamt of.

Even with their tendency to warp, get scratched and skip, and produce all manner of extraneous clicks and pops, many audiophiles nevertheless consider the sound produced on vinyl records to be superior to any other.

As a result, vinyl is making a comeback, with many bands today releasing their latest efforts on it.

Good turntables are once again in demand.

Show details: The 40+ man chorus will present songs in traditional four-part barbershop harmony within an original one-act play written by chorus director Bob Shami. Inspiration and ideas were contributed by our friends Harry Houston and Sue Barber, as well as by chorus member Ted McKinney.

The setting is the home of “Rhonda” (Terri Miller) and “Ritchie” (Chas Calam), a couple of high-school sweethearts who married in 1967.

In that time, Ritchie has turned into something of a lovable but grumpy curmudgeon.

With a disposition that might remind you of Clint Eastwood in “Gran Torino”, Ritchie pines for the good old days, to the dismay of his loving but sometimes exasperated wife.

Through the magic of radio and the power of great songs made famous by Buddy Holly, Everly Brothers, Beatles, Beach Boys, Temptations and more, Ritchie is transported back to 1964 when he and Rhonda first met, to discover, like Scrooge, the things that are really important in life.

His spirit guide to the 50’s/60’s is radio DJ “Mel Knight”, (Chorus member and real-life DJ Mark San Angelo) as host of “The Night Shift” on radio station K-O-R-D.

As always, a major portion of the proceeds will go to support local speech therapy programs at the Speech-Language Pathology Unit of the Sault Area Hospital.

More than $75,000 has been donated by the Northland Chorus to this cause since 1995 in keeping with their motto: “We Sing … That They Shall Speak.”

Barbershop singing had its beginnings in American barbershops of the 1890’s through 1920’s.

Barbershops served as “tonsorial parlours”: places where men gathered to share news, camaraderie and a song or two.

The City of Sault Ste Marie awarded the Northland Barbershop Chorus the 2010 Medal of Merit, the city’s most prestigious honour, in recognition of community service given over five decades.

The award is given to nominees for “outstanding achievement in a chosen area which has resulted in making a valuable contribution to the community”.

The award was officially presented to all then currently active chorus members by Mayor Debbie Amoroso at a civic ceremony and dinner held May 7, 2011.