Album recorded during summer of 2018; includes more than 40 musicians, performing in Anishinaabemowin, French and English
Dec 3, 2020 9:00 PM By: SooToday Staff 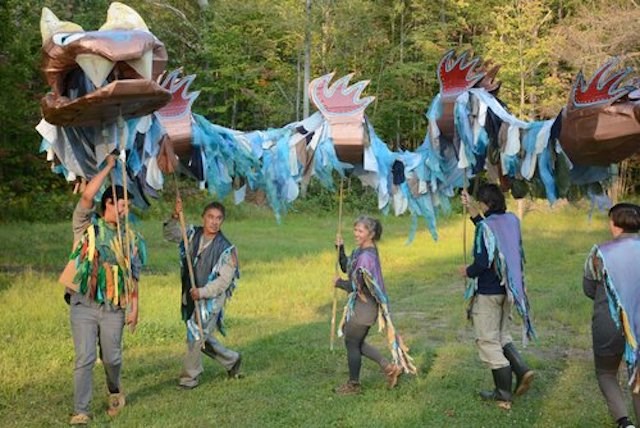 Thinking Rock Community Arts has announced the release of its first full-length album featuring the score from an original play performed over eight days in September 2017.

Gigidoowag Ziibik/The Rivers Speak: Music From A Community Play was recorded during the summer of 2018, and includes more than 40 musicians, performing in Anishinaabemowin, French and English.

“When you hear the full cast’s voices join in with Grandmother Marly Day at the end of the Strawberry Song, it brings tears to your eyes," said Robin Sutherland, founder and strategic director of Thinking Rock Community Arts in the release. "To me, this is what respectful relations can sound like.”

The album can be streamed online here. Hard copies of the album are available for purchase here.

THESSALON -  The rivers have always spoken. It is time for us to listen. Thinking Rock’s inaugural album 'Gigidoowag Ziibik/The Rivers Speak: Music From A Community Play' – which was officially released Dec. 1, 2020 – is a stunning recreation of the evocative, haunting, experimental, and dance-worthy music that enchanted local and visiting audiences of the community play that was performed over eight days at the Mississauga First Nation Pow Wow grounds in September 2017.

Recorded mostly outdoors at the Mississauga First Nation Powwow Grounds and the AlgomaTrad Centre in the Central Algoma region of Northern Ontario, this original score was performed in Anishinaabemowin, French and English by the original cast of the play over the summer of 2018. Over 40 professional musicians, Anishinaabe singers and hand drummers, and community participants of Settler, Indigenous and Francophone descent aged four to 84 contributed to the making of this album. The play itself was developed over five years and involved over 4,000 community participants of all ages from rural and First Nation communities across Central Algoma.

“When you hear the full cast’s voices join in with Grandmother Marly Day at the end of the 'Strawberry Song', it brings tears to your eyes. To me, this is what respectful relations can sound like,” says Robin Sutherland, founder and strategic director of Thinking Rock Community Arts and artistic director of the play.

“This beautiful album is an important way for us to share all of the teachings, love, creativity and new friendships that went into and came out of the play,” says Grandmother Marly Day.

In recognition of the tracks that feature traditional Anishinaabe songs, one third of all album proceeds will go to the Kii-Ga-Do-Waak (Grandmother Council), whose vision is to “recognize the human dignity and promote the well being of all trafficked persons.” All other proceeds will directly support Thinking Rock’s free community-engaged arts programming throughout Central Algoma in Northern Ontario (currently taking place online).

The album can be purchased and streamed online everywhere music is available as of Dec. 1, 2020 by visiting here. Hard copies of the CD can be ordered online.

More information about the album and the play – including a full length filmed version – can be found here.

This album was created with partnership support from Mississauga First Nation, AlgomaTrad and Jumblies Theatre and was made possible by financial contributions from the Ontario Arts Council, the United Way of Sault Ste. Marie and Algoma District, NORDIK Institute, and individual donors.