"It's rock and roll with bagpipes ... what more do you want?" says Jon Ferguson of Foggy Notions about The Mudmen . Is that not enough? How about a bit of punk then? The Mudmen have that too.
Sep 7, 2006 1:15 AM By: Donna Hopper 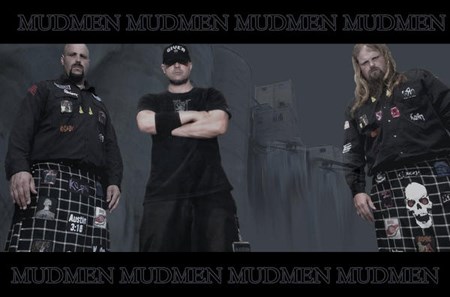 "It's rock and roll with bagpipes ... what more do you want?" says Jon Ferguson of Foggy Notions about The Mudmen.

Is that not enough?

How about a bit of punk then?

The Mudmen have that too.

Don't worry, they have all the normal musical stuff that other bands have.

But what sets The Mudmen apart from the crowd are the "Bagpipe Brothers," Rob and Sandy Campbell.

These two strapping lads have been piping for most of their lives and have travelled to Scotland as participants in the World Bagpipe Championships an impressive five times.

It wasn't until 2000 that the band took shape when the duo teamed up with singer Zoy Nicoles and their unique celtic/rock/punk sound was delivered to the masses.

With three albums to date, they have been touring North America steadily, sharing the stage with the likes of Sloan, The Salads, Treble Charger and Spirit of the West.

Their second album, Overrated was so successful, it earned them a national tour with Bif Naked as well as numerous festival dates, including Edgefest.

It also resulted in three of their videos being added to regular rotation on MuchMusic and MuchLoud.

"We love to tour, tour, tour. Connecting with fans is very important to us and performing is the best way for us to do that," says Nicoles.

Well, you will have the opportunity to see their "not for the timid" show at Foggy Notions on Friday September 8 and Saturday September 9 as The Mudmen make their second appearance in Sault Ste. Marie.

As their website states: "The band's powerfully intense live show has leveled audiences throughout North America ... with its fusion of melody and relentless rock/punk power."

If you go, remember to take a moment to chat with the fellas from the band.

If you're shy, here's a topic for you - wrestling.

Rumour has it they may enjoy the subject.