Major portion of the proceeds raised from the 56th annual show will go towards local Speech Therapy services
0
Mar 9, 2020 9:18 PM By: SooToday Staff 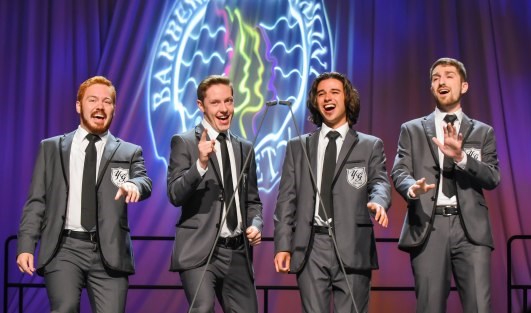 NEWS RELEASE
THE NORTHLAND BARBERSHOP
*************************
The Northland Barbershop Chorus of the Sault, Ontario Chapter of the Barbershop Harmony Society will present its 56th annual show on Saturday, April 4, 2020 starting at 7:30 p.m. at the Sault Community Theatre Centre. More show info can be found here.

This show takes its inspiration from a recent series of performances by local auctioneer Vernon Bailey. Vern’s shows combined his expert recitations of poetry written by Canadian rural poet, Charlie Smith of Massey, Ont., with music that related to the poem’s themes. The Northland Chorus has taken this premise and expanded the show to include an original play written by chorus director Bob Shami with assistance from Soo Theatre Workshop president Harry Houston. Stage direction will be handled by Jeannine Jefferson.

The show is set on the family farm of Floyd Gibson (Vernon Bailey), who took over the farm upon the retirement of his father, Grampa Gibson (Bob Tisdall). Every Saturday night, Floyd and Grampa get together over coffee at the farmhouse to regale each other with their latest poetic efforts. They hope Floyd’s son Brandon (Matthew Doherty) will eventually take over the farm and continue the family tradition of farming and creating poems that reflect their way of life but young Brandon has other ideas.

There are 11 poems included in this show, nine of which were written by Canadian rural poet, Charlie Smith. (Charlie has indicated he hopes to attend the show). One epic poem by Robert W. Service is also featured. The play will run as the show’s first act and will include 10 songs performed a cappella in four-part harmony by the Northland Barbershop Chorus. Our shows always feature a wide variety of music from across the musical spectrum.

Barbershop is not an era, rather it is a style of singing any kind of music from pretty much any era – so long as it’s got the potential for four-part harmony. Songs in this show include: a song from the musical Porgy and Bess (George Gershwin’s Summertime - 1935), and songs from Elvis (Can't Help Falling in Love - 1961), Eddie Cochrane (Summertime Blues  - 1958), Bobby Vinton (Blue Velvet - 1951), Ian and Sylvia Tyson (Four Strong Winds - 1961), Mommas and Papas (California Dreamin' - 1965) and more.

The show’s second act will feature a performance by a dynamic young quartet from Toronto: Yonge Guns.

A major portion of the show proceeds go to the Speech-Language Pathology Unit at Sault Area Hospital in support of local speech therapy programs. In 2019, the Northland Chorus reached a major milestone, with more than $100,000 donated to this cause since 1995. Several thousand more has been donated to the Speech Deptartment at War Memorial Hospital in Sault, Mich. Their support of local Speech Therapy Services is in keeping with their motto: “We Sing … That They Shall Speak.”

Revenue derived from the annual show is their only source for donations to the Hospitals.

Tickets may also be available at the door.

More information about the long history of support of the local Speech Therapy services by the Northland Chorus can be viewed on their website.

Downtown Alphabet Sault-p: How many can you identify?
Mar 22, 2020 6:30 PM
Comments
We welcome your feedback and encourage you to share your thoughts on this story. We ask that you be respectful of others and their points of view, refrain from personal attacks and stay on topic. To learn about our commenting policies and how we moderate, please read our Community Guidelines.