New movie production sets up shop in the Sault 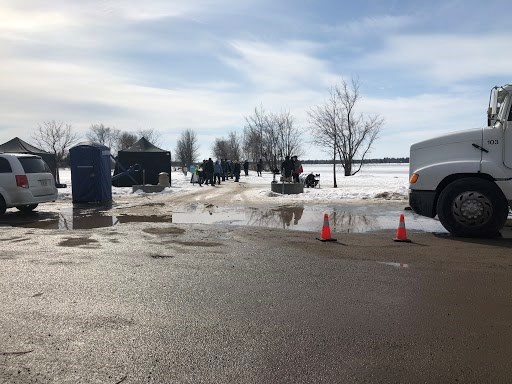 Topsail Island was the scene on Tuesday as production of the film The Protector was taking place.Meghan Pounder

If you took a walk through Bellevue Park on Tuesday, you may have noticed the barrage of film equipment and crew that took over Topsail Island for part of the day.

The Protector showcases the life and struggles of Evelyn after her move to a small town following a release from a correctional facility.

During her struggle, Evelyn searches for meaning that is interrupted by the arrival of a mysterious book about a powerful God who brings peace wherever he goes.

As her mind becomes blurred between the stories and reality, Evelyn begins to believe that God is among them only to realize that peace comes with a price.

"The Protector team did provide their own COVID-19 Plan in addition to Section 21 Guidelines, which included having a COVID-19 Coordinator and COVID Compliance and cleaning crews. In addition, I was able to connect The Protector producers with a Panbio Antigen Screening Program implemented by the Province of Ontario Ministry of Health. They were accepted into this program and cast and crew are being tested three times a week. In addition to regular health monitoring," City Film, Television and Digital Media Coordinator Jennifer Mathewson told SooToday in an email.

"The Protector team is committed to hiring local, to limit the number of people brought into the community. This includes paid on job training for recent graduates and students of the Digital Film Production Program offered through Sault College. We are happy to see that our local crew base is returning to work. This pandemic has effected not only their lives but has had a significant impact on our local hotels, restaurants, and other support businesses that provide goods and services to the film industry. This will be a much needed boost to our local economy."