Presented by Tidal Records and the City of Sault Ste. Marie, Go Skate Day 2015 saw dozens of skaters of all ages and skill levels participate in a variety of skate events Sunday afternoon.
Jun 22, 2015 4:43 PM By: Donna Hopper
Previous Next
1 / 1 Skaters of all ages and skill levels came out for Go Skate Day presented by Tidal Records on Sunday, June 21, 2015. Donna Hopper/SooToday
Expand
Previous Next 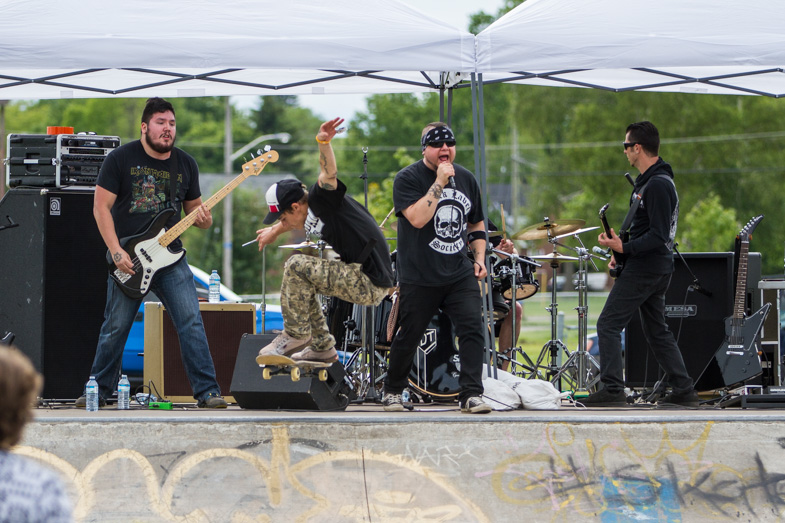 Presented by Tidal Records and the City of Sault Ste. Marie, Go Skate Day 2015 saw dozens of skaters of all ages and skill levels participate in a variety of skate events Sunday afternoon.

While an impressive amount of skill was demonstrated throughout the day, skaters of note included:

•    Jim Huckson, a member of the newly formed Tidal Records Skate Team, successfully ollied over 19 skateboards and landed a switch 360 flip down the stairs.
•    Christian Shawana landed a backside 180 double heelflip on the big bank, and a massive heelflip on the bump followed by a double heelflip.
•    Mike Bell landed a laser flip down the set and a kickflip backside lipslide down the rail.
•    Ty Cobb landed a number of tricks, including a frontside 360 boneless on the stairs and the bump.

Jewett, a graphic designer, creates custom boards from Canadian maple adorned with original graphics in partnership with other local artists.

Bell lends a hand to the local skate community by making a variety of affordable boards readily available to local skaters.

Live entertainment on the Great Lakes Honda stage was provided by DJ Seith, Conika, Caroline Divine, The Pixo Control and Garden of Bedlam.

"We're just trying to get everybody involved in the whole lifestyle of art and skateboarding and everything else Northern Ontario has to offer," Dustin Jones of Tidal Records told SooToday.

Originally conceived by the International Association of Skateboard Companies in 2004, Go Skate Day is an international day of recognition marked annually on June 21.

Sunday's Go Skate Day celebration at the skate park is the second time such an event was hosted locally.

To keep up with the Tidal Records Skate Team, visit their Facebook page