Got the Fall Doldrums? Limblifter to the Rescue

Canadian alt-rock icons, Limblifter, will be rocking the Canadian this coming Friday, October 22nd. Limblifter started out as a side project. Ryan Dahle of Age of Electric realized he had far too much material for one-band alone.
Oct 18, 2004 9:07 AM By: Chris Belsito 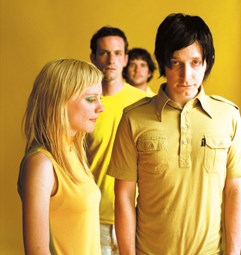 Limblifter started out as a side project. Ryan Dahle of Age of Electric realized he had far too much material for one-band alone.

So, the songwriter/guitarist, who single-handedly penned the Age of Electric hits "Remote Control" and "Ugly" (which elevated AOE to gold-selling status), decided to strike up another band with his brother Kurt Dahle on drums.

With the release of their debut CD in 1996, Limblifter found themselves signed to record label in the United States, opening for Oasis, nominated for two Juno Awards and one Casby award, and charting with three number top twenty hits, "Tinfoil", "Vicious" and "Screwed it Up."

The side project had all but eclipsed the "day" band. As fate would have it, Age of Electric would only release one more record, "Make A Pest A Pet," before disbanding in 1998.

Limblifter went back into action releasing "Bellaclava," which spawned the college rock hits "Ariel vs Lotus" and "Wake Up to the Sun."

By 2001, brother Kurt Dahle left Limblifter to form the successful Vancouver-based, The New Pornographers. Ryan continued on and released "I/O", a record that has been hailed by critics as a "pop-rock gem." Limblifter has seemingly mastered the art of straddling "the middle ground between innovative art-pop and rock-radio."

Joined by a league of Canadian musicians such as legendary drummer Pat Steward (Bryan Adams, the Odds), and rare vocal appearances by Matthew Good, Jordy Birch and Age of Electric's Todd Kerns, "I/O" also distinctly features the signature guitar playing that has made Dahle a Canadian icon.

Limblifter with be performing with local opening act this Friday. Show begins at 10 pm and is ages 19+. there is a $5 cover at the door.