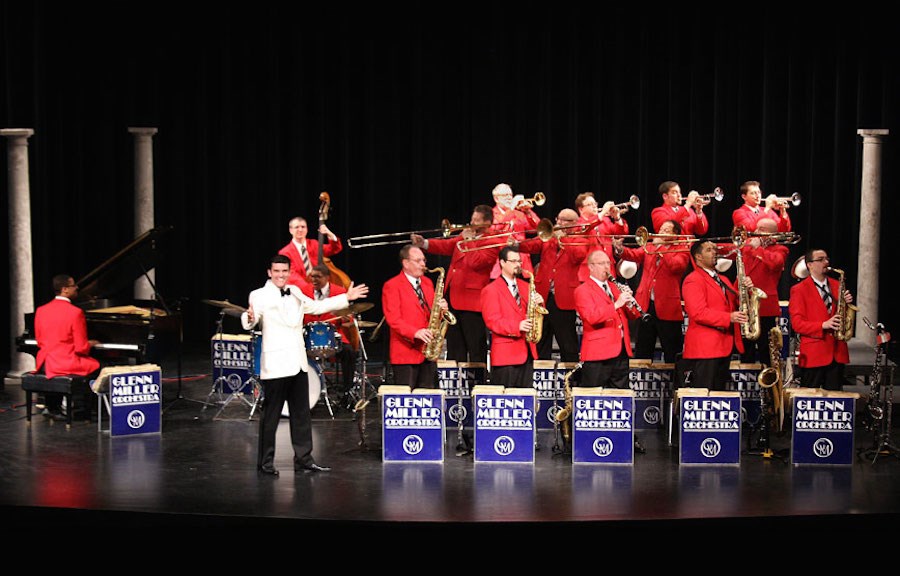 Arts Center director, Spencer Christensen, says, “We know the twin Saults love GMO, and so do we! The music embodies so much of what our audience appreciates - it’s patriotic, energetic, and upbeat - a real summertime feel. And in honour of the legacy of Glenn Miller and to honour all those who have served, we are offering a special ticket price, $10 per ticket, to all those currently serving members and Veterans of our armed forces. These tickets need to be purchased in person at the Arts Center box office with ID.”

The Glenn Miller Orchestra began in 1938 with dance bandleader, Glenn Miller. For the next four years the orchestra enjoyed soaring popularity, playing in concert and dance halls all over the United States. In 1942, the orchestra disbanded to join the war effort. Glenn Miller joined the Army, and in turn led the Army Air Force Band that helped entertain our servicemen all our Europe.

The current Glenn Miller Orchestra has been touring since 1956 and is consistently performing up to 300 shows all around the world! Today, the 18-member ensemble, led by vocalist Nick Hilscher, continues to play many of the original Miller arrangements, from both the civilian band and the Army Air Force Band libraries. Additionally, it also plays some more modern selections arranged and performed in the Miller style and sound.

A recent concert-goer from North Carolina wrote, “Attended the concert at Cary Arts Center in Cary, NC last night along with my 14-year-old grandson, Scotty, who is also a dedicated GMO fan. Their performance was high energy, and super professional. The repertoire was perfect and the solos of Nick, Julie, and the Moonlight Serenaders was just icing on a delicious musical cake! What a fantastic way to spend a couple of hours on a Friday evening… If the GMO is coming to a city near you... DON’T MISS IT!”

The production was made possible with the generous support from the Michigan Council for Arts and Cultural Affairs, Fund for LSSU, and the Duncan MacLaren Family Fund for the Performing Arts.

The Glenn Miller Orchestra takes the Arts Center Stage at 7 p.m. July 23. Free parking is available in Lot K in front of the Arts Center, and Lot E behind the Cisler Center. The Arts Center is wheelchair accessible. Admission is free for LSSU students, $27 for adults, $23 for seniors, $10 for active duty military members and Veterans with ID, and $5 for children 17 and under. For directions, tickets, and more information please visit here or call (906) 635-2787.

Lake Superior State University is Michigan's most affordable public university with one rate in-state tuition for all. Surrounded by three Great Lakes, LSSU is an unsurpassed location for research, focusing on real-world experiences. Well known for programs such as fisheries and wildlife management, engineering, nursing, criminal justice, and fire science; Lake State is also leading the way with innovative new programs, including cannabis chemistry and cannabis business.

Superior Heights OnStage presents 'Willy Wonka and the Chocolate Factory'
Feb 18, 2020 9:00 PM
Comments
We welcome your feedback and encourage you to share your thoughts on this story. We ask that you be respectful of others and their points of view, refrain from personal attacks and stay on topic. To learn about our commenting policies and how we moderate, please read our Community Guidelines.