Throughout September, the Downbeat Lounge will be presenting a combination of local and out-of-town original acts for all tastes. Next weekend, September 10th and 11th, local favourites Startlefish ( www.startlefish.
Sep 8, 2004 8:36 AM By: Chris Belsito 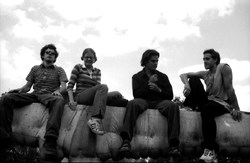 Throughout September, the Downbeat Lounge will be presenting a combination of local and out-of-town original acts for all tastes.

Next weekend, September 10th and 11th, local favourites Startlefish (www.startlefish.com) will be presenting their brand of rock and roll, featuring songs from their forthcoming CD as well as classics by artists like The Waterboys and Lou Reed.

On September 17th and 18th, local recording artist Chris Belsito (www.chrisbelsito.com) and his band will take the stage. Belsito has recorded a number of CDs and has performed and shared the stage with some of the country's biggest acts.

On Friday, Sept 24th, Ottawa-based rock and roll band The Smacks (www.thesmacks.com) are coming through town. The Smacks are currently promoting their first release Don't Move, an exciting collection of original songs ranging from garage rock to jazz and groovy rhythm and blues, including a Gypsy inspired ode to decadence. Think three young punks doing blue-eyed soul, drenched in swirling Hammond organ, spiked with razor-sharp barkin' blues guitar and old-school thumpin' drums. Not to mention, these cats can really sing!

Then the following night, September 25th, Jacob Two Two (www.jacobtwotwo.net), a pop-rock band with a jazzy side and a song about dandelions has been making waves nationally, first for receiving a blessing from the late Mordecai Richler to use the name of his character Jacob Two-Two, and then for their music - garnering radio play on campus and community stations and national press attention, as well as praise from Canadian musical heroes like Garnet Rogers and Willie P. Bennett.

Finally, the month will close out with Blue Quarter (www.bluequarter.com) on Thursday, September 30th. Blue Quarter is a cohesive three pieces musical entity that delivers an original Techno-Jazz groove. Given the diversified musical backgrounds of these three individuals, the band never ceases to explore the grounds of sounds.