George Ravlich is the freakishly tall brains behind Sault Ste. Marie's own Crank Sound Distribution. Dave Rat is the brains behind Rat Sound Systems Inc. and the guy who has made the Red Hot Chili Peppers sound so good for the last 16 years.
Nov 29, 2006 1:25 PM By: Donna Hopper 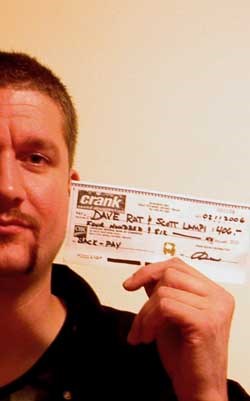 Dave Rat is the brains behind Rat Sound Systems Inc. and the guy who has made the Red Hot Chili Peppers sound so good for the last 16 years.

While reading a professional sound magazine in 2000, Ravlich came across an article about Rat and his sound company, thus inspiring him to start his own sound company.

The rest is Sault history.

Rat's modest beginnings hanging out with punk bands in the late 70's has lead to an illustrious career working with not only the Chili Peppers, but also Blink 182, Offspring, Fugazi, Sonic Youth and Pearl Jam.

At the September 16, 2006 Red Hot Chili Peppers' show in Calgary, Ravlich had the honour of finally meeting and hanging out with Rat for the entire concert.

One fateful day back in October, Ravlich was reading Rat's blog, Roadies in the Midst and became intrigued by something he found.

"Without question our unanimous vote of two resulted in addressing our most pressing trauma: 'How are we going to finance the redecoration of the FOH mix world?' Rat wrote.

"Hmmmm, primarily we will need cash, and lots of it, I figure fives and fives of dollars at least. Acquiring that kind of bankroll will be a challenge indeed.

"Shall we panhandle? Pick pockets? Sell our bodies? There must be a way we can easily and quickly generate the finances for this endeavor.

"Aha! Sell our bodies, perfect! And it was then we committed to do what any entrepreneurial 21st century roadie would do in this situation..."

"Aghast we were soon to realize that there was a serious flaw to our plan and after several minutes with no bites we began to rethink our strategy, yes people were seeing our ad for ad space, but no takers. Argh! And that is when it dawned us, we need a bigger audience, we need go public, we need to, yes that is correct, go to Ebay."

Sure enough, Ravlich followed the link to the E-Bay auction that was indeed selling ad space on the backs of their shirts during a Chili Peppers' concert of the winning bidder's choice.

"I'm the proud owner of your backside for an evening," said Ravlich in an e-mail to Rat who had no idea who the winning bidder was until then.

Ravlich has not yet decided during which show his ad will appear, but rumour has it the t-shirts are printed and will be awaiting Rat's return to California following the Chili Peppers' current European tour.