"Are you ready to party or what?" No, this isn't a quote stolen from Wayne's World. This rock and roll cliche is the first line of the Planet Smashers' new bio.
Oct 13, 2004 9:02 AM By: Chris Belsito 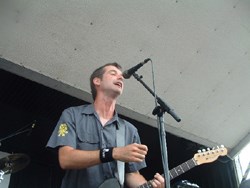 "Are you ready to party or what?" No, this isn't a quote stolen from Wayne's World. This rock and roll cliche is the first line of the Planet Smashers' new bio. With one line, this critically lauded band has sent up the flag that something about them is quite different.

With their fifth and latest release, "Mighty," the Planet Smashers have moved past "dark and critical themes" of their last release, "No Self Control," into the territory of "fun and positive." For longtime fans of the band, this new outlook might be a bit worrisome. For those looking for good-time ska, it is a call to arms. What did you expect from the new CD? It was produced by the same fellow (Rod Shearer) who souped up Corey Hart. Isn't that a scary thought.

Formed in 1994 in Montreal, the Smashers’s have become known for their infectious pop melodies, killer horn licks and high-voltage live shows. In some circles, they have even earned the name of "Kings of Ska."

The band has been headlining shows across North America for many years, been on three European tours, included on three Vans Warped Tours, as well as one tour of Japan (where they are hugely successful). The band members are likely believers in the ol' rock and roll defense mechanism (and Tom Wait lyric): "Hey buddy, we're big in Japan."

Catch the Planet Smashers (with Far From Heroes and Renderware) live on their "Ska is Dead...and You’re Next Tour" at the Canadian Night Club on Tuesday, October 19th. Doors open at 7:30 pm. Show begins at 8:00 pm. This is a licensed, all ages show. Tickets are $10 at the door.

For more information on the Planet Smashers, visit www.planetsmashers.net.