A double dose of A Tribe Called Red (26 photos) 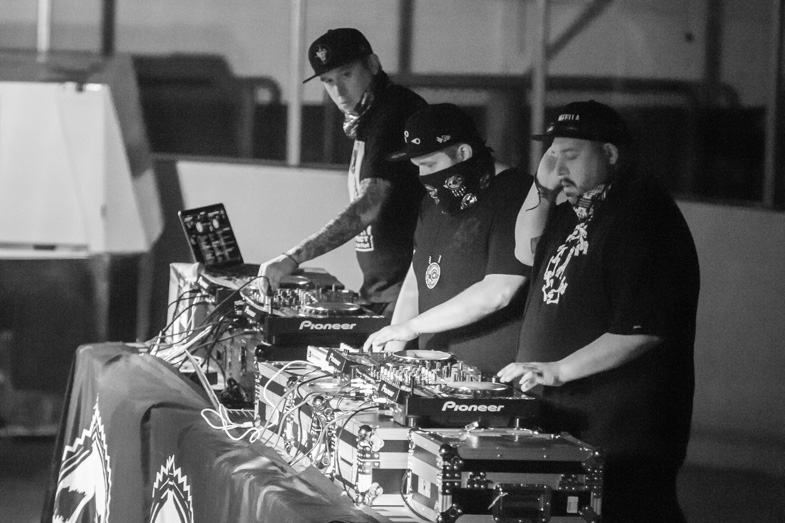 Sault Ste. Marie got a double dose of A Tribe Called Red (ATCR) Tuesday as Bear Witness, 2oolman, and DeeJay NDN took part in a public Q&A and meet-and-greet event at the Urban Aboriginal High School followed by a free evening performance at the Rankin Arena.

The all-ages show was part of ATCR's RezTour and something the Ottawa-based trio has wanted to do since forming in 2008.

"It's something we felt was necessary. When you're talking about youth on reservations, we're not necessarily being accessible to a large part of our audience," Bear Witness told SooToday. "It was really important for us to come and give what we give to the rest of our audience to the audience that means a lot us - the people we're doing it for specifically aren't getting to see the whole package. So we wanted to bring that same show."

Hundreds of fans of all ages gathered at the Rankin Arena to take in the show which included special guest dancer James Jones, and an opening performance from locals Conika and DJ Seith.

"It's about people becoming educated and educating themselves on the things that are around them," Bear Witness told us during an afternoon interview.

"When we first came around, we were talking to Canadians that had never heard Pow Wow music before," he explained. "If you're coming from a culture that doesn't know the traditional music of the land that you're living on, how are you going to respect things that are sacred to us? How are you going to respect us if you don't understand or have the interest to look into our culture? It's all around. You actually have to work to avoid it."

Look for highlights from the day and interview clips to be featured in an upcoming episode of Tuned on LOCAL2.

Bondar and friends gather for special online event and you're invited
Jan 21, 2022 8:32 AM

5 Simple Tips to Help Conserve Energy in Your Home

The Ontario Clothing Company is a classic canadian entrepreneurship story