The story of Escudo Rojo and other delightful wines

How a French wine evolved and gained notoriety with and for Chilean wine producers
Jun 1, 2021 6:00 PM By: Vin Greco 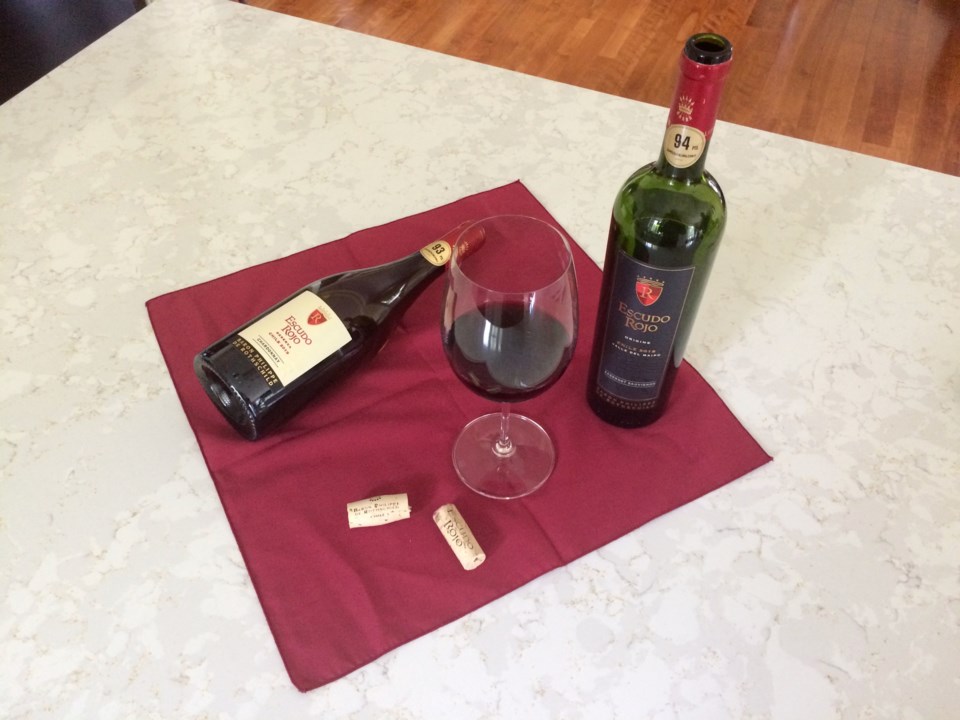 Mouton Rothschild is one of the great Bordeaux First Growths. Originally, it was excluded from the top category in the 1855 classification of Bordeaux wines, but subsequent owner Baron Philippe de Rothschild expended great effort to have the wine finally elevated in 1973.

In his 1954 short story, “Friends from Philadelphia” John Updike writes of the purchase of a 1937 bottle of Mouton Rothschild for the princely sum of 79 cents! If only.

Don’t expect any such bargains today. A 2004 of Mouton Rothschild, 17 years old as was the 1937 in the story, sells for roughly $1,900 on average. The wine, in quality and price, lives up to its First Growth classification.

While there are other, more affordable French wines in the Mouton Rothschild stable, including the Mouton Cadet line, the company under the Baron’s daughter, Baroness Philippine de Rothschild, has made a significant investment into Chile, where, in 1999, it established Escudo Rojo.

Like ‘Rothschild’, Escudo Rojo translates into English as ‘Red Shield’.

The principal focus of the winery, established in the Maipo Valley to the east of Santiago, is on Cabernet Sauvignon, though it also produces Chardonnay and Carmenère. The ‘Origine’ Cabernet Sauvignon 2018, $30, was released in Vintages on April 1, but there is none here, and none available for online orders. Some major stores in Toronto, one in Ottawa, and one in Windsor still have it.

I was able to taste this, along with three other Escudo Rojo wines, and what stands out immediately in all of them is depth and density. In each case, regardless of price (the Cabernet Sauvignon is the most expensive, yet only $30), we are experiencing a wine of substance.

This Cabernet exhibits sweet fruit aromas along with a sense of mint. Forward dark fruit is abundant, but not overly sweet, and at the end, there is a brushed velvet tannin resolve integrated with a gentle acidity. The finish is protracted. After each sip, you can relax, enjoy the lingering effect, and just nod, ‘Yes.’

Escudo Rojo Reserva Chardonnay 2019, $17.95, comes from the Casablanca Valley to the northwest of Santiago near the Pacific Coast. While the proximity to the Pacific tempers everything, allowing for slower ripening and freshness, this was an unusually warm and dry vintage. The wine shows intensity and complexity immediately with, an abundance of spice. Half the wine saw 6 months in oak, the other half under-going 6 months in stainless steel. The result is a wine of pleasing density and smoothness which ultimately gives over to a pleasing, quenching finish with citrus flavours coming to the fore.

Though it is sold out here, it can still be found in many other areas of the province.

Reserva Carmenère 2019, $17.95, and I sincerely hope we will be getting the Mapu Carmenère on the June 12 release.

If “Malbec” says Argentina, then Carmenère is ‘Hands-down’ Chile. Chile – and Escudo Rojo – make many classic varietals well, such as the excellent Cabernet Sauvignon and Chardonnay described above; however, Chile, to all extents, is practically the exclusive producer of Carmenère.

Though Carmenère originated in France, only 10 hectares of that vine, roughly, remain. Once part of the Bordeaux blend, the vine, difficult to bring to full ripeness and susceptible to powdery mildew, disappeared after the phylloxera louse infestation which wiped out vineyards throughout France and other parts of Europe.

It was only by accident in 1991 that Carmenère was rediscovered in Chile, where people had thought it was a Merlot clone. Originally, many weren’t happy with the discovery, as the grape has some characteristics that could make it difficult.

If under-ripe, the wine can taste particularly ‘green’ because of substances called ‘pyrazines’ which can impart flavours of green bell pepper, eucalyptus and cocoa powder.

Over the years, though, vineyard growers and winemakers have recognized that Chile has the perfect climate for the grape, and vine management practices are developing which result in very enjoyable wines. Dropping un-ripened fruit early to concentrate quality, and management of the leafy canopy over the grape bunches to allow more light through for ripeness are a couple of ways in which the ultimate quality of the wine can be improved and perfected.

Escudo Rojo Reserva Carmenère 2019, $17.95 is available here, and will provide a clear lesson on the success Chile now can achieve with this grape.

From the start, the wine, 100 per cent Carmenère, is balanced, supple, and clean. Dark berry fruit is carried on the palate, and a ‘correcting’ acidity brings a bright freshness to the finish, which also introduces secondary herbal flavours that add a grace note to the wine. In all, a very interesting and satisfying wine.

Of the four Escudo Rojo wines, I tried the Mapu Reserva Carmenère 2019 first. I had no expectations, except perhaps a hesitancy about a possible “dig in the ribs” from those pesky pyrazines. I needn’t have worried. I was blown away immediately by the wine’s smooth, harmonious density, its round and lush mouthfeel, and its completeness. On the finish I really did get quiet impressions of coffee and chocolate that might be pyrazines showing themselves in a good way.

What blows me away, even more, is that the price of the wine on the LCBO site is $13.95. If I had been told it was $25, I wouldn’t have been surprised. Instead, I was delighted.  Here’s hoping we see some of this.

In the meantime, try the Escudo Reserva and see what you think. You will find Carmenère very well represented on our shelves, and so there are lots of comparisons one can make. Concha Y Toro Winemaker’s Lot 148, Signos de Origen, and Vina Tarapaca are just a few other good choices in the $18 to $20 range.

Here are some other good wines which are now available as of May 29.

Aveleda Loureiro 2019, $13.95, from the Vinho Verde region has the approval of Roger Voss of the Wine Enthusiast for its “fine, warmly ripe character…smooth apple and Bartlett pear flavours” along with the crisp texture of its finish. - 90.

The firm Barton & Guestier offers a delicious medium-sweet sipper, Les Petites Parcelles Vouvray Chenin Blanc 2019, $16.95, with 23 grams of sugar per litre which will carry suggestions of melon and honey, peach and pineapple. Try it with fresh fruit, or even pork chops, as Vintages suggests.

Pighin is a very much respected in Italy’s Friuli region for its Pinot Grigio wines. The wine undergoes no malolactic fermentation, the process that softens the impact by changing the apple-like acidity to the softer version associated with milk. Thus it keeps its incredible freshness even though the grapes have achieved full ripeness. The 2019, $18.95, is the perfect wine for risottos, or white meats. Italian writer Luca Maroni gives it 92 points.

One of the top producers in Italy’s Campania region (Naples) is Mastroberardino. Their Falanghina Del Sannio 2018, $20.95 is a classic example of the type. Alison Napjus with The Wine Spectator describes it as “lithe and crisp, with flavours of crunchy pear, apple blossom and ground ginger, underscored by a tang of saline that chimes on the finish.” –90.

Rosés are now plentiful on our shelves, and come to us from every corner of the winemaking world.

From the Rioja region of Spain we have the Beronia Tempranillo Rosé 2020, $13.95.  Good value and good flavour here with refreshing tart cherry notes and, according to Vintages, “freshly picked herbs, with just a gentle tug of tannins.”

From our own Niagara, there’s the Peninsula Ridge Beal Vineyard Cabernet Rosé 2020, $15.95. Made from Cabernet Franc, the wine is a straight-forward sipper with some cranberry tartness along with suggestions of cherry and strawberry. Simply serve it chilled and enjoy.

South Africa’Porcupine Ridge has been popular for its red Syrah wine, and now we can try its Rosé 2020, $15.95, made mostly from Cinsault from younger vines, along with a touch of Syrah. South Africa’s John Platter guide tells us to expect “crisp cranberry fruit and some attractive mid-palate weight. 3 stars out of 5.

The most iconic rosés are associated with Tavel in the Rhone region of France. Domaine Maby La Forcadière Tavel Rosé 2020, $21.95 is a fine example - vibrant and deep, it will have great balance with oodles of raspberry and cherry flavour with some herbal grace notes, finishing with a racy crispness.

Les Darons 2017, $16.95, is a re-release from the Languedoc in France’s Midi region. Predominantly Grenache with 20 per cent Syrah and 5 per cent Carignan, it is very tasty and well made. Critic Jeb Dunnock back in 2018 gave it a 91-93 rating, saying it “offers a sensational perfume of blueberries, blackberries, licorice, ground pepper, and earth. Deep, full-bodied, beautifully concentrated, and long, it shows…purity and sexiness…and is going to be a killer value.”

La Posta Angel Paulucci Vineuard Malbec 2018, $17.95, really expresses why Malbec is “Argentina’s grape.” The guiadescorchados.c tells us it “offers juicy notes of cherries and spices, but, most of all, it has lots of red fruits in every direction… [a] wine with  great vigour and brilliance.” - 93.

Cosentino Cigar Cabernet Sauvignon 2016, $19.95, from Washington’s Columbia Valley is, according to winealign’s David Lawrason, “nicely restrained and pretty with typical cab notes of currant/berry fruit, fine herbs and moderate oak. It is medium to full-bodied, quite smooth with balanced acidity and tannin. Very good to excellent length.” – 90.

Wakefield Estate Cabernet Sauvignon 2018, $19.95, from South Australia’s Clare Valley was ranked in the 2019 World Value Wine Challenge Top 10 Red Wines $20 and Under. We are told by tastings.com that it has “fresh aromas and flavours of blackberry, plum, spearmint, chocolate silk pie, new leather, olives and licorice with a satiny vibrant, fruity medium-to-full body and an even, interesting, medium-length finish.” – 91.

There are dozens of other appealing wines waiting for you, as well, Check the shelves, and speak with our wine consultant, Jeanie Fremlin for further great suggestions.