Sylvia Mosher changed people's perceptions of disabilities, one keystroke at a time 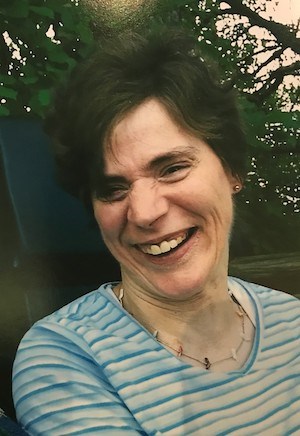 If you ask members of her immediate family, Sylvia Mosher will be remembered as a determined and tireless advocate for people living with disabilities, and an example of what can be accomplished in life through hard work and sheer willpower.

Mosher died Wednesday at Algoma Manor in Thessalon, with loved ones by her side, just days after her 58th birthday.

Her mother, Gwen Mosher, tells SooToday that her daughter was a regular columnist for The Sault Star for about 18 years, advocating for people living with disabilities through her writing.

Although her speech was “not good,” Gwen says she displayed a talent for writing early on in life, and that Mosher could make her "thoughts and wishes known to all" despite living with cerebral palsy from birth.

“Hundreds of people told us they read them regularly,” Gwen said of her daughter’s columns.

Her brother, Paul Mosher - the eldest of five siblings - says cerebral palsy made her movements “very spastic,” but with her left hand, she could strike one key at a time, using just one finger, with the help of a plexiglass keyboard cover that her father had made for her.

The handcrafted device also served her well at Algoma University, where she came just a couple credits short of earning a Bachelor’s degree in English before it was determined that she could no longer live in her Sault Ste. Marie apartment under her own directed care.

“One keystroke at a time, using this special cover over the keyboard that my father had built for her, if you can imagine,” said her brother Paul. “I guess you could say she had an indomitable spirit.”

“She didn’t give up. She kept going, kept persevering.”

During her three-decade-plus stay at Columbian Towers, Mosher was also part of the push for a pedestrian crossing on Northern Avenue near the present-day Metro grocery store, which City Council of the day agreed to implement in 2007.

“There was not a crosswalk there, and it was so hard for the people from Columbian Towers, [that] had a lot of elders as well as [people living with disabilities],” her mother recalled.

Mosher will be remembered Monday during a small gathering at Carlyle Cemetery in Iron Bridge, close to the same area that she grew up in.

Mosher was raised on a farm in a small community known as Dayton Station east of Thessalon. The community, which was situated on the southwest corner of Bright Lake, was once a station on the rail line between the Sault and Sudbury.

Paul says their parents were focussed on giving his sister “the most normal life that they could possibly give her” over the course of her 58 years in this world.

Highly intelligent and wildly popular, Mosher’s dogged determination still leaves those closest to her in awe of her abilities.

“She did so much with so little,” said Paul. “And the rest of us - how far should we have gone, and we didn’t?”