For six years Connie Raynor-Elliott has baking treats to help those affected by addiction
0
Dec 2, 2019 12:30 PM By: Tiffy Thompson 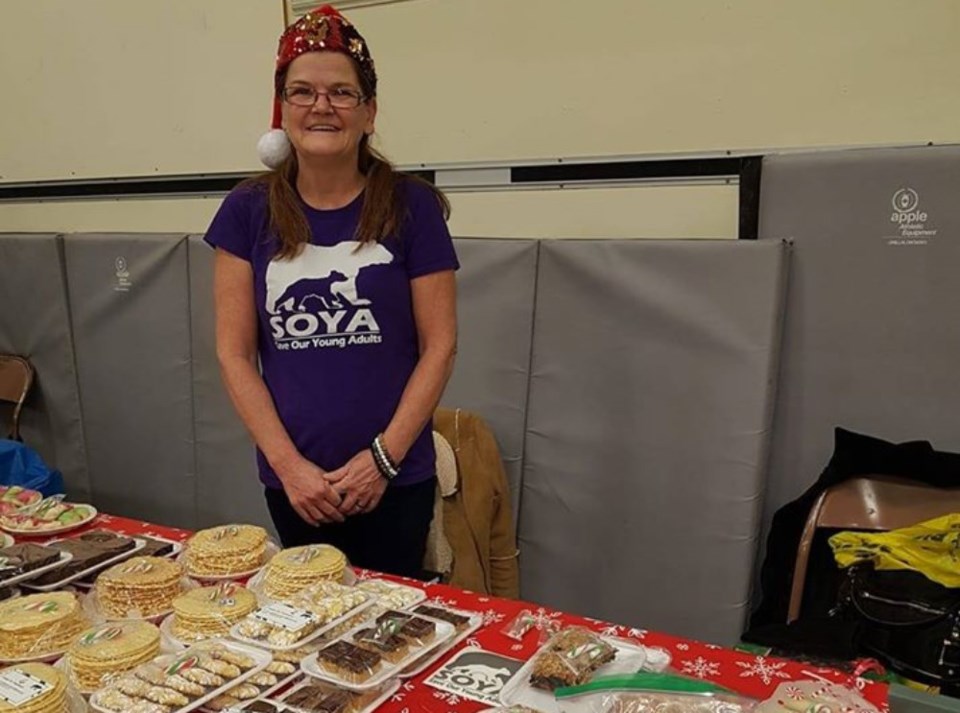 Connie Raynor-Elliott is pictured in this submitted photo

For the past decade, Connie Raynor-Elliott has had boots on the ground when it comes to combating the opioid crisis in the Sault. And this holiday season, she’s got cookies in the oven for the cause.

She founded SOYA (Save Our Young Adults From Prescription Drug Abuse) after her own son’s battle with addiction. When his friend died of an overdose in 2011, she started a Facebook group to support others grappling with this problem. SOYA offers 24/7 support to those facing addiction, and she estimates they have helped more than 1,400 people and their family members.

Raynor-Elliott started Treats for Treatment six years ago to help fund SOYA. After working her shift at OLG, she and her daughter would spend their evenings baking up a storm. They deliver orders year round, with production ramping up around the holiday season. Now, she leads a team of volunteers in baking a variety of delicious treats: everything is scratch-made and delivered within 24 hours of being baked.

“It’s very fresh; we don’t freeze dough,” she says. “We only use the best ingredients. That’s why our baking is so good.”

They provide a menu of offerings but can also bake-to-order; and certain volunteers have their specialties; “like Kelly Iaconis — her lemon cookies? To die for.”

The funds raised through Treats for Treatment go to where it’s needed; from providing transportation to treatment, to Christmas gifts for kids whose parents have died from overdose, to hosting weekly family support meetings, to helping those in recovery find a safe place to stay. They also help organize a yearly Family Matters Conference and a rally and vigil on the National Day of Action on the Overdose Crisis.

“Another thing that’s huge in our city,” she says, “is people raising their grandchildren [as the parents are either in treatment, in active addiction, or have passed from overdose]. And I know a 21-year-old who is raising her two-year-old brother and her three-month-old brother. Addiction affects everybody in every realm. It doesn’t matter who you are; it can take anybody. People don’t think about it until it happens to their family.”

The holidays can be particularly tough, and Raynor-Elliott says that while there is more awareness surrounding the drug crisis, services are still lacking, and overdoses happen daily. SOYA aims to bridge the gaps where health and social services come up short; and their work involves everything from providing transportation to treatment facilities and fostering pets of those in treatment to naloxone distribution and youth education.

The Treats for Treatment campaign is especially crucial this year as the SOYA office was subject to a robbery this past November. Kitchenware, men’s clothing, and even canned food intended for the food banks were all stolen.

“It reminded me of the Grinch;” she said. “They stole Christmas; they even took the gifts we had for the kids. It was unbelievable. I was so disheartened; because they didn’t steal from me, they stole from the community.”

She is determined to recoup the loss, and will be taking orders for Treats for Treatment until Dec. 18, with free delivery until Dec. 22.

What does she want to see happen in the new year?

“I want SOYA to close,” she admits. “I want no more addiction. It’s never going to go away, I know that. I’m not stupid. But I want it so that there is no need for SOYA anymore, at all. That’s my dream.”

For Raynor-Elliott, helping is an imperative. “How can you put a price on somebody's life?” she asks. “I really think that any human being would do anything to save somebody. And I'm not going to give up until everybody's saved. I can’t stop. I was put on this earth for a reason. This is my calling. And one life lost is one too many.”

Place your Treats for Treatment order by emailing constance.raynor@gmail.com - full menu can be seen here.

Local mom helps Grade 12 grads create keepsake video
May 4, 2020 1:45 PM
Comments
We welcome your feedback and encourage you to share your thoughts. We ask that you be respectful of others and their points of view, refrain from personal attacks and stay on topic. To learn about our commenting policies and how we moderate, please read our Community Guidelines.