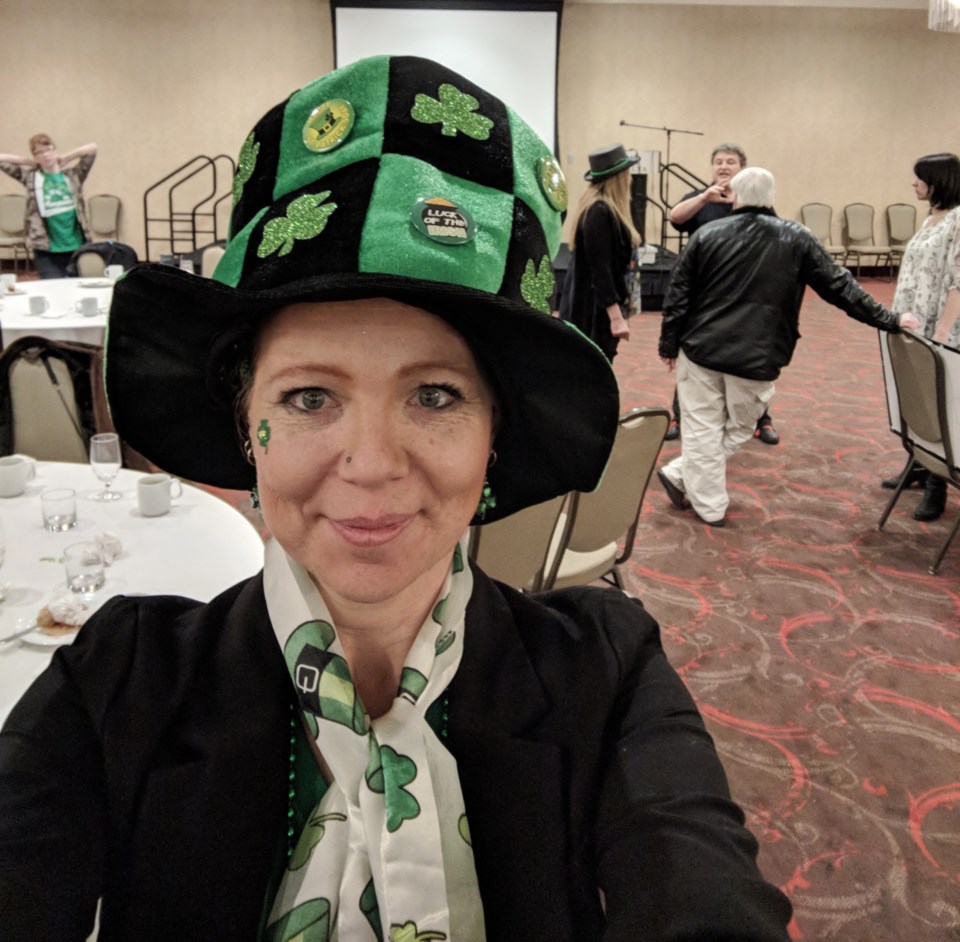 Wendylynn Levoskin is preparing to perform an extraordinary act of giving.

Levoskin received prolonged, thunderous applause from the audience when it was announced by her fellow local drama enthusiasts at the 2019 Quonta Drama Festival awards, held Sunday March 17, she will be soon donating a kidney to someone in dire need of an organ transplant.

“I wasn’t really going to tell anybody but I guess I’ll tell you now that you all know,” Levoskin smiled as she took the podium.

Levoskin said the donor recipient is a Sault woman in her late 20s, with two young children, suffering from a rare kidney disease.

She happened to link up with the woman through Facebook.

“I truly believe that everything happens for a reason. I’m a firm believer in God and I believe He puts things in place for us,” Levoskin told the audience.

“In the next couple of weeks I’ll be going down to St. Michael’s Hospital in Toronto to get a kidney biopsy done, and then after the biopsy they’re going to schedule the surgery, it should be some time in April,” Levoskin told SooToday.

“I thought ‘well hey, I have O type blood too (like the donor recipient).’ I had a doctor appointment coming up so I wanted to see if this was possible.”

Levoskin went through testing and found she was a match.

“Ever since I knew about organ donation I always wanted to do it. I’ve always signed my organ donor card. To be honest, it’s a morbid thing because you have to die in order to give your organs, but technology has advanced so much there’s now a living donor program, and so I’m following through,” Levoskin told us.

“She’s really appreciative (Levoskin said of the donor recipient). I was able to call her on Friday (after discovering she was a match) and I said ‘are you sitting down?’ It was so exciting I didn’t want her to fall over with excitement,” Levoskin chuckled, adding the soon-to-be organ recipient “started bawling and I started bawling. Her mother-in-law said over the phone ‘I don’t know you, but do I love you.’”

“This girl is not doing well. She’s been on dialysis for three or four years now. Her children have seen her get weaker every day.”

“I believe I was put on the planet to help people. I don’t think what I’m doing is amazing. I think what I’m doing is necessary to continue keeping a community together,” Levoskin said, not showing any apprehension about the upcoming operation, telling the Quonta audience her biggest fear for herself was missing this year’s Quonta festival.

She has yet to meet the kidney-receiving woman face to face, but Levoskin said the two already plan to have shirts designed to show they’re ‘kidney buddies.’

Levoskin, 42, is a Sault native who returned from the Waterloo region to work in her hometown as a professional photographer three years ago.

Levoskin shared the 2019 Quonta Drama Festival’s stage manager/producer award with Sandra Houston and Linda Strom for STW’s production of Mending Fences, speaking to SooToday on St. Patrick’s Day (the same day on which the awards were held, sporting a festive hat).

But getting up there on stage and acting, not staying behind the scenes, is her first love when it comes to theatre.

“I’ve been hooked on acting ever since I made my debut at a Quonta festival.”

In an era in which stage and big screen/small screen females are now called ‘actors’ instead of ‘actresses,’ Levoskin said “that drives me nuts. I’m an actress. An actress! I used to be a ‘waitress,’ not a ‘server.’ I’m a woman and proud to be so,” she smiled.

Sensory rooms a hit with autism community, five months after their introduction
Feb 14, 2020 2:24 PM
Comments
We welcome your feedback and encourage you to share your thoughts on this story. We ask that you be respectful of others and their points of view, refrain from personal attacks and stay on topic. To learn about our commenting policies and how we moderate, please read our Community Guidelines.