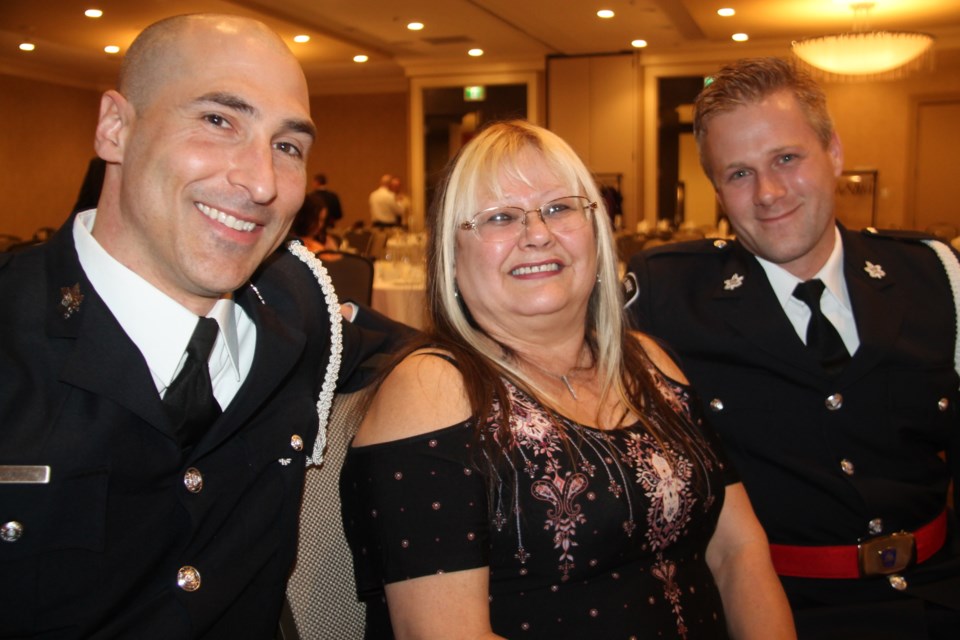 “I was awakened by what I thought was my phone, but it was my smoke alarm going off.”

“When I got up to get out of my bed I couldn’t breathe because there was so much smoke in my room, so I found my cell phone and called 911,” Constable told SooToday at the annual Police Community Programs Night, held Tuesday at the Delta Sault Ste. Marie Waterfront Hotel.

“I was able to get my window open, but as soon as I opened my window more smoke would come in.”

Two officers in a police cruiser — Constable Paul Gravelle and Constable Trevor Pluss — arrived at the woman’s two storey west end home less than a minute after hearing the 911 call.

“I was able to get the screen off my window but I couldn’t get over the ledge to get out, so the officers climbed up to help me get on the overhang over the front porch,” Constable said.

A problem with a faulty light ballast in the home’s basement caused the fire, Constable said.

“I thank God that they were able to get up to my window to help me out.”

There was no one else in the home.

“When we pulled up there was so much smoke you could barely see her in the window.  The fire department wasn’t there yet, and we knew we had to get her out of that window so she could get some fresh air,” Gravelle said.

“We had to get her out on that overhang so she could be safe from all that smoke.”

Gravelle and Pluss were among several police officers, civilians and community groups recognized for heroic deeds and hard work at Tuesday’s awards.

For Gravelle and Pluss, it was their first time dealing with such a situation, but there was no hesitation on their part.

Heroes indeed, but both officers told SooToday it’s just part of their job.

“It was just a natural reaction, we both saw how much smoke there was and we got up on the roof,” Pluss said.

“It was just instinct, you do what you have to do,” Gravelle said.

“It’s what we do.  People say ‘congratulations’ but it’s what we do, we signed up to help people, and I’m just so happy we were able to help her out,” Gravelle said.

“We were able to visit her a couple of hours after in the hospital and we were glad she was going to be okay.  It’s very humbling to be recognized for what we do,” Pluss said.

He too was recognized at Tuesday’s awards for aiding a Nunavut teen who was robbed in town while trying out for the Soo Thunderbirds.

Gravelle and Pluss were not aware Constable was Neveau’s mother at the time of her rescue.

“It’s extra special knowing we could help a family member of one of ours,” Pluss said.

“You hope you never see it (dangerous situations such as Constable’s) but when you do, you act right away.  We’re happy we were able to help, I hope we never encounter that again but in our job it’s a realistic possibility.  (If it does) I just hope I’m able to do exactly what I did and that it has the same outcome,” Pluss said.

“I’m just glad it worked out, for everybody,” Gravelle said.

Below is a list of award winners from Tuesday’s Police Community Programs Night.

Herbert Lash Jr. – foot pursuit and apprehension of a theft suspect who was also wanted by police on outstanding warrants. Held for police.

Eli James Hachey and Tiia Anne Bonin  – foot pursuit and apprehension of a suspect who attempted to steal their motor vehicle. Held for police.

Ryan Creagh and Carly Breckenridge - called 911 regarding an impaired driver.

Algoma District School Board, for its ABCD Program, for ongoing dedication and commitment to student wellbeing through education in the prevention of substance abuse.

Sault Area Hospital Crisis Services, for their partnership and commitment in the development of the Sault Ste. Marie Community Crisis Response team.

RCMP Marine Security Enforcement Team, for its contribution to marine safety and security on the waterways of Sault Ste. Marie and Prince Township.

Constable Beau Neveau - took care of teenage robbery victim from Nunavut who was in town by himself trying out for the Soo Thunderbirds.