The Italian Fesitval was on this weekend and some of the Sault's most senior Italian immigrants were there making sandwiches — again
Jul 10, 2017 9:02 AM By: Jeff Klassen
Previous Next
1 / 1 From now on we'll refer to them as 'The Porketta Sisters'. Elettra Marconi members Ermes Camerini, 85, Sandra Damignani, 80, Anna Nardini, 80, and Marzia Tonucci, 70 are Italian immigrants most of whom have been serving sandwiches at the Italian Festival since 1982 they say. Jeff Klassen/SooToday
Expand
Previous Next

If you went down to Sunday’s annual Italian Festival at the Marconi Club, and if you went down into the lower level to get yourself a porchetta roast sandwhich, you would have seen four ladies laughing away and crouched over a table making sandwiches like they’ve done it for decades.

That’s because they have.

Some of the Ellettra Marconi Society’s oldest members — Ermes Camerini, 85; Sandra Damignani, 80; Anna Nardini, 80; and Marzia Tonucci, 70, — say they've been doing it long enough that a nickname is appropriate.

We settled on 'The Porchetta Sisters'.

These Italian-born grandmothers joined the Sault's Marconi Club in the 1960s shortly after immigrating to Canada, and all of them except Damignani — who joined the sisterhood six years ago — have been making porchetta roast sandwiches at the Italian Festival since 1982.

The type of porchetta roast served at Sunday’s Italian Festival was from the Marche region and seasoned with a variety of spices including garlic, fennel, salt, and pepper.

The ladies job is to usually take the cooled down slices, put them in fresh buns, and wrap them in wax paper for the festival goers.

"We make the sandwiches because they trust us," said Camerini.

"Because we know what we’re doing," said Tonucci.

While getting a good sandwich is serious business for many in attendance, for the sisters, making sandwiches at the Italian Festival is about getting together with friends and family, and having a good time.

"It’s very fun to work with everyone, to see all our friends,” said Nardini. “That’s what the Marconi is all about. For us older Italians the Marconi Club was everything (and) it’s still everything. I’m 80 years old and I still come and work with them because I still enjoy it.”

In some ways, the Sault’s Italian community has changed from back when they joined the Marconi Club, said the sisters.

“When we came from Italy, we tried to keep our culture 100 per cent but with the generation they have now… they feel Italian but it's somehow not like us,” said Camerini, who moved to Canada in 1953 “to find a better life” and then she got married, she joked.

“(But) the new generations are beautiful anyway — with their diplomas and everything. I went to school in Italy but I never practiced here because I never knew the language,” said Camerini. 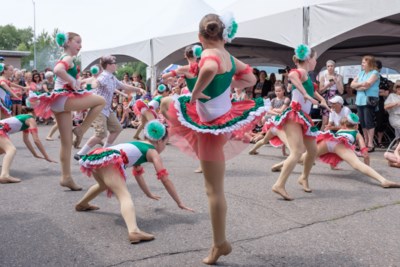 “The Italian community is as large and as strong as we always have been. I think it’s a little more fragmented (but) that’s what this centre is for… to help us keep the culture alive, not just as a place to have banquets,” said Sicoli.

Besides porchetta roast, they had homemade pizza, spaghetti and meatballs, Italian ice cream, Taralli breadsticks, and they released a new food this year — Marconi sausage.

“It’s celebrating immigrants (and) food, family, and friends. Here we are under our tent eating like little piglets enjoying ourselves, and just commemorating who we are, what we did, the old, the young. You (can see) the generations out there. It’s amazing to see the little kids and their grandparents. It’s pretty cool,” said Sicoli.