Sault woman, now an Army Colonel, will review local Air Cadets in May

Colonel Nishika Jardine served with the 155 Borden Gray Air Cadet Squadron as a teen living in Sault Ste. Marie; looks forward to reviewing squadron in May
Feb 11, 2017 9:00 AM By: Darren Taylor 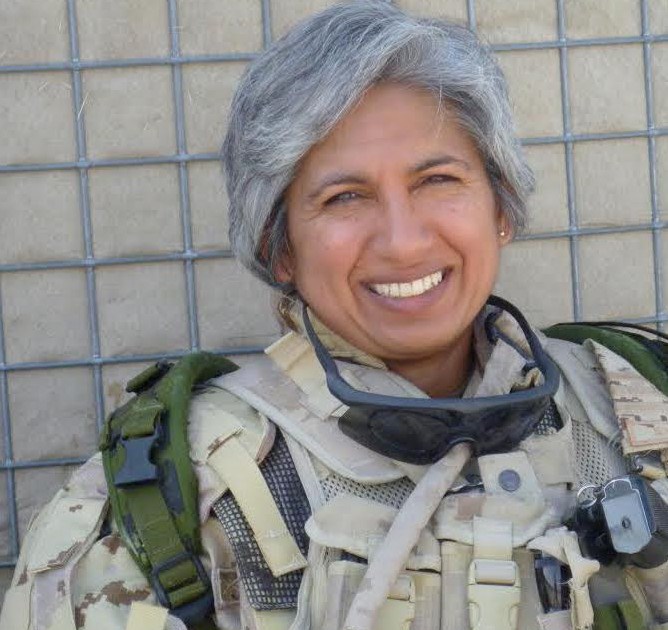 When the cadets of the 155 Borden Gray Air Cadet Squadron celebrate their 75th Anniversary Review the weekend of May 5, they will be reviewed by an extraordinary former 155 Squadron cadet.

Colonel Nishika Jardine served with the 155 Squadron while growing up in Sault Ste. Marie.

Jardine was born in India and moved to the Sault with her family when she was four years of age and studied at Sault Collegiate Institute and Sir James Dunn Collegiate.

She began her postsecondary education at the Royal Military College of Canada (RMC) in Kingston, Ontario in 1982.

Graduating from RMC with a Bachelor of Science (Math and Physics) in 1986, she first served with the Canadian Army as an electrical and mechanical engineering officer and rose through the ranks.

Jardine has held many key leadership roles, such as Staff Officer to the Vice Chief of the Defence Staff from 2001 to 2003, and served in Afghanistan from August 2010 to July 2011.

Colonel Jardine is now based at CFB Borden and is Deputy Commandant of the Canadian Forces College in Toronto, overseeing management of that senior officer training facility.

“It is an absolute honour for me to have been asked to review the squadron that gave me so much. It truly, truly set me on my way,” Jardine told SooToday.

“My success today is in no small part to the foundational growth and development that I got from being a cadet with the 155.”

The review is an opportunity for the cadets to parade and show what they’ve learned and achieved with the squadron.

“I’ve done one of these reviews before and for me it’s a little bit emotional, because I look at these young kids and how hard they’re working. They’ve been challenged, they’re motivated and they work so hard, it’s amazing to see,” Jardine said.

The anniversary weekend in May will mark Jardine’s first ever review of the 155 Borden Gray Air Cadet Squadron.

“I’m sure it will be nostalgic for me, a sense of coming home, to participate again with the squadron where I started, and it’s a reunion weekend so I hope to meet up with people I may not have seen for 35 years or so,” said the married mother of one son, adding she doesn’t get back to the Sault as much as she would like.

“The Sault was a great place to grow up,” Jardine recalled.

“I was attending high school at Sault Collegiate and I happened to live not far from the Armouries, so I went down one evening, signed up and spent five years with the cadets.”

“The friends I made there are long lasting friends, it was a superb experience for a young person.”

“Joining an organization like the Air Cadets, they demanded something of you. You had to show up every week with your boots polished and your uniform pressed, and back in the day we wore brass cap badges and you had to polish that brass.”

“It was very old fashioned discipline and it instilled in me the sense of having to work in order to achieve something, which is a life skill that stands you in good stead for your whole life.”

“We all paraded together, so you learned self control, how to work as part of a team, we used to practice as a drill team on weekend mornings for competitions and we poured our hearts and souls into that.”

“We were there to learn, we learned the basics of flight, it was an opportunity to grow as a leader and learn about citizenship…taking part in activities like the Remembrance Day parade, you learned about being a part of the community, beyond your own personal interests.”

“(Being a cadet) you’re given an opportunity to lead your peers, and it’s done incrementally, it helps you grow and develop as a person and a citizen. I think people who have gone through cadets certainly appreciate the value of community.”

Jardine recalled the parades in particular as “exhilarating.”

After her experience as an Air Cadet and graduation from high school, Jardine was encouraged by a friend to apply to RMC.

“Arriving at the parade square at midnight at Royal Military College was a culture shock. I had been in cadets and I knew how to do drills, but oh my goodness gracious me!”

“Royal Military College is exceptionally demanding physically, emotionally, intellectually…you’re selected to attend, there’s a selection process above and beyond your high school marks because they are producing the leaders for the Canadian Armed Forces, and I had no idea I could do that.”

Jardine credits her mother for encouraging her to get over the initial shock and tough it out.

“It (RMC) truly brought out the best in me.”

“If young women could look at me and see what I’ve achieved, what I would say to them is when I started out I had no idea I could do this, I was just as uncertain as any young person starting out…I had great leaders and mentors along the way, but I would say you can do what you set out to do.”

“If you want it, you can do it. That’s what I would say to young women.”