Sault man to cycle through coldest place in the States 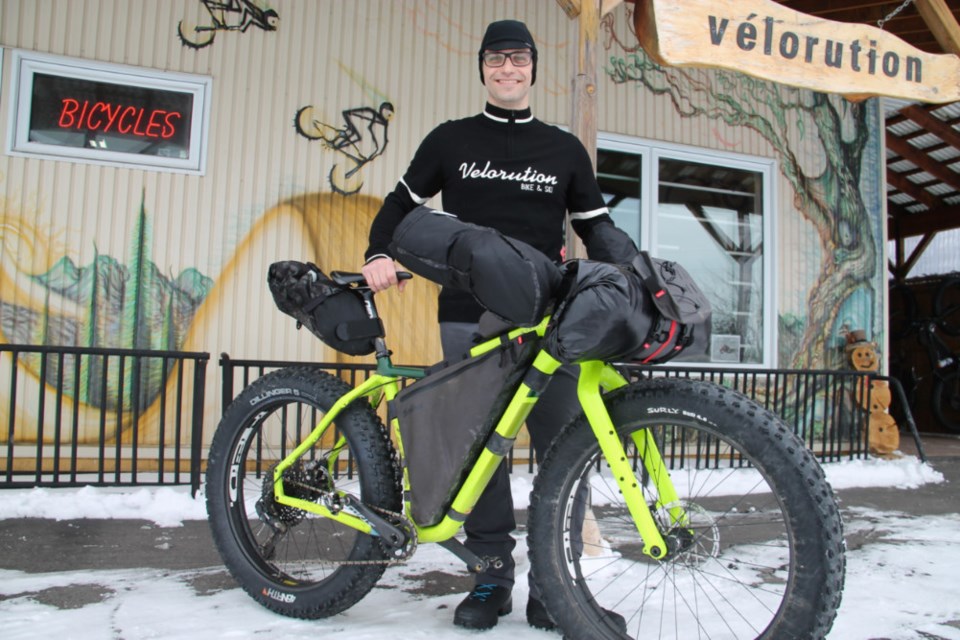 No stranger to cycling competitions, the Sault’s Jan Roubal, Velorution co-owner/operator, is prepping for the Arrowhead 135, an exceptionally gruelling 217 kilometre (135 mile) winter race, to be held Jan. 28 and 29 in the frozen wilderness of Minnesota.

The race has been around for a decade, with three different ways to complete it (running, skiing, or in Jan’s case, fat biking).

Temperatures for the race have been known to plummet to 40 below, last year’s winner completing the race in 14 hours, other competitors completing it in 43 hours (one has to complete the race in 60 hours or less to be awarded an official finish).

“They’re forecasting a steady temperature of around 25 below Celsius (13 below Fahrenheit),” Jan said, speaking to SooToday.

The race will set out from International Falls, Minnesota.

“It’s the coldest place in the United States, colder than Alaska. That’s their claim to fame,” Jan said.

“I’ve known about the Arrowhead for quite a while, and I thought ‘yeah, I like doing things that are hard,’” Jan laughed.

“I didn’t get the chance to do a qualifier for it, so I wrote the promoter a little resume you could say, saying ‘these are the events that I’ve done, this is the time frame I would like to finish in,’ and hoped for the best.”

Accepted to participate in the race, Jan said “I would like to hang with the leaders in the race for as long as I can. It’s tough to project a finishing time because weather conditions can really change, but I would like to finish somewhere in that 14 or 15 hour range. The typical time is anywhere between 11 and 15 hours as winning time. I’d like to be in the top five.”

Jan said 178 racers will put themselves through it this year, about half that number on fat bikes.

Jan will be the lone Sault and area competitor in the Arrowhead 135 in a field which includes athletes from Canada, the U.S., Brazil and several European countries.

An experienced endurance racer, Jan said “I think this is the hardest, most challenging event I’ve signed up for, particularly because of the weather. Riding 135 miles is hard, but it’s doable if you have sunshine and warm weather. This one, with the temperatures being so cold, it’ll be the biggest factor I think. A lot of people get frostbite.”

“It’s the first event I’ve done where I’ve really had to pay a lot of attention to logistics, what I’m packing, what I’ll be bringing.”

In keeping with Arrowhead 135 rules, Jan will be packing a sleeping bag, an insulated sleeping pad to keep himself warm in minus 30 temperatures, a bivy tent, food, cookstove, a container in which to boil water, lights, reflective gear, and various layers of clothing.

Admirable, but why does he do it?

“I find pushing your limits teaches you something about yourself every time you do it.”

“Persevering through really hard things, you learn a lot about the person you are, about your morals, your core centre. I’ve been competing in things since I was a kid and there’s some kind of twisted joy I get through hurting,” Jan chuckled.

“In our current society, in this day, we’re so overwhelmed with always being connected to people with electronic devices. Doing events like this, you disconnect, you’re in your own head and there’s nobody going to do this for you. You come out of this a stronger person.”

“You’re always capable of more than you think you are.”

However, in a wise word of caution, Jan said “push your boundaries (but) find out what you can accomplish, not what you think you can accomplish. Ultimately a winter event like this isn’t something you just walk into,” urging would-be endurance racers to build up their endurance levels slowly.

“I have a friend who lost a toe in 2011 to frostbite. Build up to it. If there’s a big event you want to do, plan some events before that to set yourself up for success. Build up to your goals.”

Jan, 37, has been competing in bike races since he was 17, a past junior provincial mountain bike champion, winner and record-setter in Michigan’s Lumberjack 100, and a participant in last year’s Crank the Shield race, held in the Sault and Algoma region.

Stating he’s not into endurance races for glory or recognition, but simply to test his own physical and mental limits, Jan said “anyone who finishes these events is a winner.”

“Hopefully I come back from this one!” he roared with laughter.

These three wouldn't trade nursing for anything despite COVID-19 stress
May 15, 2020 10:00 AM
Comments
We welcome your feedback and encourage you to share your thoughts. We ask that you be respectful of others and their points of view, refrain from personal attacks and stay on topic. To learn about our commenting policies and how we moderate, please read our Community Guidelines.