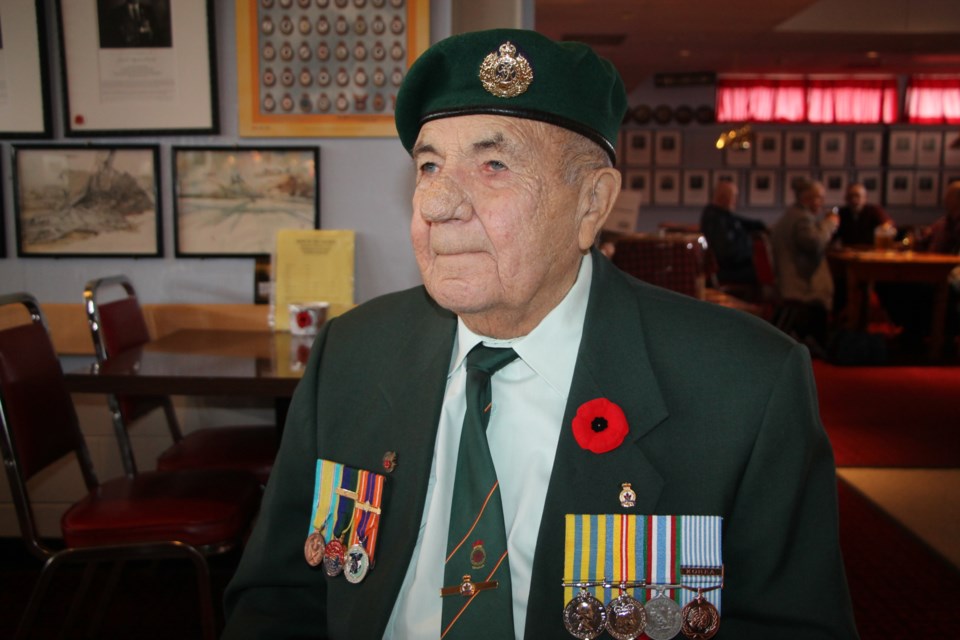 Larry Jollineau comes from a long line of soldiers.

So when the Korean War broke out in 1950, he was quick to join the Canadian Army.

“I was born in the army, more or less,” Jollineau told SooToday.

Several of Jollineau’s uncles had served in the military, and he had himself served as a cadet and with the militia before going to Korea.

A U.S.-led coalition of nations, including Canada, came to South Korea’s military aid under the banner of the newly-formed United Nations.

China entered the war, and a bloody struggle followed until a ceasefire was signed in July, 1953.

“When I was young I knew so many veterans, so when the Korean War started I thought ‘it’s my turn,'" said Jollineau, a Sault native who now lives in Bruce Mines with his wife Nancy.

Jollineau joined the Royal Canadian Engineers with the rank of Corporal and was soon promoted to Sergeant, with several men under his command.

Jollineau and his men were in charge of building and maintaining bridges necessary for the UN war effort and, if necessary, the destruction of those same bridges to keep them from falling into enemy hands.

Enemy forces, of course, did their very best to destroy the bridges themselves.

“The front was a very short distance away, the enemy could see us,” Jollineau said.

“As soon as we got a bridge made they would pound it so we would have to go back and fix them.”

“Bullets would whiz past your head.”

Much of the bridge repair work would go on at night, to avoid enemy fire.

“The guys I had (under his command) weren’t perfect, but they were near perfect.”

Jollineau himself was never injured in the war, and cannot recall any of the men in his unit losing their lives, but he can remember many close calls.

“Wherever we were working, we always looked for a ditch to jump into if the enemy attacked.”

“I landed in a ditch (during an enemy attack), and another guy did the same thing and he landed on top of me…he had a big chunk of shrapnel in his back,” Jollineau said.

“He was hurt badly.”

“Another guy, who was a painter for a living, his arm was injured badly.”

Jollineau recalled one particular occasion in which soldiers from an allied country did not hold their ground.

“If you get shelled you stay down until they’re done, you get up and do your job again, but they (Canada’s allies) ran away!”

“The enemy kept coming and coming and the Van Doos (the Royal 22nd Infantry Regiment, a famous Francophone unit) protected their section.”

“There was a mountain of them (enemy troops), but the Canadians chased them back.”

Jollineau said there were some humorous moments throughout the ordeal.

“We were putting explosives on one bridge because we wanted to blow it, to keep it from the enemy.  An American soldier (spotting an explosive device) said ‘it’s a good thing that’s not real.’”

“One of us said ‘what do you mean?  Certainly it’s real!  Be careful!’ and he ran away.  He thought we were putting dummy bombs down there for practice.”

Because no formal peace treaty was ever signed, Jollineau said “even when the war was over we felt we were still at war, we didn’t know what was going to happen.”

Jollineau and his unit remained in Korea for about six months after the ceasefire.

He continued as an instructor with the army in Canada until he left the military in 1957.

He married his wife Nancy in 1960 and went to work for the Algoma Central Railway, then the PUC. He retired in 1993.

The couple have two sons and two grandchildren.

Jollineau, now 85, estimates there are about 10 surviving Sault and area Korean War veterans.

The vets and their wives meet once a month for lunch (except for the coldest months of January and February).

A memorial service is held annually for Sault and area Korean War veterans at a cairn located at the Sault Ste. Marie Canal National Historic Site.

To this day, Korea remains divided, North and South Korea eyeing each other suspiciously as the Western powers fret over North Korea’s nuclear ambitions.

But, despite all its ugliness, Jollineau feels the war was worth it.

“He had his eyes opened on that trip and when he came home he said to me ‘there’s no question about the fact we had to go to war in Korea,’” his wife Nancy said.

“That country would never have been where it is today if soldiers from Canada and the UN had not gone…there were areas where there was no vegetation, and now they have beautiful gardens which are so nice to see, and the Korean people are so appreciative of Korean War vets,” Nancy said.

Larry told SooToday he and Nancy will continue to attend Remembrance Day ceremonies in Sault Ste. Marie (which have been praised as second only to those held in Ottawa in terms of their quality) for as long as they are able.