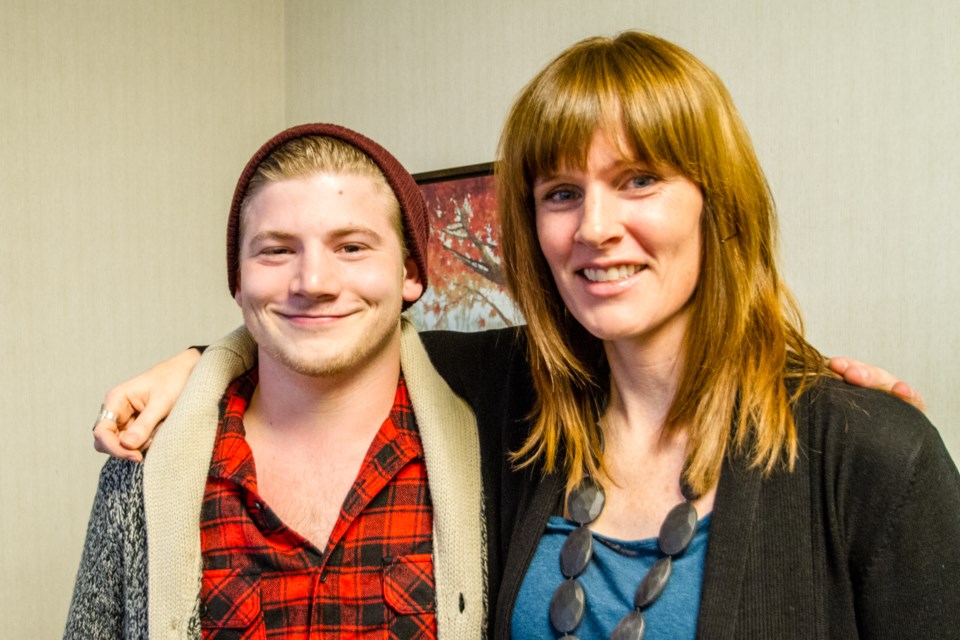 Brody Evans came from a home of severe neglect.

At least that’s what he was told, and thankfully he has no memory of it.

His very first memory, he told SooToday, was that of a car ride – a car ride taking him to his new foster home.

He was just three and a half years old.

Now 19, Evans remains with that same family to this day.

And many of the other children that came and went from the home are not just random foster kids, they’re his siblings.

Evans understands that he’s one of the lucky ones to be under the care of the Children’s Aid Society (CAS) – other foster kids don’t have the luxury of staying with the same family throughout their childhood.

Although he’s never really experienced it himself, he acknowledges there is stigma attached to those referred to as ‘house-hoppers’ as kids come in and out of care, or are bounced from home to home.

A portion of the general public believes foster children are all troubled or bad kids, a stereotype he feels is misplaced.

“At the home, you’re just a kid. You’re there to be cared for,” Evans explained. “It’s when you get out in public that people start raising stigma because you’re associated with a certain group. It definitely dials back to the way everything is made. You’re supposed to fall in line, and not everyone falls in line. Sometimes people have troubles based on past experiences, and they don’t learn certain ways.”

Always an attentive student, Evans excelled in school and is now in his final year of university.

His teachers, principals and fellow classmates never treated him any different and were often surprised to find out he was a foster child.

“The more you just present yourself as a normal person, the more people will treat you that way as long as you’re really assertive about it,” he said. “I’m not a foster kid, I’m my parents’ son.”

“It’s all about who you’re surrounded by,” he continued. “If you have good foster parents, it doesn’t matter how long you’re with them as long as they actually care about you and treat you the same as everyone else.”

“If you can get that same kind of connection and longevity in a relationship, it’s basically adoption when you’re fostering.”

Erin Hopkins and her husband have been fostering children for three years.

Wanting to expand their family and believing they couldn’t have any more children of their own, the couple had two young children at home when they decided to start fostering.

As a short-term respite caregiver, Hopkins has fostered approximately 20 children through the CAS.

“Our longest placement was a couple of months and I was quite distraught when he left,” she said. “But it’s not about us. It’s about the children, so that really supersedes our own feelings at the time.”

“(Fostering) may start out as a selfish need, but it quickly grows into a selfless act,” Hopkins explained. “It fulfills both parties. It’s really a win-win assuming that’s the person’s starting point. And it’s OK for it to start out a little bit selfish because a lot of it is that you have to mature as a foster parent simply by doing it. There’s a lot things you don’t know or have the wisdom for until you actually do it.”

After recently giving birth to her third child – a happy surprise for the couple – the Hopkins’ home is on temporary hiatus from foster care as the couple adjusts and settles in.

But when the home is opened up again, they hope to be able to take in children for more extended stays.

The CAS works very closely with foster parents to find the best match for the family and the children in need, she said.

Hopkins wants the public to know that there is great demand in our community for homes to foster “sweet, innocent children in need,” something she feels is easy to provide.

“CAS really helps you set that up quickly and efficiently,” she said.

“Every child we’ve had in our home has been absolutely precious. They’re in need,” she said. “There’s a real stereotype around foster children, and I have to say it’s wrong. They may have special needs coming out of the situation they’re in, but they’re often quickly resolved with consistency.”

What the CAS does

Michael Barbeau, CAS resource supervisor, feels the stigma surrounding foster care has subsided over the last two decades thanks to community focused outreach through schools, churches and other organizations.

“We’re out there telling stories about the kids, and it’s not about CAS or abducting or taking children,” he said. “We have evolved over the last 15 years to really inform the public about what we do. Not a lot of people understand what we do and how we do it.”

Contrary to popular belief, said Barbeau, the prime directive of the CAS is to keep children in the home with the parents.

A very small portion of calls made to CAS actually result in a child being removed from the home.

“We assist families in helping manage and have the children remain in their own home,” he explained. “That’s what I’m very proud of, and that’s what the public doesn’t see.”

“We are dealing with somebody’s most prized possession – their children. At the end of the day, it’s about the best interest and the safety of the child. We don’t arbitrarily go in and steal children. There are thresholds that have to be met.”

Sometimes, outstanding circumstances such as addiction, poverty, mental health issues, and/or lack of resources will result in a child coming into the care of the CAS.

And, unfortunately, there are almost twice as many children under the care of the CAS as there are available foster homes in Algoma, Barbeau said.

However, the CAS works with other community partners and organizations to combat the factors that lead to the need for foster care.

“These are real adult issues that kids have to deal with,” Barbeau said. “There are multiple reasons, and multiple levels of government that have to collaborate to fix it. It’s definitely a community burden.”

“We can’t stand on our own island,” he continued. “We need the resources and capacities the other agencies have. We have a lot of specialized cases now, and mental health has become a huge awareness. All the agencies and all the ministries within the government and our city realize that it takes a community to raise a child and help a family.”

There are a number of ways the public can assist. To find out more, please visit the Children’s Aid Society of Algoma online for more information.

November is Adoption Awareness Month, and the CAS will host and information session at it’s head office located at 191 Northern Avenue on Monday, Nov. 21 from 6 to 8 p.m.

Sault paramedics carry on through added COVID stress, express thanks for community support
May 28, 2020 2:30 PM