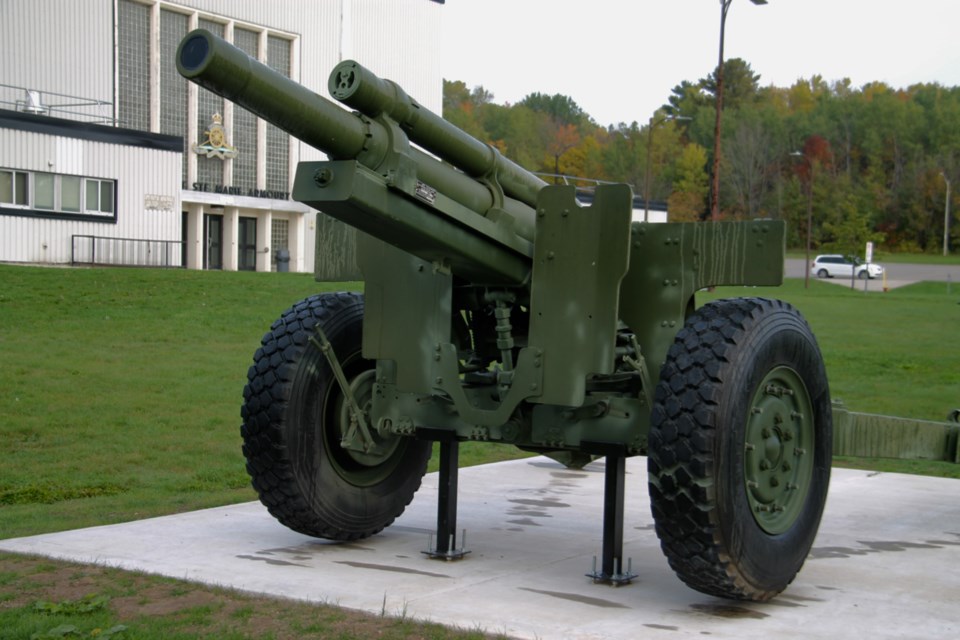 It isn’t often SooToday publishes a Great Story about an object instead of a person and his/her achievements, but the story behind how the 49th (Sault Ste. Marie) Field Regiment, Royal Canadian Artillery, obtained an historic 105 mm Howitzer artillery gun for permanent display in front of the Sault Ste. Marie Armoury is an interesting tale.

“That particular type of gun has been crewed by probably thousands of men and women from the Sault over the years, so to have it in front of the Armoury now is an amazing symbol of their dedication.”

Knox, now the Sault Ste. Marie Museum board of directors president, said he was delighted to finally find a Howitzer to be mounted after a long and often frustrating search.

“It was a real challenge trying to find one. I hit a lot of dead ends,” Knox said.

In 2017, Knox, as commanding officer of the regiment (before his retirement in March 2019), began making inquiries about how to acquire a 105 mm Howitzer. The search was a difficult one because that type of gun is still in use by the Canadian Armed Forces (CAF) and the Royal Canadian Artillery (RCA), so requests to the RCA were unsuccessful.

Turning their efforts to private sources, Knox and his colleagues discovered there were a number of privately owned Howitzers, some of them available for sale.

They found the cost of those Howitzers, however, to be a bit steep.

It was learned a U.S. military program provided decommissioned guns to various U.S. groups, but there was a 10-year waiting list for those guns.

Then, another opportunity came up.

In 2018, Knox received a phone call from retired Brigadier General E.B. Beno, who Knox had met previously during a visit to France.

Through a friend of Beno’s in the Maritimes who knew of a gun collector, a 105 mm gun was located.

The gun collector was Francis Atkinson, who died in Dec. 2017. The Howitzer had been acquired a few years earlier from a Department of National Defence (DND) monuments program and for a short time had been displayed in front of a museum in Fredericton, New Brunswick. After the museum closed, the gun was moved to the Atkinson family cottage property.

Mary Atkinson, Francis Atkinson’s widow, was interested in seeing the gun more prominently displayed. The gun was in very good condition, professionally decommissioned by the DND.

Beno informed Knox of the gun’s availability and of Mary Atkinson’s willingness to donate it.

“The initial interview over the phone with Mrs. Atkinson, who owned the gun, went well. The follow up face to face meeting with her (in New Brunswick in 2018) went extremely well and we signed the agreement of transfer that same day.”

“She’s a wonderful woman, and she really wanted to see the gun displayed in an environment where people could see it, and for an artillery unit that uses that gun to have a place to mount it, and on a street like Pine Street in front of the Armoury where it’s going to be visible, she couldn’t think of a better spot for it to be,” Knox said.

“She was quite proud of her husband’s collection, and pleased to see that gun being presented in a more public venue.”

“Then I hit another roadblock of ‘how do I get the gun back to Sault Ste. Marie?’ because it’s not a DND asset so I couldn’t use DND resources to transport it,” Knox said.

“I had a truck lined up, but then its transmission went out, but another former gunner (retired Warrant Officer Sandy Ross) stepped up and said ‘hey, I’ve got a truck and I’ve got a friend who’s got a trailer,’ so the four of us (Knox, Ross and their wives) piled in and drove for two days to Fredericton, picked up the gun on the third day and then drove for two days to get home.”

The official recipient of the gun is the Lest We Forget Remembrance and History Library, located within the Sault Ste. Marie Armoury.

The cost to carry out the entire project came to less than $5,000, Knox said, the money not coming from the DND, but from the 49th Senate’s own fundraising efforts.

Construction of the pad for the gun mount came about with the help of local companies, Fisher-Wavy Concrete supplying the concrete and Pioneer Construction providing the labour, gravel and construction.

The gun was officially dedicated at a ceremony held Sept. 28 at the Sault Ste. Marie Armoury, with Bruce Pearce, a member of the 49th Field Artillery Regiment’s Senate, serving as master of ceremonies, Knox delivering a speech outlining the story of how the Howitzer was obtained.

People involved in the gun project, the regiment, local dignitaries and the public were invited.

Local contractors and businesses who provided the gun pad were acknowledged and presented with mementos, a reception following.

The 49th transitioned from medium anti-aircraft guns in 1961. Since then, the regiment has used the 105 mm Howitzer, first using the C1 version, today’s gunners operating the C3 model.

The two anti-aircraft guns mounted in front of the Armoury reflect the past, but until now, the regiment had nothing to indicate the present.

“I hope that every gunner that served with that type of gun in any capacity, as they drive by the Armoury and see it, thinks fondly of their time with the regiment,” Knox said.

Sault company steps in to save Algoma district Meals on Wheels program
Jun 26, 2020 9:00 AM
Comments
We welcome your feedback and encourage you to share your thoughts. We ask that you be respectful of others and their points of view, refrain from personal attacks and stay on topic. To learn about our commenting policies and how we moderate, please read our Community Guidelines.