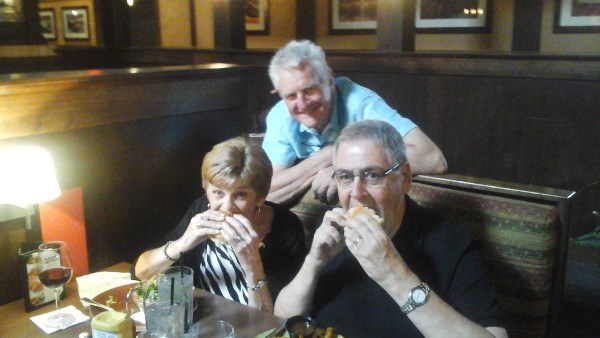 There is quite a background story to that particular act of hospitality.

Back in 1963, Ross was awarded a certificate stating he was a “Doctor of Hamburgers” by the management of J.J.’s Hacienda, a restaurant owned and operated by Hilsinger on the site where his Water Tower Inn (also the home of Casey’s ) now stands on Great Northern Road.

The Hacienda would award the certificates to customers as an award for trying all seven of the Hacienda’s hamburgers, a promotion held in the early 1960s.

“After the last one I received my certificate.”

Ross, a Sault native and retiree who worked in the chemistry lab at Algoma Steel in the mill’s glory days, now lives in Brockville, Ontario, currently visiting family members in his hometown.

A sentimental man who developed an attachment to the hamburger certificate and who loves to share memories of his days in the Sault, Ross kept the certificate in his possession for years, only to discover he had misplaced it after moving to Brockville 15 years ago.

Ross said he decided, on this particular visit to the Sault, he would approach Hilsinger and ask if he had kept duplicate copies of the old certificates, or if he could at least arrange to get a duplicate of his certificate printed.

“I went into the Water Tower Inn and I told them the story, and the girl at the front desk said ‘we’ll have J.J. call you.’”

“He called me on my cell phone and he asked “is ‘Doctor Ross’ there?,” Ross chuckled.

“I’d have to dig around (in the office), but it may not even be there,” Hilsinger said Thursday, adding an unofficial copy drawn up by a graphic designer just wouldn’t be the same.

“It wouldn’t be as historic,” Hilsinger laughed.

“I can feed him a free hamburger at Casey’s and it could sort of be his reward.  I can buy him a hamburger and he could tell me if it’s as good as the ones he ate back then.”

“I’d be glad to meet him and host him,” Hilsinger said.

He clearly remembers the 1960s “Doctor of Hamburgers” certificates offered at J.J.’s Hacienda.

“People still come here and want to know if I have the recipe for the Hacienda sauce.  Our burgers were always made with lean meat.”

So what did Ross think of the Casey’s burger?

“They were bigger and much better than those of J.J.’s Hacienda back in 1963,” Ross said gratefully, adding Hilsinger told him he would search for a copy of his lost “Doctor of Hamburgers” certificate.