It's a glow-in-the-dark cloak for kids with a very bizarre backstory
Sep 26, 2017 12:11 PM By: Jeff Klassen
Previous Next
1 / 1 Terry Sachetti and his five Force Field Cloak designs with lights on and off. Sachetti, who is from Sault Ste. Marie, came up with the idea in the 1980s and now, in 2017, is finally getting the cloaks out to the public. Image supplied
Expand
Previous Next

Right now, Terry Sachetti is amping up to provide children across the earth with force field cloaks so they can protect themselves from the intergalactic ‘Forces of Fear’.

However, as more and more kids get these cloaks, says Sachetti, the force fields will start to work together like a powercell.

“Once we get to that saturation point, a huge energy field will envelop the earth, creating synergy and enough power for an impenetrable force field around the earth itself, protecting all children and people from the Forces of Fear,” he said.

Sachetti’s talking about a real invention he came up with in the 1980s — glow-in-the-dark blankets that help kids get over various night-time fears.

Actually, he winces when people call them blankets — even though he also uses that term sometimes.

“It’s more like a bed accessory, kids wear it and can make a tent out of it,” he said. 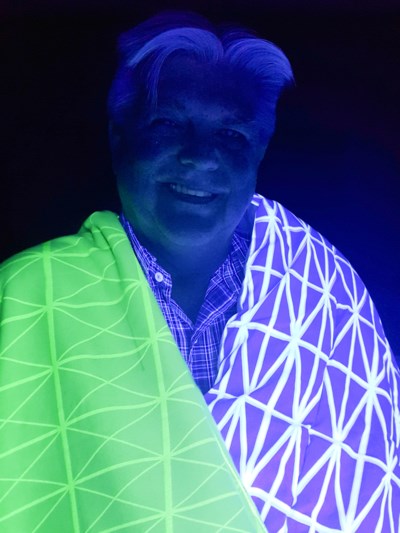 Terry Sachetti demonstrating the 1980s Force Field Cloak (left) vs the new one developed in 2017 (right) under a black light. Image supplies

When he finished school in 1981, he moved to Minnesota and started a family.

Around that time, he heard a radio show that had an anecdote about a mother who helped her young son conquer his fear of night-time monsters by covering up an aerosol air freshener can with the words ‘Monster Repellent’.

“What (the boy) had was an imaginary tool to get rid of imaginary problem — and it worked for him,” said Sachettii.

Sachetti realized the only way to fight a child’s imaginary monster, is with a weapon of the imagination.

“It’s almost like child psychology. As kids, we gave our blankets the imaginary power to protect us against things. I thought I would take it one step further,” he said. “What is the most powerful thing in cartoons? It’s a force field, an impenetrable shield.”

He came up with the idea of creating glow-in-the-dark blankets marketed to kids as force fields.

“The only way to give (the blanket more) power was to make it visible, because our imaginations our invisible,” he said.

Without any special background in science or chemistry, Sachetti said he researched everything there was to know about glow-in-the-dark chemicals and came up with his own patented ink formula that he says won’t fade in the wash and glows for hours.

This was all in the 1980s and he was very deep into the idea even then.

In 1989 he had a meeting with marketers at the department store chain Target.

At that time, fifteen marketing specialists looked at his Force Field Cloak ('Force Field' is trademarked), loved the idea, but told him he needed to come up with more of a backstory behind the product he said.

In just three days, he rushed to come up with this wild story about the origins and complex imaginary universe behind the cloaks.

“The truth of the matter is that I came home, had a couple Canadian whiskys, and wrote the story,” he said.

It’s too weird and long to get into (Google it), but essentially — ahem — the force fields are ‘woven’ by ’trillions and trillions’ of species of cute, bug-like glowing aliens called Ebes who are made up of ‘pure Force Field essence’ and create blankets using that essence and with designs unique to their species and size.

There’s also good guys and bad guys — the TriStar-4 Cosmic Intelligence Alliance Q19 (good guys), and a special Task Force of Fear from Destron in the evil galaxy of Zirideon, or more commonly known as, The Forces of Fear (bad guys).

Each character in The Forces of Fear represent a real fear that children have, said Sachetti.

Mirage – ‘When you lie in bed at night, she’s the one making shadows look like witches.’

Nightmare the Dreamweaver – ‘He holds a high-tech device that has every scary movie or scenario ever imagined on it and with that system he will put you into a nightmare, tuning it into your dreams.’

Commander Croeden – ‘He’s the one that gets you to think about scary things by using telepathy.’

Bump and Creek – ‘They make al the odd sounds at night that make you think something is there.’

Circuit Breaker – ‘He’s the one that makes sure all the night lights and hall lights burn out and tries to short circuit your force field.’

In the end, Target didn’t bite on his project because he didn’t have the manufacturing set up back then, said Sachetti. Throughout the 90s and 2000s, he occasionally put the cloak on the backburner, though people would often ask him about it.

It wasn’t until a couple years ago when his friend Aaron Bible ran into him and then, after a year of bugging him on the phone, finally wore him down to get the project started again.

Sachetti said in the last year he’s established manufacturing connections in China and updated the 1980s formula so the cloaks can now glow for 8-10 hours. And they're even more resistant to fading (they basically won’t, he said).

Sachetti said he has tons of characters, a back story, blanket designs, and other big ideas that haven’t been released yet. But if his product does succeed, people can expect to see a whole universe of products.

Right now, however, the blanket is just in a Kickstarter stage, though some porotypes already exist.

Kids can lay on them, charge them with the lights on, then get up and turn the lights off and a silhouette will remain from where they were.

The Glow Company, of which Sachetti is founder and CEO, is currently taking orders on their Kickstarter and, Sachetti said, if anyone orders now they can get them before Christmas.