United States Coast Guard save dog from uninhabited Michigan island after it crossed the ice from Canada
Jan 4, 2019 8:30 PM By: James Hopkin 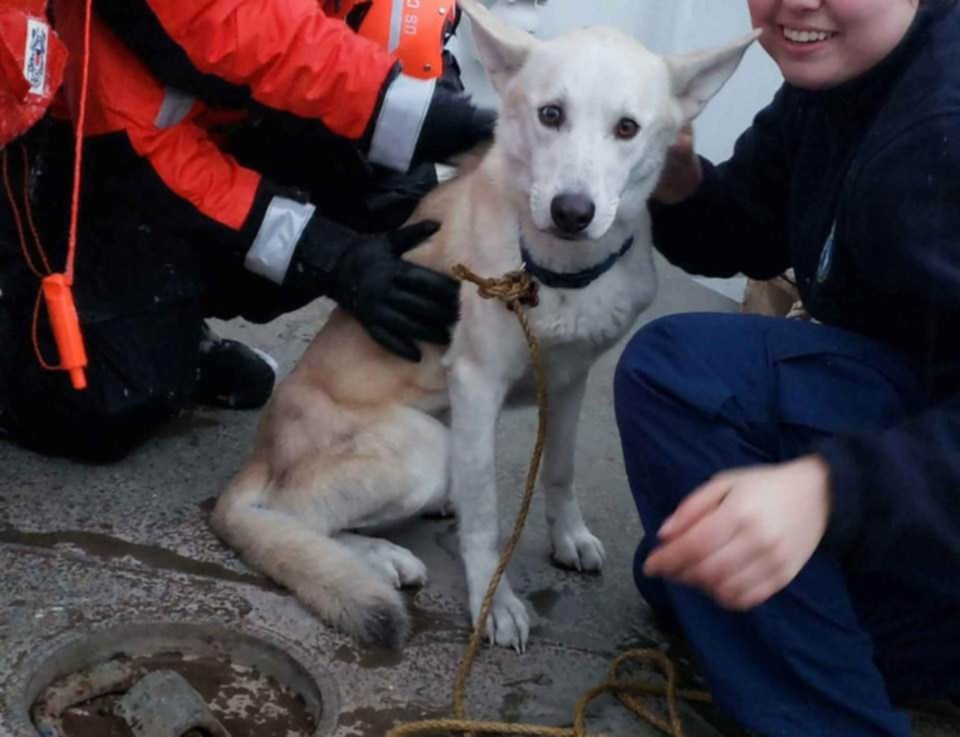 Logan ran away from his owners Christmas Eve while they were visiting family on St. Joseph Island. The three-and-a-half year old husky/belgian malinois mix was found on Lime Island by the United States Coast Guard 11 days later. Photo supplied

A Guelph, Ont. couple is praising the efforts of the crew aboard the USCGC Mackinaw after the coast guard managed to rescue their dog from Lime Island, Mich. after it went missing on St. Joseph Island.

Logan, a three-and-a-half year old husky and belgian malinois mix, was missing for 11 days before being rescued.

“I was just speechless, and I was so happy,” said Logan’s owner, Kailaan Walker while speaking to SooToday Friday from Cheboygan, Mich., where he and his partner were waiting for the USCGC Mackinaw to return Logan. “He’s only three-and-a-half, he’s got a long life ahead of him.”

“It just seems incredible to think that he survived that long and made it all the way to Lime Island, you know, across the ice and everything.”

Kailaan Walker and his partner, Lydia Selin, were visiting Selin’s family in the Richards Landing area when they decided to take their two dogs for a walk on Christmas Eve.

The couple tried following Logan’s tracks, but to no avail.

“We put up posters, and we were driving around talking - further and further [from] where he went missing on the farm - with neighbours and such, just trying to get the word out that he was missing,” Walker said.

The couple eventually had to cease their search efforts and go back to Guelph.

“It was really hard to drive home with only one dog in the truck,” said Walker. “I remember getting home and just feeling so out of place.”

On Thursday, Walker noticed that he had an incoming call from a Michigan phone number.

“At first I thought it might have just been spam, I wasn’t going to answer it,” he said. “But then it clicked in my brain. I thought, ‘gee, Michigan - that’s pretty close to Sault Ste. Marie. I best answer this phone call.’”

The United States Coast Guard informed Walker that Logan was safe and sound - aboard the USCGC Mackinaw, a vessel that’s used as an icebreaker throughout the Great Lakes.

Walker readily admits there may be a couple of gaps in his story, but he recounts the story of Logan’s rescue as it was told to him by the coast guard.

“They saw the dog on shore at Lime Island, and they meant to stop the boat near the island, and Logan ran out on the ice,” Walker said. “They couldn’t get to him...they were all afraid.”

“A whole bunch of crew were watching on deck, watching this happen - they all thought they were going to witness the dog drown.”

The crew aboard the USCGC Mackinaw watched as Logan scampered across the ice to the shoreline of the small, uninhabited island.

Crew members eventually made it onto shore in search of Logan, but the dog “hightailed it off into the woods.”

“They ended up building a bonfire for him that night, which is incredible,” said Walker. “They put out macaroni and cheese and ribs for him.”

When the coast guard came back the next day to search for Logan, they noticed that the food was gone.

“They were calling and looking for him, and then he came out,” Walker said. “He was a bit skeptical, I guess, but they kind of befriended him and won his trust.”

“He came over and they were petting him, and he still had his tag and collar on - almost 11 days later. It’s a miracle.”

Logan has thinned out considerably and suffered some frostbite while lost in the wild, but Walker says the coast guard was advised by a veterinarian in Michigan on how to care for the dog while on board the icebreaker.

“It’s been really interesting the last several days - a lot of emotions,” said Walker. “When we left the island, it was really hard to leave.”

Walker and Selin are scheduled to meet with the crew of the USCGC Mackinaw at the United States Coast Guard base in Cheboygan Friday evening to reunite with Logan.

“I’m just so thrilled and so impressed by these men and women on the crew of the ship,” he said.

The United States Coast Guard was not immediately available for comment.

Upgrades on hold, hotel plan up in the air as pandemic continues to impact Sault airport
Aug 3, 2020 9:00 AM