'Bootless Joan' is no Trump, but she gives what she can

Joan Foster has battled cancer twice in the last two decades and in return she has made it her mission to raise $20,000 for the Sault Area Hospital Foundation
0
Oct 21, 2016 3:12 PM By: Donna Hopper 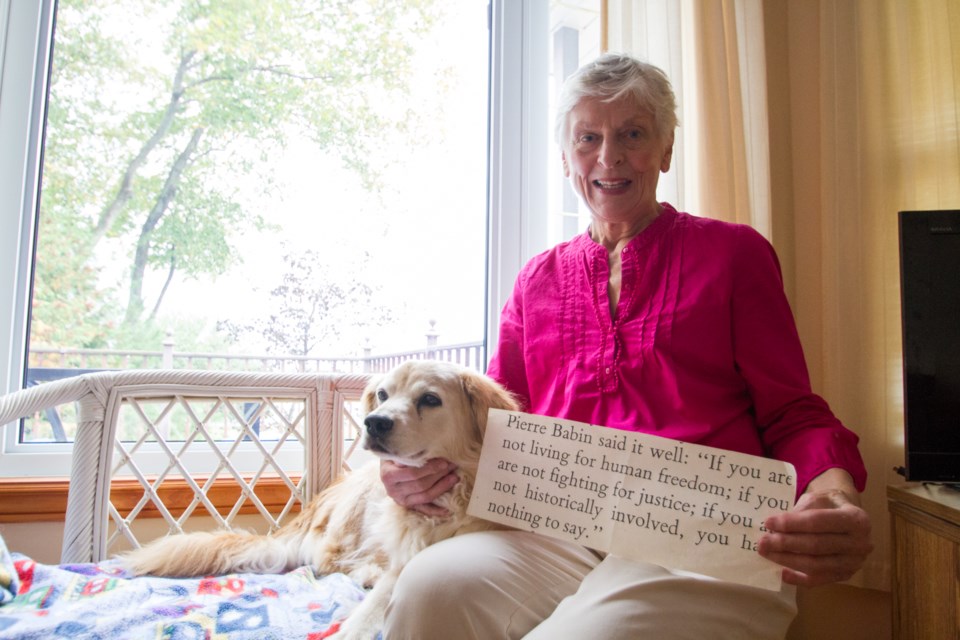 Joan Foster, her dog Tracker and a Pierre Babin quote that inspires her to give back. Donna Hopper/SooToday

There are number of reasons the name Joan Foster rings familiar with many Sault and area residents.

She’s a teacher, and actor, a writer, a volunteer, and an avid supporter of the local arts and theatre community.

Through her decades of involvement with the Arts Council of Sault Ste. Marie and District, Foster served as a board member, has chaired numerous fundraising initiatives, and was co-founder of the Over the Rainbow Children’s Entertainment Series.

She has been involved – both on stage and behind the scenes – with the Sault Theatre Workshop and the Musical Comedy Guild, co-moderated World Religion Day, helped organize the Business and Professional Women’s Club Sault Ste. Marie Homecoming Event, and named the Spirits Rising glass and steel structure that adorns our waterfront boardwalk.

What many may not be aware of is Foster is also a seasoned adventurer who’s survived cancer.

At 78 years old, Foster has seen her fair share of the planet, climbing mountains, rafting wild rivers, and trekking through the tundra of the Canadian Arctic.

She’s acquired a few endearing nicknames along the way, including ‘Saint Joan of the Lost Soles’ after her shoes melted climbing Mount Etna (an active volcano) and ‘Bootless Joan’ after jagged Arctic rocks sliced her boots apart in Northern Canada.

But conquering both lung and breast cancer and the philanthropy that followed may be her greatest achievement.

For the last ten years in an effort to bring comfort to cancer patients and as a means of raising funds for the Sault Area Hospital Foundation (SAHF), Foster has been quietly selling The Cup of Comfort.

At $10 each, the gift package consists of a mug, tea bags, candies, and a poem Foster wrote to inspire those suffering through treatment.

This cup is filled with comfort for days you’re feeling blue
It’s also full of pride and joy for all the things you do
Many days as life goes by, we think we’ll not get through
The sorrows, fears for family, friends, our own afflictions too
We feel alone when an illness strikes, we hide our pain from view
We put on such a happy face, we fool ourselves and you
But friends have ways of listening to voices filled with pain
They sooth our spirits and fill our hearts with hope again

To date, Foster has raised just over $17,000 for the SAHF through sales of her Cup of Comfort.

Health awareness is also crucial to Foster, who admits to missteps as she underwent cancer treatment.

After having half of her left lung removed in 2003, she opted out of radiation treatment, something she feels contributed to her cancer’s return a few years later.

“I thought radiation would be the worst part about having any kind of cancer. I didn’t want to end up worse off,” she said. “I regret that because I think that’s one of the reasons I developed breast cancer.”

“I think the biggest factor in fighting cancer and conquering it is being aware of your body and changes that occur. If you have a question or are feeling different, go to the doctor.”

She also stressed the importance of ensuring your doctors and specialists properly and fully communicate with one another.

Now in retirement, Foster has sold her Queen Street home and is preparing to move into the Finnish Rest home.

All proceeds from the sale of household items and her massive collection of art will contribute to her $20,000 donation goal to the SAHF.

She has donated a number of her antiques to the Sault Theatre Workshop and contributes regularly to the Group Health Centre’s Dr. Hui Lee Trust Fund.

And before even moving in, Foster has made arrangements for a special library at the Finnish Rest Home for residents and their grandchildren to enjoy.

During her time as a teacher, Foster found a Pierre Babin quote that she says continues to inspire her:

“I can kneel down and recite something, but that just becomes recital because your mind wonders. But if you’re actually physically doing something to help someone, then that’s praying to me. I’m not good on my knees, but I’m good at working.”

“I’m not Donald Trump. I don’t have millions because I still pay taxes, so I just give what I can,” she joked.