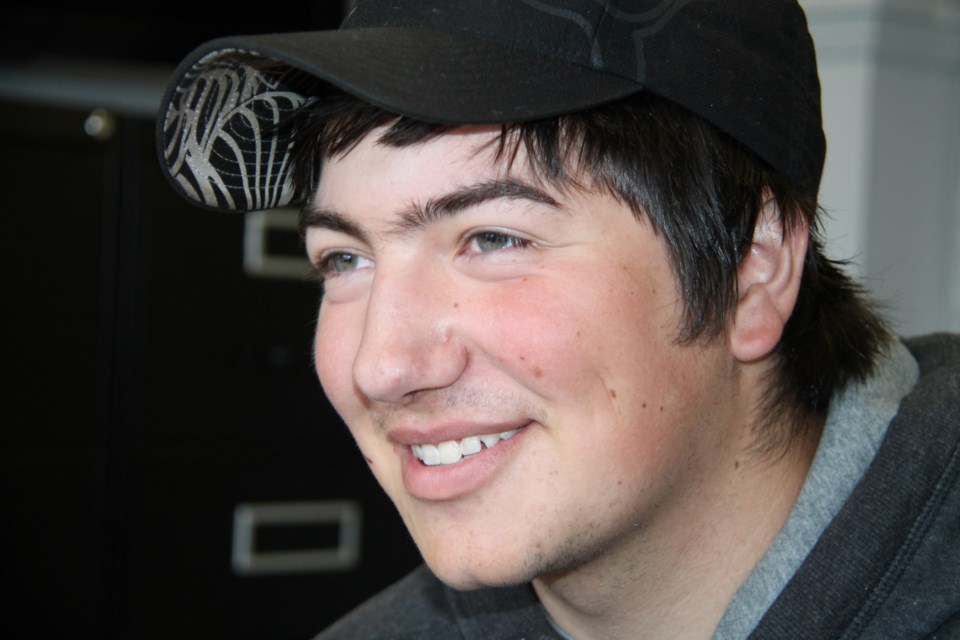 There are a lot of words that can describe the Sault's Braydon Middaugh.

The 19-year-old is easygoing, conversational, responsible, industrious and he is building his future.

Braydon first came to the Big Brother program as a 10-year-old in February 2007 and was matched with his Big Brother, Ryan Paquette, in December of that year.

As time went by, Braydon was notified, while in Grade 10 in 2013, that he met all the criteria for the CIBC Youthvision scholarship (which is available to a number of youth mentorship programs in Ontario.)

Every year, the program awards scholarships to make postsecondary education possible for youth who qualify.

"Mark (Szymberski, former Big Brothers Big Sisters of Sault Ste. Marie executive director) was a big part in setting it up, there's a lot of paperwork involved in filling it out," Braydon told SooToday.

"Two or three months later I got a call saying I got a scholarship and that I was going to fly to Toronto to be at a big conference (to officially receive his scholarship)."

Up to $38,000 in postsecondary funding was made available to Braydon through the scholarship.

He was one of only 33 youth in Ontario to receive the  CIBC scholarship support.

"I knew I wanted to work with vehicles," Braydon said.

As a result, Braydon is in Sault College's Motive Power Technician Advanced Repair program (repair of trucks and heavy equipment).

Because Braydon, through the CIBC scholarship, has access to up to $38,000 for postsecondary education, there will still be resources left to continue his education after he completes his current two-year college program.

Awarding of the scholarships is based on overall well-roundedness, including academic achievement and contributions to the community.

Braydon has certainly demonstrated all of that.

He began his own business at 10, collecting pop cans and taking them to Triple M Metal.

Triple M paid him, and Braydon gave 10 percent of the money he earned back to Big Brothers.

He hung out with other Little Brothers and Sisters on the campus for a week, created a product, a business plan and ran his business for a day in Station Mall.

There, the "Wacky Beach Wear" he and his team came up with sold out.

Always one to give back, Braydon is currently helping other young people as a counsellor at the Huron-Superior Catholic District School Board's St. Kateri outdoor learning centre.

"It's fun, the kids like it and I like hanging out with the kids, so it's a win-win," Braydon said.

Ryan Paquette, who now lives in Cornwall, Ontario, first got involved with Big Brothers in the Sault in 2003 and was matched with Braydon in 2007.

"I met Braydon and his Mom and we hit it off straight away," Paquette told SooToday.

"I learned a lot from Braydon."

"I learned kids can navigate social media in healthy ways, he valued friendships and face-to-face interactions and hands-on activities, like building forts."

"He was gathering pop cans when he was just a kid!" said Paquette, marvelling at Braydon's entrepreneurial spirit and willingness to learn about recycling.

"I said 'you're a shoo-in' (when Braydon applied for the CIBC scholarship)…I was ecstatic when he got that."

"It was great to see him grow over several years," Paquette said.

"He's a hard-working individual with a great sense of humour, he always seems to have a smile on his face."

"He's always had a really good attitude toward life."

Paquette is still a friend of Braydon and his family and hopes to visit Braydon during his next visit to the Sault.

"I was a single parent and working full-time, and Braydon (an only child) spent time with my Mom and Dad but I thought that other than my own father, there should be someone else (as a masculine figure in Braydon's life)," said Kim Middaugh, Braydon's mother.

"Ryan was really outdoorsy, we always had a great time," Braydon said.

"He enjoyed everything I did, it was a perfect match as far as I'm concerned…we went snowshoeing, hiking, canoeing, skiing, snowboarding, he was into motor vehicles and electrical things."

"He lived not too far from where I lived, so it was perfect, I could ride over there on the dirt bike."

"Ryan would come over, he was like family," Kim said.

"Whereas my Mom worked in the retail sector, Ryan filled the gap with more hands-on automotive things, in industry, he helped really pave the way into that for me," Braydon said.

"It was a good connection right off the hop."

"I think I'd still be on the same route, the same path, just maybe not as far along as I am now, I wouldn't have gotten to this point as fast (without his mother Kim, Big Brothers Big Sisters, Ryan and the CIBC scholarship)," Braydon said.

What has it all meant to Braydon's mother Kim?

"It would have been so hard to get him to college, I'm grateful they did the paperwork, because he's worth it," Kim said.

Through the Big Brothers Big Sisters program, children must be at least six years of age to be matched, and must be matched no later than their 15th birthday.

Youth can stay matched until they officially "age out" of the program on their 18th birthday, though the relationship with a Big Brother or Big Sister can, of course, last for many years, even a lifetime.

And yes, Big Brothers Big Sisters of Sault Ste. Marie are looking for more people to join the organization and help young people.

Braydon stays in contact with Paquette through social media.

"It was a really great experience…it's not really like a father figure but a really good close friend," Braydon said.

"Ryan filled a void for sure."