As Catch the Ace jackpot grows, Big Brothers Big Sisters looks to be the big winner 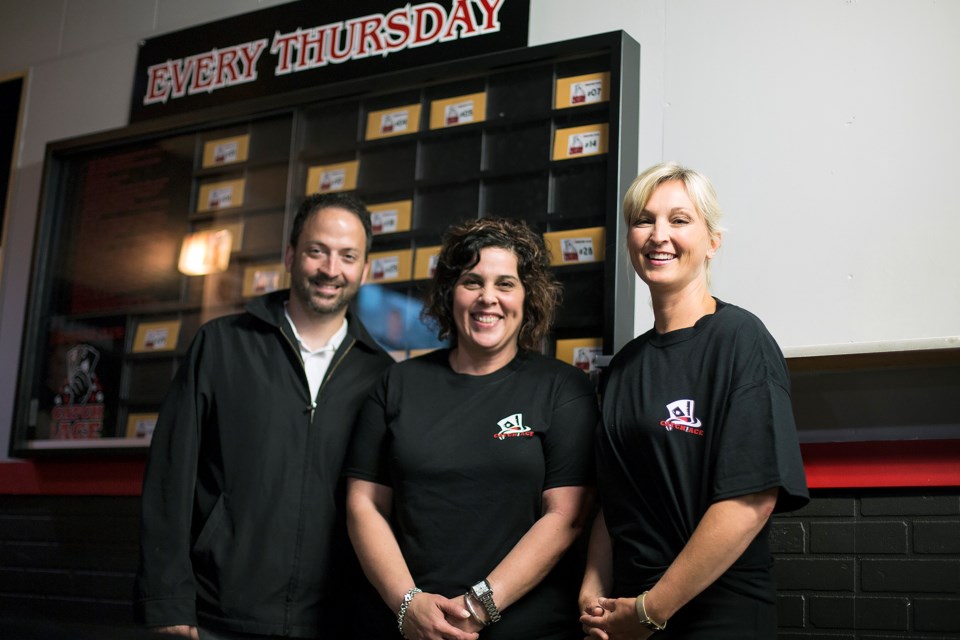 A second round of Catch the Ace is paying off for Big Brothers Big Sisters, as their take of the draw is nearing $20,000.

The Esquire Club began offering the progressive lottery as a weekly draw starting on Dec. 1, but just a few days before Christmas, the ace was drawn before momentum had started to build.

The Esquire Club owners, who have long supported Big Brothers Big Sisters, quickly applied for a second license to offer the not-for-profit organization a second chance at a bigger payout.

The second round of Catch the Ace at the Esquire Club began Jan. 16 and the interest — as well as the progressive pot — has grown every Thursday over the last 27 weeks, said club co-owner and manager Domenica Braido.

In progressive lotteries like Catch the Ace, numbered tickets are sold each week for $5 and half the proceeds go to the charity of choice — in this case Big Brothers Big Sisters.

One number is pulled from a drum and the person with that ticket wins the 20 per cent nightly draw — Braido said last week’s winner took home about $1,500.

That person then picks from one of 52 envelopes — each containing a playing card. If they pick the ace of spades they win the progressive pot as well.

“At 9:30 it is hushed because everybody wants to hear their ticket being called and then when the person goes up to the board to pick an envelope,” said Braido.

If any other card is picked, that envelope and card is removed and the game continues the following week.

“When they don’t pick the ace, there is such a rumble that explodes in here — you can probably hear it down the street because they are so excited we get to go another week,” said Braido.

Each week, the club is allowed to sell 384 tickets, but because the earliest weeks saw fewer tickets sold, they have been able to catch up by selling more tickets every week — last week about 1,500 tickets were sold.

Because they were now caught up and would only be able to sell 384 tickets per week moving forward, the club received permission to reduce the 52-week progressive lottery to just 30 weeks.

“Because we have shortened it by 22 weeks, that allows us to sell some extra tickets,” said Braido.

Between tonight and July 27, the club can now sell up to 2,300 tickets every Thursday night.

“We need to get this ace gone,” said Braido.

If the ace is not caught by July 27, tickets will be pulled that night until it is found.

“We pick a number out of the drum until somebody catches the ace,” she added.

A similar lottery in support of the Group Health Centre Trust Fund lasted 13 weeks until the ace of spades was pulled May 24 with a progressive jackpot of $9063.90.

Bolton said the Esquire Club has been supporting the organization for at least the last six years through fundraising efforts like Porketta Bingo.

“Usually it’s a donation around Christmas time, they make a charitable donation so we have some funds to help out with gifts and our Christmas party and that kind of thing,” said Bolton.

The money raised by the progressive lottery is greatly appreciated, said Bolton.

“It keeps us in business and allows us the opportunity to offer experiences and matches for the kids in our program,” she said.

Aside from the winnings the organization can expect at the end of the progressive lottery, Bolton said there has been another benefit.

“As this fundraiser gathers more steam and the public is becoming more aware of it — it’s great program awareness. So not only are we benefiting financially, we are also benefitting because more people in the city are becoming aware of our agency,” said Bolton.

“If you’re looking for something to do on a Thursday night, it’s a really good time!” she said.