When Barb needed a kidney, Dan knew what he had to do 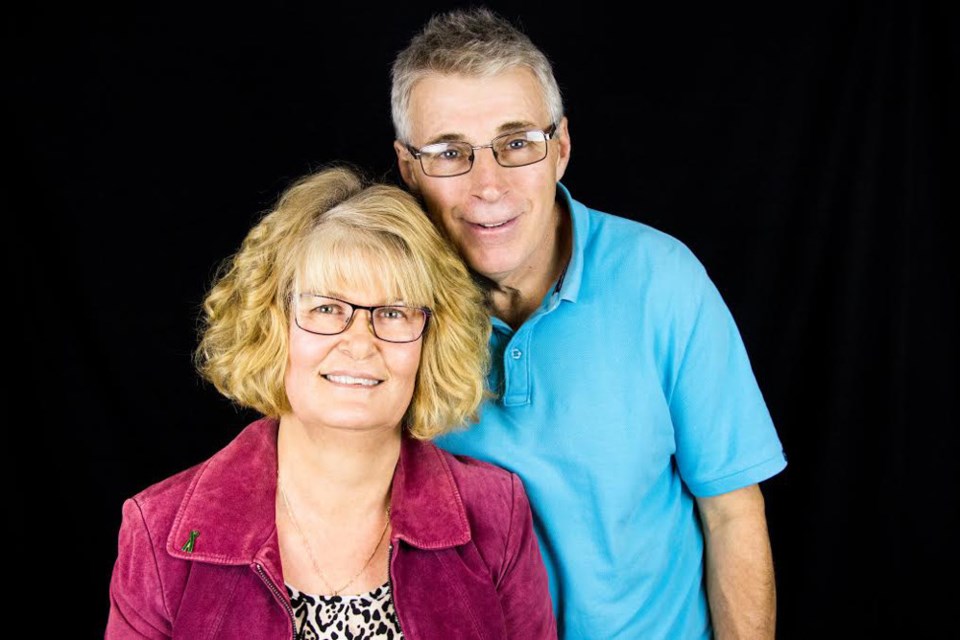 Barb and Dan Smith are enjoying life after he donated one of his kidneys to her in 2001. Photo supplied by Meaghan Kent, Nov. 6, 2016

To say Dan and Barb Smith are a close couple is an understatement.

After Barb suffered for many years with kidney disease, husband Dan stepped forward to donate one of his kidneys to Barb in a then-new kidney transplantation procedure in 2001.

15 years later, the couple, with two grown children and one grandchild, are enjoying life at their lakefront home just outside of the Sault.

Doctors first made mention of kidney trouble to Barb in 1980, and began monitoring her kidney health more closely in 1985.

“They told me ‘in about 10 years or so you’re probably going to end up on dialysis,’” Barb told SooToday.

To make matters worse, Barb was diagnosed with cancer in 1993.

Though she bravely battled cancer and survived that disease, Barb still had to begin peritoneal home dialysis treatments for kidney disease in 1997.

“I chose home dialysis and that worked for about three years, but then it started to fail, and they figured the chemotherapy I had taken for cancer had affected my body so drastically it could no longer handle dialysis.”

Barb was then forced to undergo hemodialysis treatments at hospital.

“At first I was opposed to it because I had already had cancer and didn’t want to compromise my system even more with anti-rejection drugs and proceed with a transplant,” Barb said.

“It really scared me.”

A turning point came, Barb said, when she could not recognize herself on a holiday snapshot.

“I thought I was doing so well, but my appearance had changed so much because of dialysis, and that spurred me on to go through with a transplant.”

The Smiths were informed by doctors at London Health Sciences Centre, in 2000, of a new kidney transplant procedure known as a laparoscopic donor nephrectomy, in which a kidney is transplanted from a living donor to the recipient.

The procedure is also dramatically less invasive than traditional surgical removal of a kidney from a donor, requiring only small incisions instead of one large incision.

Husband Dan then stepped in and volunteered to donate one of his kidneys to save Barb.

“When Barb went on hemodialysis (aware of the harm it was doing after she had suffered for so long with kidney disease and cancer), that’s when I told her ‘we have to do something,’” Dan said.

“As soon as the doctor said she needed dialysis I was ready to donate a kidney then.”

A great deal of testing was done, and it was found “Dan was a match, a very good match,” Barb said.

“I had a feeling from the word go I would be a match,” Dan said.

The procedure and recovery time for Dan was quick.

“I was out of the hospital in 36 hours…I told them to take me off the morphine because it was making me physically ill.”

The Smiths were back home in Sault Ste. Marie around Labour Day weekend, 2001.

Despite pain, Dan made a quick recovery, at home mowing the lawn and cutting wood.

A runner, Dan participated in a charity run in the fall and was back to work at St. Marys Paper by December 2001.

“I realized after the transplant how different and better life was after dialysis…I was no longer on a restricted fluid intake, or a restricted diet,” Barb said.

“When we were in London, after I was out of hospital, Dan and I were out walking in London, seeing the sights, I was cooking at the room where we were staying.”

“I was able to enjoy cooking again, when I was on dialysis it was just food to sustain me and keep me alive, where now I could enjoy it again.”

“They figure with my husband and I, the love connection has something to do with it (Barb’s recovery), because it’s a gift from him to me…I can’t even express what I feel about this gift he has given me.

“I never thought I’d live to see my daughters graduate from university, get married, that I’d be a grandmother…people take a lot of things for granted.”

“I feel blessed, I was so afraid when I needed a transplant,” Barb said.

After all the adversity, the couple enjoy life and have a happy, pleasant and humorous outlook.

“You can’t bury a couple of nuts too deep in the sand, we keep coming up,” Dan laughed.

The Smiths are advocates for organ and tissue donation.

“We would like people to think about organ and tissue donation,” Barb said, mentioning that over 1,600 people in Ontario are currently waiting for an organ transplant.

Barb said statistics show 80 per cent of Ontarians are in favour of donating an organ, but most fail to follow through by not making their wishes known by providing written consent when renewing their drivers licenses, or by taking a few minutes to register for organ and tissue donation online.

“If I can inspire one person make that decision to sign an organ donor card, and encourage them to make their wishes known, and help somebody who needs an organ, it’s wonderful to put that fear out of somebody’s mind,” Barb said.

“Organ and tissue donation not only saves lives, it saves families.”