More than 100 artists from across the globe came together in Lethbridge over the weekend for the 12 th annual Windy City Tattoo Show . “We definitely try to bring in different artists from all over the world,” organizer Ash Woods said.
Sep 14, 2019 8:29 PM By: Global News 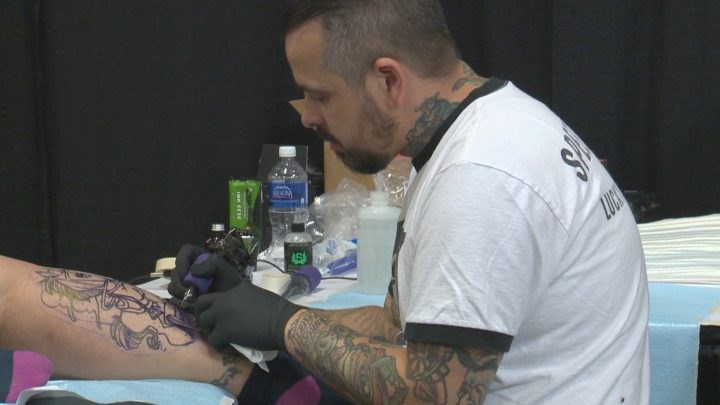 More than 100 artists from across the globe came together in Lethbridge over the weekend for the 12th annual Windy City Tattoo Show.

“We definitely try to bring in different artists from all over the world,” organizer Ash Woods said.

“We have artists from Florida, Italy and all over Canada. We just try to give everybody an idea of what is out there.”

One ink master at the event gained quite the recognition on a world stage.

Jime Litwalk, a tattoo artist originally from Detroit, Mich., has spent the last few years on the road and in the public eye.

Litwalk is gearing up to make his appearance in the final of the reality TV show Ink Master on Tuesday in Las Vegas.

This will be Litwalk’s third time competing on the show, but he said no matter the outcome, he’s happy to be doing what he loves.

“I just love the art of it, so I’m just happy about that part,” he said.

“I’ll just go out there and make a tattoo and they’ll judge it. At the end of the day, I’ll go home and continue to do everything that I do in life.”

Although he has a busy week ahead, Litwalk said bringing his skills to a new audience by traveling to these shows is something he always looks forward to.

“Doing this, you meet and you interact with different walks of life and a different variety of people in different parts of the world and different cultures,” he continued.

“Tattooing combines all those things together. It has kind of like this artistic bridge that binds everybody.”

Litwalk, 44, said his love for ink began when he was in high school.

Now, 27 years later, he said he’s just as in love with the industry as he was when he began.

“The more I indulged myself in and dove into the tattoo world and learned more about it, I became more fascinated,” he said.

“Honestly I think it’s the best job there is. All my friends and everything I have in my life, I owe to tattooing.”

Litwalk wasn’t the only tattoo artist at the event with world recognition. Woods said with each passing year the show continues to grow, bringing more world-class talent like Litwalk to Lethbridge’s doorstep.