A searing report from Canada’s military into Ontario’s troubled long-term-care system where over 1,600 people have died from COVID-19 put a spotlight on the for-profit companies managing some of these facilities.
May 29, 2020 6:23 AM By: Global News 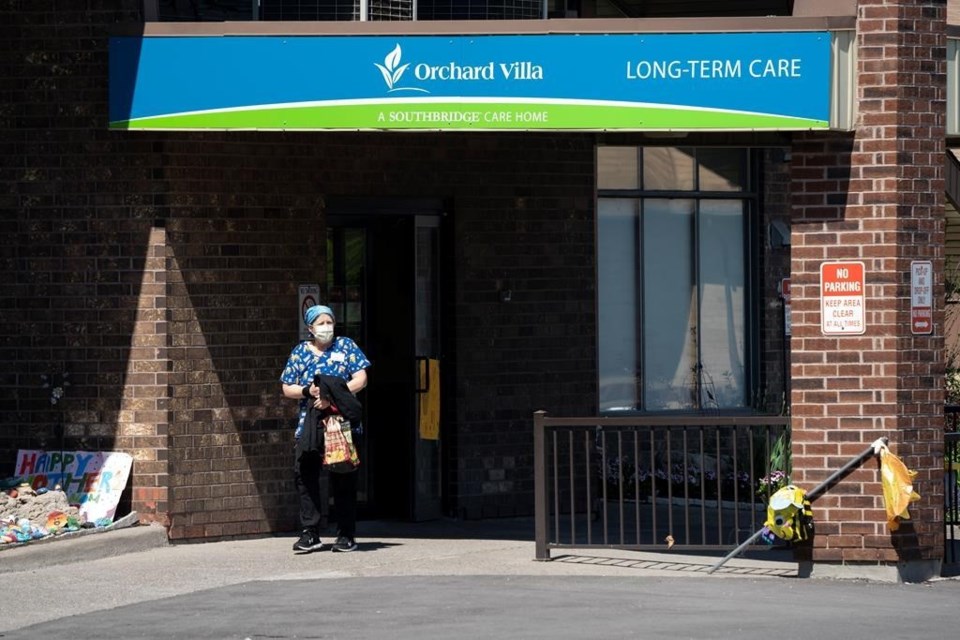 A searing report from Canada’s military into Ontario’s troubled long-term-care system where over 1,600 people have died from COVID-19 put a spotlight on the for-profit companies managing some of these facilities.

New data from the Ontario Health Coalition shows 1,629 residents have died at long term care and retirement residents and 10 staff have died as of May 19.

Here is a closer look at the companies behind the five troubled facilities.

Altamont Care Community, located in Scarborough, where 52 people have died from COVID-19 is owned by Sienna Senior Living, among the largest for-profit long-term care providers in Canada.

In a military report, Brig. Gen. Conrad Mialkowski alleged most residents at Alatamont were not getting three meals a day due to “significant staffing issues” and that there was “poor nutritional status due to underfeeding.”

Coronavirus outbreak: Nothing is off the table in solving long-term care home crisis, Trudeau says

Coronavirus outbreak: Nothing is off the table in solving long-term care home crisis, Trudeau says

Military personnel also reported that residents had pressure ulcers due to prolonged bed rest, in some cases for weeks.

“No evidence of residents being moved to wheelchair for parts of day, repositioned in bed, or washed properly,” the report read.

The company declined to answer questions about its financial reports but said it was working to make sure the issues identified by the Canadian Forces “are all dealt with immediately and permanently.”

“To deliver the level of care that our seniors deserve, the staffing challenges we face in the long-term care sector must be addressed,” the company said in a statement. “We are committed to working with the government, and our health system partners, to solve this urgent issue.

“As the report notes, we have already increased staffing levels and flattened the infection curve.”

Orhard Villa, a 308-bed facility in Pickering, is owned by Southbridge Care Homes and has been clobbered by the pandemic, with 77 deaths and at least 96 staff and 225 residents testing positive for novel coronavirus.

Families have called for a police investigation into Orchard Villa, and have alleged neglect, malnourishment and failure to adhere to infection prevention protocols.

Southbridge owns 37 long term care homes across the province, including  Country Village Homes near Windsor, where there have been 18 deaths, also operates Pinecrest Nursing Home in Bobcaygeon, Ont, where 28 residents died from COVID-19. Southbridge is limited partnership and doesn’t disclose its financial reports.

Orchard Villa is managed by Extendicare, which owns or runs more than 110 homes and retirement residences across the country.

Southbridge and Extendicare did not respond to requests for comment.

A $40-million proposed class-action suit was filed against Orchard Villa this week alleging negligence. The home has not yet responded to the civil action, filed in the Ontario court.

Military personnel reported seeing “cockroaches and flies at the Pickering facility, while patients were “left in beds soiled in diapers.”

June Bendell died at Orchard Villa three weeks ago, after she choked while she was being fed a nutritional drink.

Her children were told the death was deemed accidental, but said they were surprised to hear what appeared to be a different version of events from the Canadian Armed Forces.

“Now we heard she was lying on her back, and they recognized it as being an issue. And it is an issue,” Fred Bendell told Global News in an interview.

“She was handled poorly.”

June Bendell (right) and her husband Harry would visit nursing homes every Christmas dressed as Mr. and Mrs. Claus.

Military personnel sent to Orchard Villa to control a COVID-19 outbreak had found that staff were not always sitting residents upright before feeding them, according to the military report released Tuesday.

The report also alleged the high-risk practice may have contributed to the death of a resident who had choked when a nursing home worker fed her “while supine.”

North York’s Hawthorne Place Care Centre, the scene of 39 deaths, and Eatonville Care Centre in Etobicoke, where 46 people died, are operated by Rykka Care Centres, an operating partner of Responsive Management Inc., based in Markham, Ont.

At Hawthorne nursing home, the military alleged numerous instances of apparent patient neglect and that “little to no disinfection” had been conducted amid the COVID-19 pandemic.

CAF members noted an infestation of ants and cockroaches and that some staff “delayed changing soiled residents leading to skin breakdown.”  Worker were also “afraid for their jobs” and not enough personal protective equipment to keep staff safe, the report said.

Meanwhile, at Eatonville Care Centre in Etobicoke, the military said residents who tested positive for COVID-19 were allowed to wander the facility, putting everyone “at risk of being exposed” and passing the virus “throughout the home.”

He said there was “general culture of fear” at the home among personal support workers who were worried about using costly supplies like wipes, gloves and dressing gowns.

There were also allegations about the reuse of hypodermoclysis supplies, including catheters, even after their sterility had been compromised, the report said.

“Most of the homes that we manage have been successful at keeping COVID-19 at bay,” said Linda Calabrese, vice-president of operations with Responsive Management Inc.

“We will not rest until our residents and their families have confidence that residents are getting the best care possible. When complete, we will share this review with the Government of Ontario, the Government and Canada and the Canadian Armed Forces.”

Holland Christian Homes, which runs Grace Manor where 11 people have died, is the only not-for-profit home amongst the five listed in the report.

The military alleged staff there moved from a COVID-19-positive unit to other units without changing protective gear, wearing the same pairs of gloves as they moved between patients and not washing their hands often enough.

They also flagged leaving food in a patient’s mouth while the person was sleeping, “aggressively repositioning a resident,” and not assisting residents during meals, noting that in some cases, staff would rather write that the resident had refused the meal than help them eat.

Ken Rawlins, CEO of Holland Christian, said the situation at the home has stabilized and the military feels it can redeploy elsewhere.

“Like others, including our political leaders, we were shocked and dismayed at some of the conditions identified in this report,” he said.

“It is our goal, as it is of all involved, to ensure the highest standards of care and treatment of all residents entrusted to our care by their families.

Ontario Premier Doug Ford said Holland Christian has since made changes and will not be taken over following the release of the military report, but will still receive provincial inspections.

Ford said the province is dispatching six teams of two inspectors to each of the five homes.

“We need boots on the ground. I want eyes and ears in the homes that we’re most worried about keeping close watch,” he said.

Saskatoon business boycotted after owner’s Facebook comments on BLM protests
Jul 13, 2020 2:57 PM
Comments
We welcome your feedback and encourage you to share your thoughts. We ask that you be respectful of others and their points of view, refrain from personal attacks and stay on topic. To learn about our commenting policies and how we moderate, please read our Community Guidelines.