A Toronto-based anti-mask activist was arrested at the Moncton airport as he arrived to host an anti-mask event that was scheduled for Saturday. New Brunswick RCMP have confirmed that a 37-year-old man from King City, Ont.
Oct 11, 2020 11:16 AM By: Global News 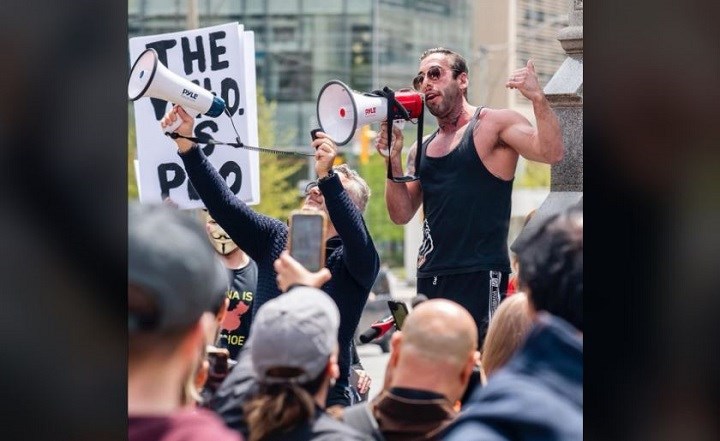 A Toronto-based anti-mask activist was arrested at the Moncton airport as he arrived to host an anti-mask event that was scheduled for Saturday.

New Brunswick RCMP have confirmed that a 37-year-old man from King City, Ont., was arrested on Friday after they responded to reports of a disturbance at Greater Moncton Roméo LeBlanc International Airport.

They would not confirm the man’s identity. However, the details match up with a video posted online by Chris Saccoccia, a Toronto-based anti-mask activist who also goes by Chris Sky.

A video posted and shared by Saccoccia on Facebook shows him in a verbal exchange with a WestJet flight attendant.

An RCMP officer is then shown arriving inside the aircraft and telling Saccoccia he is under arrest for causing a disturbance.

He is then escorted off the plane.

New Brunswick RCMP say Saccoccia was arrested before being released on a condition to appear for a court appearance on Jan. 25.

Once Saccoccia was released police escorted him back to the airport where he flew out of the Atlantic region.

The man and his wife, 34-year-old Jennifer Saccoccia, were set to host an anti-mask event in Moncton on Saturday.

Dozens attended the event, which urged residents to not follow a mandatory masking order that was put in place in New Brunswick on Friday.

This is despite the medical consensus from Health Canada and the World Health Organization that wearing a non-medical mask or face covering can “reduce the spread” of infectious respiratory droplets.

New Brunswick implemented the masking order — which requires the use of masks in most indoor public places — on Friday in response to a rising number of coronavirus cases in the province.

Earlier this week, both Sccoccias were charged with violating the federal Quarantine Act.

Police said both were ordered to quarantine for 14 days when they returned to Toronto after travelling abroad.

But on Oct. 3, police said the man and the woman were seen at a 500-person, anti-mask rally at Yonge-Dundas Square in Toronto.

— With files from Global News Karla Renic and Jessica Patton