Ontario’s Landlord and Tenant Board is set to begin processing thousands of eviction applications Tuesday, as pressure from tenant advocacy groups to try and extend a ban on evictions continues to mount amid the COVID-19 pandemic.
Aug 4, 2020 7:05 AM By: Global News 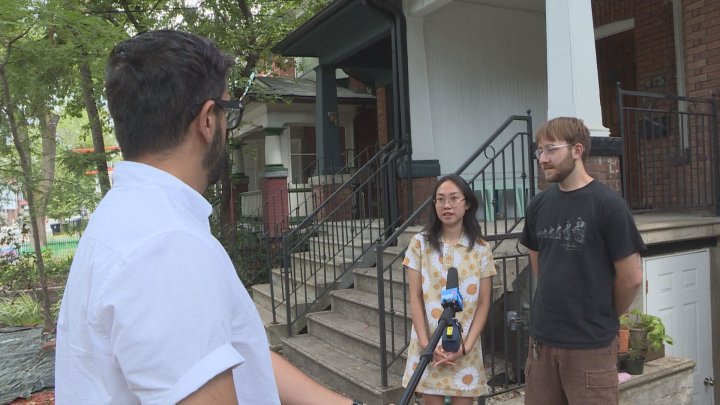 Ontario’s Landlord and Tenant Board is set to begin processing thousands of eviction applications Tuesday, as pressure from tenant advocacy groups to try and extend a ban on evictions continues to mount amid the COVID-19 pandemic.

“This week we are looking at a situation where the enforcement of outstanding eviction orders and the making of new eviction orders by the Landlord and Tenant Board can continue,” said Cole Webber, a legal worker with Parkdale Community Legal Services.

The province ended its moratorium on residential evictions in late July — after it lifted its state of emergency.

Due to August beginning during a long weekend, the board will begin working through its backlog of pending eviction orders starting this week.

“Tens of thousands of people in Toronto face the threat of eviction this month,” added Webber.

“We know that there are thousands of outstanding eviction orders which will begin being processed… and more than six-thousand eviction applications that landlords during the shutdown alone.”

One of those cases that the board will likely have to process is between The Annex residents, MaryAnn Icaro and Christopher Loose, and their landlord, Cina Marques.

“It’s been a pretty stressful situation, a roller coaster of emotions,” said Icaro.

“It’s no coincidence that she served these two eviction notices recently… it’s clear that she intends to evict us because the eviction moratorium has been lifted.”

Icaro and Loose both said they were financially impacted by the COVID-19 pandemic, but their landlord would not provide any temporary rent relief when they asked for it.

“We realized our only option was to connect with the other tenants of our neighbourhood and see who else was dealing with the struggle and see how we could support each other together,” added Icaro.

“We had sent a collective letter on May 1 and that was immediately met with an N7 eviction notice.”

An eviction letter obtained by Global News cites more than a dozen instances, including “putting up posters on the premises” and “meetings you have been hosting on the property”‘ related to the couple’s newly formed tenants advocacy group.

MaryAnn Icaro and Christopher Loose are facing eviction for the second time since the COVID-19 pandemic began.

Icaro and Loose claim their landlord, Marques, eventually dropped the first notice but they were hit once again by a second eviction letter.

The new eviction notice alleges instances of pulling out plants from the garden and eating them and keeping personal belongings in the garage, among other claims.

“We’re not doing anything illegal inside of our apartment,” said Loose.

“We’ve kind of realized that this is being used as an intimidation tactic rather than something that’s actionable.”

In a text message to Global News, their landlord Marques claims that “this situation that involves me as a landlord and my basement tenants is not based on this [mass evictions]. This is a matter that is now before the LTB [Landlord and Tenant Board] and I will not entertain any further comment on this matter.”

Former adjudicator with Ontario’s Landlord and Tenant Board, Harry Fine, said a group called the Advocacy Centre for Tenants Ontario [ACTO] had filed a notice of motion to try and extend the temporary ban on evictions — but that it was dismissed by a justice over the August long weekend.

“Now the sheriff [enforcement officer] can go ahead with enforcing the evictions that have been on hold,” said Fine.

“The Landlord and Tenant Board can also begin issuing piles of eviction orders that were waiting to go out and the [board] is now going to start hearings for evictions, things that haven’t yet been heard.”

The Advocacy Centre for Tenants Ontario could not be reached Monday for comment on its efforts to extend the eviction moratorium.

Meanwhile, Fine adds that he believes some leniency from the board related to matters of tenants who have been financially impacted by the COVID-19 pandemic, including providing a long-term repayment plan for missed rent.

“If a tenant says, ‘I couldn’t pay but I’m getting back on my feet and I’m working again and I can start paying rent — but it will take me a year to pay back what I owe,’ the adjudicator will normally grant them a payment plan and if they make the payment plan, there’s no eviction,” said Fine.