Think you have everything? How about a $90K space pen?

What’s the difference between a regular Bic-style pen and the space pen built by Kelowna artist Mervin Mascarenhas? For one thing, there’s a price tag difference of approximately $90,000.
Jan 29, 2019 6:37 AM By: Global News 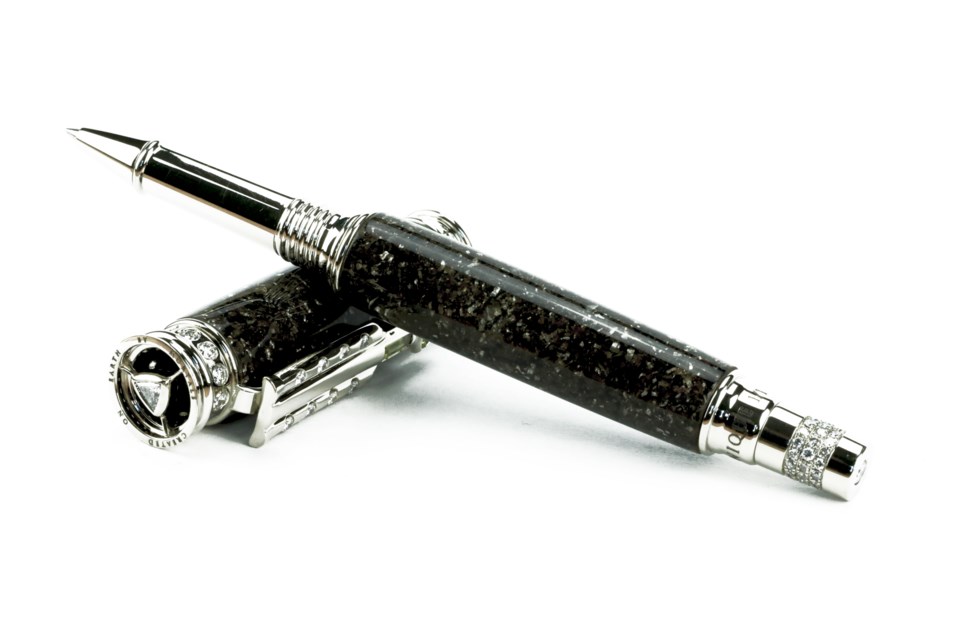 What’s the difference between a regular Bic-style pen and the space pen built by Kelowna artist Mervin Mascarenhas?

For one thing, there’s a price tag difference of approximately $90,000.

And, of course, the space pen is literally made from out-of-this-world material.

“These are fragments of a four-million year old Gibeon meteorite from space and it’s brushed with some moon dust in it. Real lunar dust from the moon,” said Mascarenhas. “These are gemstones from space. It’s solid 18-karat gold and it’s dressed with diamonds.”

The rim is etched with the engraving ‘created on earth by mortals,’ demonstrating Mascarenhas’ sense of humour.

The artist fell in love with crafting pens almost a decade ago while he was residing in Bermuda.

“I wasn’t thinking about a business. I just wanted to make something cool with my hands,” Mascarenhas said. “And slowly friends started paying me money and requested me to make pens for them. In the last four years, it became a full-fledged business.”

Each material is chosen carefully. Wood pieces found in lakes and oceans — hundreds to thousands of years old — each telling a story.

The pen maker has grand plans for his business.

“My dream and goal is to eventually open up my own store and make the most beautiful pens in the world,” Mascarenhas said.

From ancient 50,000-year-old wood from New Zealand to a pen made from Ukrainian bog oak that was found eight meters under water, Mascarenhas uses materials that are unique and hard to source.

“Anything made out of Bermuda Cedar is a collector’s item,” Mascarenhas said. “You cannot buy this wood online.”

But most unique is Mascarenhas’ unearthly space pen — a labour of love.

“I worked about a year on the design and four months making it, so it is one-of-a-kind,” Mascarenhas said. “There won’t be another duplicate on the planet.”

So how exactly does a pen maker market a $90,000 writing utensil?

“I don’t underestimate anyone. There’s deep pockets in Canada and around the world,” Mascarenhas said. “The right buyer will come along.”

As for where he found the rare meteorite, moon dust and space gems, Mascarenhas is keeping his lips sealed.

“I have my sources. I have all the legal documents to the buyer who comes along,” Mascarenhas said. “Everything has been stamped, sealed, and even the gemstones have been certified. It says they’re extra-terrestrial.”

If you have a special piece of wood, Mascarenhas Luxury Creations also offers one-of-a-kind keepsakes that are custom-made for each client.

“I do this with passion and I don’t want to be doing what everyone else does in the market.”

One suspect at large after car chase ends in spectacular crash in Montreal’s east end
Aug 12, 2020 8:09 AM

Leader of the Ontario Liberal Party to make remarks on back to school plans in London
Aug 12, 2020 7:28 AM

Man shot and killed outside apartment building in Scarborough
Aug 12, 2020 7:13 AM