Sentencing has been postponed for the Halifax police officer who punched a homeless man outside a shelter last year.
0
Nov 22, 2019 7:04 PM By: Global News 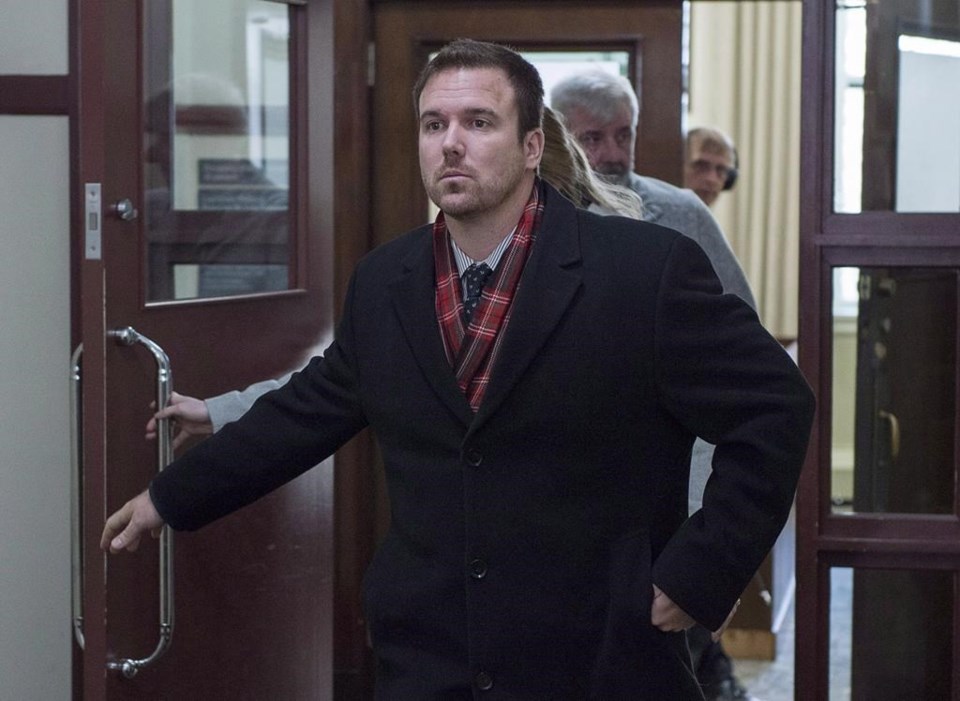 Sentencing has been postponed for the Halifax police officer who punched a homeless man outside a shelter last year.

Constable Gary Basso, 39, was convicted of assault causing bodily harm in June after he struck Patrice Simard in the face, in the parking lot of the Metro Turning Point on Feb. 25, 2018.

Sentencing was delayed as Crown and defense attorneys reached a last-minute resolution on a hearing, which meant Justice Laurie Halfpenny-MacQuarrie didn’t receive required documents in time for the Friday court date.

“This is a significant trial and sentencing, it’s significant for everyone,” Halfpenny-MacQuarrie said in Halifax Provincial Court, encouraging lawyers to take the required time to make final their submissions.

Simard, who was intoxicated at the time of the assault, required medical attention after the incident and was eventually treated for a broken nose. The incident is captured on a troubling, 17-minute security tape from the shelter.

A photo of Patrice Simard taken shortly after his arrest on Feb. 25, 2018, depicts an injury to his left eye. Photo courtesy of the Nova Scotia Serious Incident Response Team

Crown attorney Sylvia Domaradzki is seeking a sentence that includes six to nine months of jail time, a 10-year firearms prohibition and a sample of Basso’s DNA for the provincial databank.

In final submissions, she told the court that Basso has a record of discipline within the police force, and when combined with inconsistencies and omissions in his notes from the incident, disqualify the assault as a “momentary lapse in judgement.”

She urged Halfpenny-MacQuarrie to consider that in her sentencing, along with the psychological and physical trauma suffered by Simard.

“The public needs to have faith that when an individual who is a police officer commits a crime, and then subsequently as was found in this case, tries to cover his or her tracks, there’s going to be significant consequences,” Domaradzki told reporters outside the courtroom.

“The public needs to have faith that the court will listen to that and administer an appropriate sentence.”

Defence lawyer James Giacomantonio, who declined comment after submissions, said Basso has already suffered from the publicity and “de-personalization” of the trial so far. Eighteen letters of support from police colleagues, friends and family describe him as a hard-working, dedicated and decorated police officer.

“These actions, which I believe are fairly characterized as momentary lapses in judgement, and a moment in which he did not folllow the law he was sworn to uphold, should not cost him everything today,” Giacomantonio told the justice.

“Constable Basso is here before the court asking to be dealt with fairly as a human being who made a mistake.”

Basso’s lawyer is seeking a conditional discharge from the court, which means he would not receive a criminal record provided he meets conditions set by the judge, such as community service or anger management. That sentence is in the public interest, Giacomantonio argued, because it affords Basso a chance at keeping his job, so he could continue serving the public as a committed officer and engaged community member.

His fate at the police force, which could include dismissal under the Nova Scotia Police Act, will be determined after sentencing by a police review board.

Mitigating factors for Cst Basso: no criminal record. Aggravating: the victim’s particular vulnerability as a homeless and intoxicated person, the fact that the victim did not strik the first blow, or any blows, and Basso’s record of discipline within the police force.

The February 2018 assault is not the first mark on Basso’s record at the Halifax Regional Police force, where he has worked for more than a decade.

According to an agreed statement of facts presented in court on Friday, Basso was charged in May 2009 with “acting in a disorderly manner or in a manner that is reasonably likely to bring discredit to the reputation of the police department,” for an intimate relationship he engaged in with someone he met while on duty.

That individual was a known associate of criminals, and the relationship was both observed by the criminal element and maintained with use of an HRP-issued cell phone.

The same kind of charges were brought again in 2015, and an additional charge of “neglecting to, or without adequate reason, failing to promptly, properly or diligently perform a duty as a member.” Those charges relate an illegal search of a residence that was not recorded into the police system, and a missing quantity of “cutting agent” from the police locker that Basso later gave to a “coded source.”

Basso was also charged criminally for that matter, but those were stayed by the Crown in May 2017. He was later sanctioned under the Police Act with a 10-day suspension of pay for providing property that was scheduled for destruction to a confidential information in lieu of pay, and failing to document that.

While Basso declined to address the court after final submissions were made, a letter he submitted to the judge reads, in part, “… I would like you to know that I wish that it never happened.” He referred to striking Simard outside the Metro Turning Point.

“I don’t wish that it never happened because I was charged, but because it is an unfortunate event anytime a police officer needs to use force.”

The letter outlines numerous traumatic and violent experiences Basso has had as a police officer, adding context a comment he made during his testimony – “It was a non-event to me.”

“I realized you that you took this as me being very cavalier about a serious situation,” he wrote to the judge. “… My way of dealing with things for my own mental health is to move on from them, once a call is over it becomes insignificant to me… I believe a lot of police officers would understand.”

The letter describes his continued willingness to put himself in harm’s way as a police officer because he “love(s) serving” his community, and his fear of “losing a career that (he) love(s)” as a result of having a criminal record.

“There aren’t many professions where you can make a split-second decision that can not only risk your safety, career and your lively hood, but can also ruin your life in the blink of an eye, (sic)… This is where I sit.”

Basso’s sentencing for the February 2018 assault has been scheduled for Jan. 31.