Less than six years after it was built, a section of the South Fraser Perimeter Road in Delta is sinking.
0
Aug 24, 2019 8:47 PM By: Global News 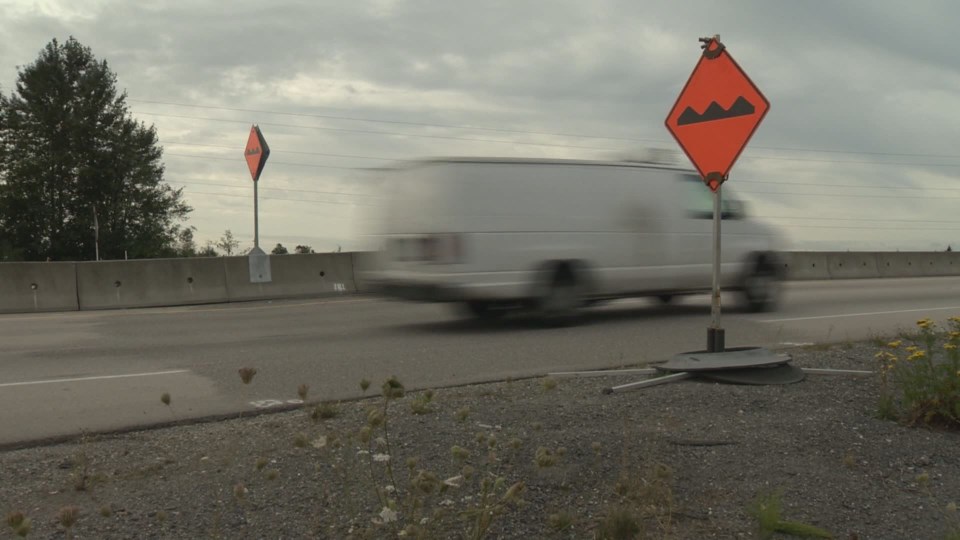 Less than six years after it was built, a section of the South Fraser Perimeter Road in Delta is sinking.

Now the Ministry of Transportation is spending more than $3 million to repair the Highway 17 stretch, which was built over an old landfill and has formed what drivers are calling “garbage bumps.”

The mounds were formed as the section west of 96 Street and the Alex Fraser Bridge slowly contorted and sunk, making it dangerous to drive at the posted speed limit of 80 kilometres per hour.

“It’s pretty ridiculous,” said one driver who didn’t want his name used. “I just have to take it easy so I don’t scratch the bottom. The kids think it’s fun, but it’s not really for the vehicles.”

The troubling stretch sits in the Delta South riding overseen by NDP MLA Ravi Kahlon, who admits the bumps are a problem.

“The bumps are pretty scary,” he said. “People who commute through this area, people who live in this area … they know it’s not a small little bump. When you hit that thing, you’re getting off the ground quite high.”

Despite that paving work, the road has continued to sink. Signs were later installed in April advising people about the bumps.

Now Kahlon says another $3 million will have to be spent over the next five years to continue that paving work annually, while the ministry look towards a more permanent solution.

“This is proof that you can’t just pave over your mistakes,” he said. “There should have been no surprises, given the history of the land, that something more needed to be done. Now we’re paying for it.”

The four-lane South Fraser Perimeter Road opened in December 2013, connecting Highway 1 to the Tsawwassen Ferry Terminal and cutting commute time between the two in half.

The road, which cost $1.26 billion to build, was constructed over Burns Bog and the former Delta Shake and Shingle landfill site. The dump caught fire in the 1990s and created a hazardous mess that cost millions to clean and prompted a local state of emergency.

The ministry said in its statement that some of the sinking, which it calls “post-construction settlement,” was anticipated due to geotechnical challenges with the soft soil composition at the landfill site.

The road was built to mitigate those issues “as much as possible,” the ministry added.

“We expect the area to continue slowly settling for another three to five years, and once it is stabilized then staff can establish a permanent solution,” the statement reads, adding the cost of that solution will be determined after it is designed.

Kahlon is pinning the blame for the bumps squarely at the B.C. Liberals, whose government oversaw and approved the South Fraser Perimeter Road project.

He says that government should have properly pre-loaded the ground, which would have ensured it was prepared to handle the weight of the road and subsequent traffic.

“Here in my community, we call them the ‘B.C. Liberal garbage bumps,'” he said. “I think the previous government had some cost overruns and said, ‘listen, let someone else deal with it, it’s somebody else’s problem.’

“We can’t seem to get answers from anybody on what their rationale was for not building this properly.”

Liberal MLA for Richmond-Queensborough Jas Johal says the highway has proven itself to be popular and successful in cutting down commuting time, and any issues will be taken care of.

“There’s always challenges creating infrastructure projects, whether it’s in the North or the Interior or the Lower Mainland,” he said. “Problems do come up, but guess what? We can deal with those small problems and still move people.”

Johal says the previous government took the advice given to them by staff at the time, and rejected attempts to lay the issue of the bumps at the Liberals’ feet.

READ MORE: Why do trucks hit overpasses? Because B.C. drivers aren’t trained not to: trucking association

“We built the Sea to Sky Highway, we built the Canada Line, we built the Port Mann Bridge — those are all major projects,” he said. “I’m not sure one roadway going to Highway 1 is going to be such a challenge to get fixed.”

Until the bumps are fixed for good, the ministry advises drivers not to travel above the posted speed limit and be mindful of the road.

But Kahlon says drivers and their safety will continue to be impacted.

“I’m worried about people who are driving big trucks who haven’t gone through here before,” he said. “I’m worried about tourists coming off the ferries who don’t know it’s that big of a bump. It’s concerning.”

—With files from Ted Field

2020 Penticton Vees playoff profile
Feb 27, 2020 7:27 PM
Comments
We welcome your feedback and encourage you to share your thoughts on this story. We ask that you be respectful of others and their points of view, refrain from personal attacks and stay on topic. To learn about our commenting policies and how we moderate, please read our Community Guidelines.