Regina Police Chief Evan Bray is defending decisions his service has made throughout the Co-op Refinery lockout.
Feb 14, 2020 3:16 PM By: Global News 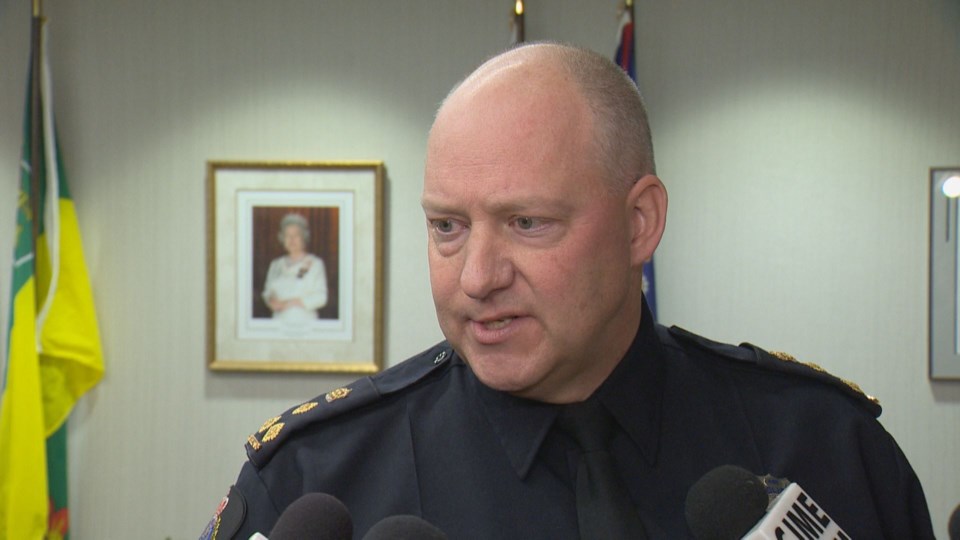 Regina Police Chief Evan Bray is defending decisions his service has made throughout the Co-op Refinery lockout.

Bray made himself available to media on Day 71 of the labour dispute to field questions from reporters regarding arrests made on the picket line and claims that the police service is bought by Federated Co-operatives Ltd. (FCL).

“We are not paid by Co-op, we have not been paid by anyone except the taxpayers of this city,” Bray said.

The Regina Police Service has dealt with a lot of defiance from the community since refinery workers were locked out by FCL on Dec. 5.

“I can’t remember a time that’s been more challenging than this,” Bray said.

“No matter who lobs the worst most barb-filled complaint, I will continue to guarantee them respect and professional from this service.”

And he’s had plenty of opposition.

John Gormley has called for his resignation and Bray’s face even appeared as a hood ornament on a fuel truck.

Officers within the service have also faced negative and inciteful comments.

“That hurts because we take a lot of pride in building these [community] relationships,” Bray said.

The Regina Police Service faced criticism from both sides. Those supporting FCL have demanded police make more arrests due to the illegal blockades. Supporters of Unifor Local 594 claim the service is being bought and that their use of force was unnecessary.

“There are two very distinct sides. People get emotional, they’re frustrated with our response or lack of response,” Bray said.

“I feel like society today wants that show. We want to be able to click the link and watch what happens. If they see the law is broken they want to see us out there.”

Bray defended the service’s decision to arrest 14 people including Unifor national president Jerry Dias on Jan. 20. He said they were arrested as they were aiding in the blockade or directing the blockade around the Co-op Refinery Complex.

“We were able to get some vehicles off the railroad tracks which we thought was — that’s borderline terrorist work when you’re doing stuff like that,” Bray said.

“You don’t throw vehicles on railway tracks in front of a fuel refinery without understanding there could be some serious consequences.”

The service chose not to make similar arrests in the following weeks as they were worried police would make “the front page news for the wrong reasons.”

“The blockade, yes, is breaking the law, but we’re responsible to our conscious. Going in and de-escalating a situation for no purpose other than to give someone a show on Twitter is not the right thing to do.”

Instead, the RPS said it chose to tactically block off Ninth Avenue North which allowed them to remove the barricade around the refinery while letting fuel trucks through. Police eventually re-opened the road to picketers once all materials used to make the blockades were removed. The road is now open to the public.

Bray said tensions are starting to ease. He said his officers have struck a balance where they can have coffee with picketers while maintaining “very good conversations” with Co-op management.

“People are hopefully looking at this mediation process as a glimmer of light that needs to get us where we need to go.”