High school teachers and education workers represented by Ontario Secondary School Teachers’ Federation (OSSTF) at nine public school boards are participating in a second one-day strike as contract talks between their union and the provincial g
Dec 11, 2019 12:00 AM By: Global News 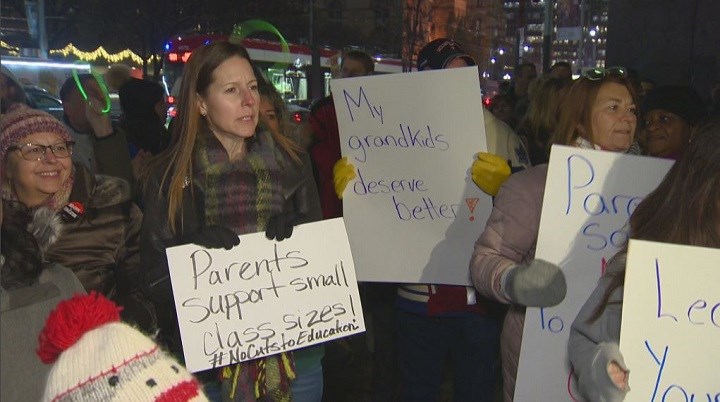 As of midnight on Wednesday, OSSTF-represented workers engaged in a full withdrawal of services at the following school boards:

Harvey Bischof, president of OSSTF, said the union and the government have not held contract talks since last week. He said the strike could not be avoided despite Education Minister Stephen Lecce’s pleas to call it off and enter into third-party mediation with the government.

“We have a government that hasn’t said they want to meet us at the table,” he said, adding the union hasn’t heard anything back on proposed mediation dates.

Bischof accused Lecce of ratcheting up rhetoric around the talks instead of engaging in constructive bargaining.

On Tuesday afternoon, Lecce said meeting all the union’s compensation and class-size demands and applying those same terms to other education unions, would cost the province $7 billion over three years.

Lecce said bowing to the OSSTF’s demands may leave the government with no other choice but to offer the same terms to other education labour groups.

“They choose not to consider the impacts outside of OSSTF as if they live in isolation to the other unions and education workers, but they don’t,” he said.

Meanwhile, it was announced on Tuesday that the provincial government reached a tentative agreement with the Educational Workers’ Alliance of Ontario — one of several unions currently in labour negotiations with the government.

Wednesday’s job action comes exactly a week after OSSTF engaged in a province-wide walkout. It’s been part of an effort to turn up the pressure during tense labour negotiations with the Progressive Conservative government.

The union hasn’t had a contract in place since August.

Sources familiar with the negotiating positions of the Ontario government and the OSSTF, but not authorized to speak publicly, previously told Global News issues surrounding compensation, class sizes, e-learning and layoffs have been major points of contention at the bargaining table.

Bischof said the union knows Wednesday’s pending disruption will impact students and parents, but said teachers have no choice but to push back against increases in class sizes and mandatory e-learning courses.

“If we step back and allow this government to simply erode the quality of education, the long-term consequences of that will be disastrous,” he said.

Lecce said the main issue in the talks is compensation, with the government recently passing legislation to cap annual wage increases for all public sector workers at one per cent for three years.

The union is asking for inflationary increases, which would amount to about two per cent — something it argued would cost $200 million.

School boards officials were posting updates on their websites about how strike action was impacting operations.

— With files from The Canadian Press and Ryan Rocca

As a tentative agreement has not yet been reached, OSSTF (secondary teachers & education workers) is proceeding with the previously announced one-day walkout for Wednesday, December 11. As a result, TDSB secondary schools are closed to students. https://t.co/jMrxZFuDnG pic.twitter.com/m34kPjDuxj

Just a reminder that schools will be closed to students on Wednesday, December 11, 2019 if no agreement is reached between the Province and OSSTF. For all BHNCDSB 'Labour Updates', please refer to messages from our Chair of the Board – https://t.co/DO1Z4jolpP https://t.co/4mfMzOsNYe

Remember, no school tomorrow December 11/19 for Gr 9-12 due to a one-day strike by @osstf. @HPEschools is 1 of 9 school boards affected. Read more in letter from Director Sean. Regular day for all K-12 students pic.twitter.com/lWrMOM5Whz

Given as of this afternoon there has been no communicated change to the status of collective bargaining a one-day full withdrawal of services is scheduled for tomorrow. All NNDSB elementary and secondary schools will be closed to students on Wednesday, December 11th, 2019.

OSSTF has announced that its members will conduct another one-day walkout at a number of school boards, including the Rainy River District School Board, on Wednesday, December 11, 2019. For more information, please visit:… https://t.co/sF5HSp1OsU

OSSTF will hold a one-day walkout in some boards on Dec. 11 if a tentative agreement is not reached. The SCDSB is one of those boards.

If it proceeds, all SCDSB secondary schools and adult learning centres will be closed on Wed. Dec. 11.

We have not received confirmation, but strongly expect that our education support workers will be striking on Wednesday, December 11. Please make plans in preparation for the closure of our elementary and secondary schools. We will communicate once we have more details. pic.twitter.com/Z3QtIR6V1c

TLDSB secondary schools and AAECs will be closed on December 11 for another one-day OSSTF strike if an agreement is not reached.

Updates will be provided to families as more info becomes available.