Most celebrate romance on Valentine’s Day, but for one Oklahoma duo, Halloween was the perfect excuse for a couple’s photo shoot with a spooky theme.
Oct 18, 2019 1:30 PM By: Global News 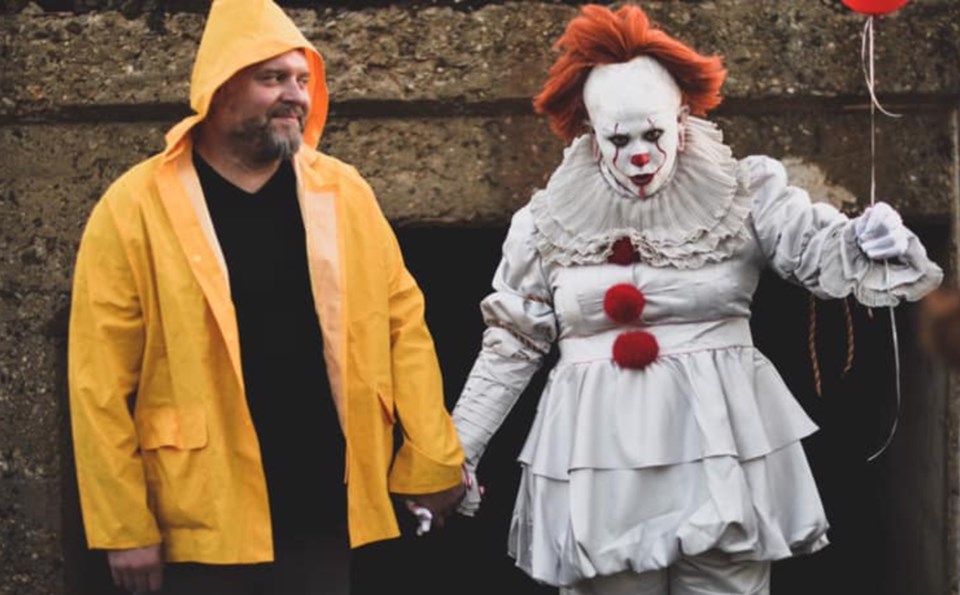 Most celebrate romance on Valentine’s Day, but for one Oklahoma duo, Halloween was the perfect excuse for a couple’s photo shoot with a spooky theme.

Maci Ann Tate had been crafting a Halloween look for months, choosing to portray the scary clown Pennywise from the movie adaptation of Stephen King’s It.

READ MORE: ‘It: Chapter Two’ review — Horror sequel sinks under its own weight

With Tate’s boyfriend, Jonathan Krell, as Georgie in his trademark bright yellow raincoat and rubber boots, she had friend and photographer Sarah Bergeron document some It scene re-enactments at a drain ditch in The Village, Okla.

“It didn’t take much persuasion for Jonathan,” Tate said. “He’s a total team player and definitely my match. He seemed more than willing to participate.”

From the frizzy red hair to the huge, white forehead, creepy teeth and piercing eyes, Tate said it took four practice rounds before she perfected the look.

“I wanted to look as different as I could from myself. I love the It movies … and I love everything about Pennywise,” she told Global News. “The finished look took me so many trials and errors. My first few attempts are pure comedy, and in total with makeup, it [took] roughly two and a half hours.”

Boyfriend Jonathan Krell was game for dressing up as ‘It’ character Georgie.

“I’ve redone the look four times, practicing over the course of roughly four months, and feel like I’ve finally mastered it as much as one person can,” she said. “I go out for Halloween every year, but never as in-depth as I did this year. This year, I wanted to go above and beyond and remember it. That’s why we took the photos.”

For most people, Halloween comes once a year, but Tate says she is always celebrating.

“My house is Halloween all year round, from taxidermy to oddities and everything in between,” she said. “I’ve been planning this since January so Halloween is always on my mind.”

One year, Tate dressed up as Jigsaw from the horror film Saw, but she says it wasn’t as intense.

A number of years ago, Maci Ann Tate dressed up as Jigsaw from the horror movie ‘Saw.’

The photo shoot wasn’t as simple as showing up and snapping pictures. Before she began, Tate reached out to her suburb’s non-emergency phone line to give them a heads-up that Pennywise would be visiting.

“I contacted the non-emergency line to inform them. I’ve spoken to the lady on the other line before and I swear she thinks I’m insane,” Tate said. “She laughed about it and was looking forward to the pictures.”

Though her suburb, The Village, is small, people were out and about that day, and Tate says they seemed a bit shocked when they spotted her.

“When people were walking by, they were scared at first, but it was quickly followed by laughter and smiles, and even kids were having a good time,” she explained. “I enjoyed getting down and dirty in the drainage ditches and am blown away by the feedback and support I’ve been given.

“As for next year, haven’t figured it out yet,” she said. “I’m sure I’ll do something just as crazy.”

Oklahoma resident Maci Ann Tate chose Pennywise because of how challenging and over-the-top the character would be.

The Oklahoma couple took photos in a drainage ditch to re-enact a scene from the ‘It’ film.