‘No way Norway’: Moose Jaw’s response to a ‘moose truce’ 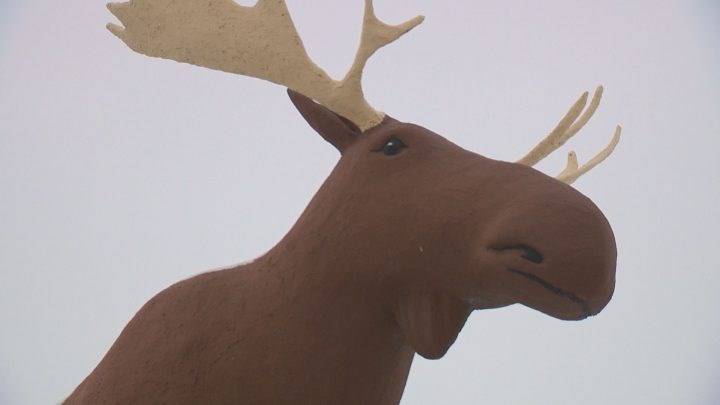 That’s the message Moose Jaw sent to Norway in the battle over the title of world’s tallest moose.

READ MORE: Mac the Moose weighs in on the battle to reclaim his title as ‘world’s tallest moose’

It’s a song written and sung by Nova Scotian Dave Carroll, proving this battle has become a national concern.

And it’s not the first the Maritimes have lent a hand.

New Brunswick’s Moosehead Breweries donated $25,000 towards the Mac the Moose fund in January.

Since then, Linda Otnes Henriksen, deputy mayor of Stor-Elvdal, has called for a truce, but Moose Jaw Mayor Fraser Tolmie doesn’t see that as a solution.

The two appeared on BBC News last week to share their story, and Tolmie made it clear he wasn’t going to back down.

The battle was sparked by the hosts of YouTube’s The Justin & Greg Show, who pointed out that Mac was dethroned by a mere 30 centimetres.

WATCH: Moose Jaw fights back in the battle of the world’s tallest moose.

Henriksen did say she was planning to make a trip to Moose Jaw by the end of February to further discuss the situation.

Police search for suspect in South Edmonton Common robbery
Jan 19, 2020 12:08 PM
Comments
We welcome your feedback and encourage you to share your thoughts on this story. We ask that you be respectful of others and their points of view, refrain from personal attacks and stay on topic. To learn about our commenting policies and how we moderate, please read our Community Guidelines.