Montrealers who have decided to go out to bars since they reopened in the city June 22 may have been caught off guard Saturday, when Public Health officials announced they want everyone who has been to a bar in Montreal since July 1 to get tested for
Jul 12, 2020 6:26 PM By: Global News 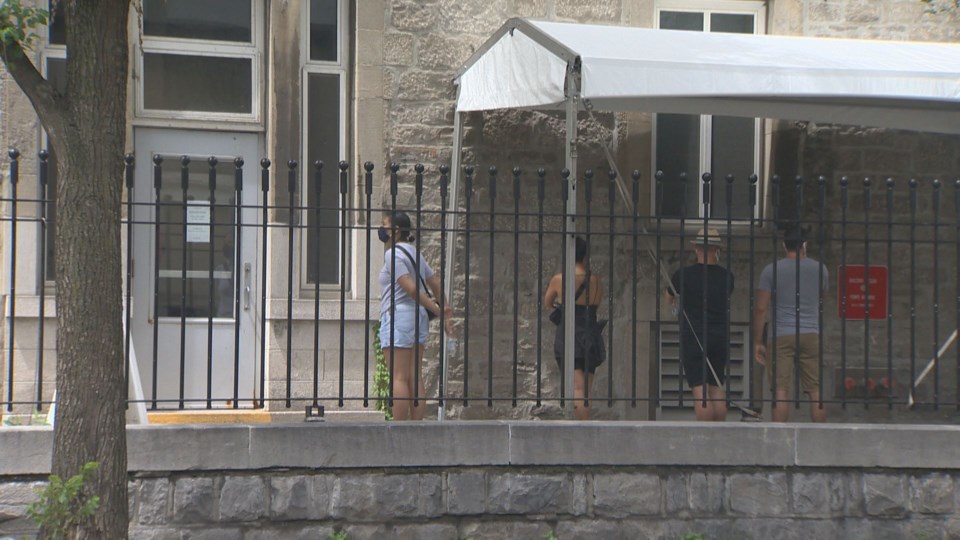 Montrealers who have decided to go out to bars since they reopened in the city June 22 may have been caught off guard Saturday, when Public Health officials announced they want everyone who has been to a bar in Montreal since July 1 to get tested for COVID-19.

“In order to get in front of it, we wanted to send out a call to the whole population rather than go bar by bar or situation by situation,” Montreal Public Health doctor David Kaiser said in an interview with Global News on Sunday.

READ MORE: Montreal public health urges all bar patrons and employees to get tested for COVID-19

Sunday morning, it seemed like a lot of people got the message. The walk-in testing clinic at the Hotel Dieu Hospital had a long lineup that wrapped around the building, though Kaiser said officials hadn’t received any word testing facilities were being overwhelmed.

He also said there had been an increase in calls to the 811 Info-Santé hotline.

“I think that is a good thing. It indicates that there seems to be an uptick, and we’ll be following the capacity and demand over the next few days to make sure that if we need to ramp it up, that that’s done,” Kaiser said.

On Saturday, Montreal Public Health sent a shockwave through the city’s bars and clubs. They announced because there have been at least eight COVID-19 cases in five different Montreal bars, they’re asking everyone who’s been to or worked at a bar since Canada day to be tested.

Kaiser said if someone was sitting outdoors, there’s a lower risk of them catching the virus. However he still wants everyone who’s been to a bar to be tested.  If people don’t have COVID-19 symptoms or have not been in contact with a known positive case, they do not need to isolate while awaiting their test results.

Public health has strategically decided not to name bars that had cases.

“What we want is for everybody who’s gone to a bar or club, a drinking establishment to maybe ask that question. ‘Well, was I in contact with a case?’ Because we really think that these few cases are the tip of a potential iceberg,” Kaiser explained.

Some establishments have shared information about outbreaks on their own. Annie’s Pub in the West Island, La Voute in the Old Port, and Nacho Libre in Rosemont have all posted details about COVID-19 cases on Facebook. Still, Kaiser thinks it could happen anywhere.

“These bars don’t stand out for having done something particularly wrong or different,” he said.

Paul Desbaillets runs the Burgundy Lion and is a member of Quebec’s New Association of Bars. He told Global News that although none of his bars have had any known COVID-19 cases, he’s ready to comply with Public Health’s request and go for a test himself. He’s even planning to share the experience online to show it’s not a big deal.

“Is it the first thing that I’d want to do waking up Monday morning? Probably not. But is it something that’s important to do? Absolutely,” he said.

Desbaillets won’t demand his customers get tested, saying that’s up to them. But he wants to show the government and the public his bars are safe.

“Everybody is doing just about all that can be done to make people feel comfortable to return and to come out and to support their local establishments,” he said.

Kaiser said the testing blitz is temporary, but can’t say how long the request will be active. Once officials are able to crunch the data, he said recommendations will likely change yet again.

Montreal bar owners threaten to open, whether the government gives them the green light or not

Montreal bar owners threaten to open, whether the government gives them the green light or not